The Dismaying Way Obama’s Presidential Library Is Being Depicted Online

Alexander S. Collie is a student at Longwood University and an HNN intern.

You may have noticed that President Barrack Obama is expected to announce the location of his presidential library soon. Type in “Obama Library” into Google’s image search engine, and you may expect to see concept art and ideas proposed for the construction of the library. You’re right, but what might come as an unexpected surprise is this photo: 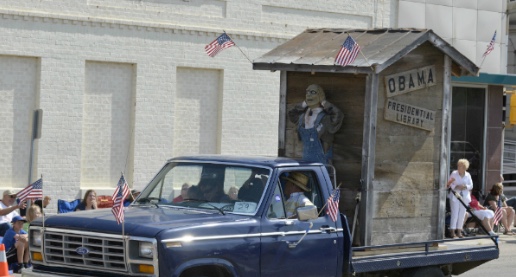 This was spotted at a Fourth of July Parade in Norfolk, Nebraska, 2014.

In Nebraska, the state Democratic party called the float one of the “worst shows of racism and disrespect for the presidency that the state has ever seen,” and some residents complained, saying they were disgusted by it. Meanwhile, parade organizers defended the float, arguing that it was nothing more than a political cartoon. 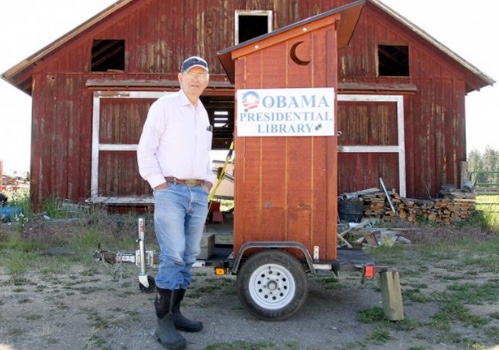 Dave Hurtt of Florence, Montana with the outhouse he made and brought to a state GOP convention in 2012.

Dave Hurtt constructed the above outhouse in Montana and brought it to a GOP Convention in Missoula, Montana in 2012. The outhouse features fake bullet holes, writing on the interior that mirrors lewd bathroom graffiti that says “For a good time call 800-Michelle (crossed-out)” and a fake birth certificate stamped “Bulls**t.” GOP officials were quick to disassociate themselves from it, while some who saw it expressed dismay at the “adolescent humor” of the outhouse. Dave Hurtt argues that he built it to merely express his dissatisfaction with the current incumbent, and not to disrespect the office of the presidency.

And then there’s this one: 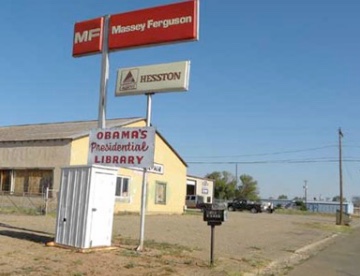 This was posted in Tucumcari, New Mexico in 2013.

The sign and outhouse combo was spotted off the side of Route 66 in Tucumcari, New Mexico. Some news outlets reported that the town was divided in its opinion of the display, and the owner refused to provide his name. The man responsible for it said he believes the President doesn’t deserve respect, and refused to take it down. It is unknown if the sign is still present.