When Did Mandatory Vaccinations Become Common?

Cristina Valldejuli, a graduate of the University of Iowa, is an HNN intern. 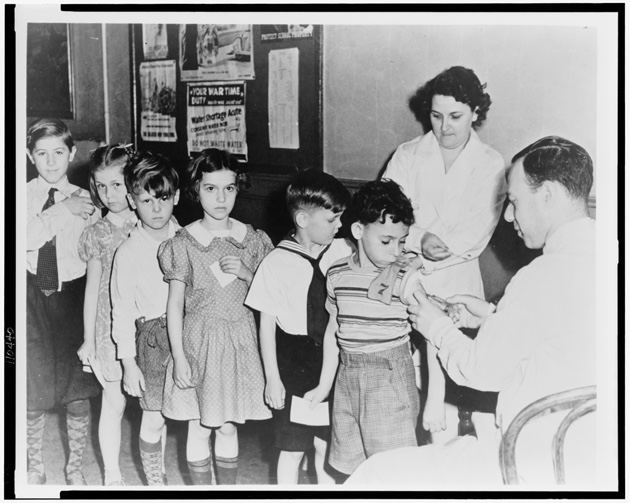 Herbal panaceas, special cloths, strict diets, cool drinks, eschewing fireplaces, and the edict that a patient’s bedclothes be no higher than the patient’s waist—these were the prescriptions of the pre-inoculation era when someone contracted smallpox. For centuries pandemic diseases devastated much of mankind. Hardly more than a century ago, 20% of children fell to disease before the age of five, a staggering 20% more died before entering into adolescence, survivors finding little recourse in adulthood from the scourges of the age—diphtheria, yellow fever, small pox, measles, pertussis, and a deadly handful of others. It was in such a dire period that the first federal health mandates were made and bore the political origins of compulsory vaccination.

A string of yellow fever outbreaks erupted between 1793 and 1798, taking thousands of lives and leaving the nation dizzy with loss. Shortly after the outbreaks, John Adams signed and established the first federal quarantine law against the recurrent epidemics of yellow fever. According to Carleton B. Chapman, an MD, the Federal Quarantine Proposal of 1796 met “virtually no opposition.”

A couple of years later, in 1798, Congress returned to the issue after a high percentage of marine workers succumbed to yellow fever. For the first time ever,, Congress required privately employed sailors to own insurance and authorized the collection of a monthly payroll tax to fund it. John Adams promptly signed the law when it reached his desk.

Chapman states that few founders contested the federal government’s responsibility to protect the population from epidemics like yellow fever. The real issue, he reports, “was which level of government should enact and enforce quarantine.” This was the same question that arose years later when vaccination gained popularity in the medical field. Wendy K. Marine, George J. Annas, and Leonard Glantz explain that while Jeffersonians were uncomfortable with a strong federal role, Jefferson himself favored a bill that required the federal government to “guarantee and distribute effective vaccine” and signed it into law in 1813. Ultimately, Congress decided that the best approach was to leave the implementation of vaccination efforts up to state and local authorities.

America had many years of experience with vaccinations. The Puritans provided for vaccinations against smallpox after an outbreak devastated New England. But immunizations weren’t required anywhere in the United States until 1809, when Boston imposed mandatory vaccination to quell recurring outbreaks of smallpox that patchy, voluntary vaccination was permitting. Subsequently, some states adopted similar legislation. Scholars Alexandra Minna Stern and Howard Markel report that incidences of smallpox markedly declined between 1802 and 1840, but made major reappearances in the 1830s and 1870s when public memory of life imperiled by disease had dimmed and “irregular physicians” of the 1850s challenged the practice of immunization with “unorthodox medical theories.” One skeptical leader, British immigrant and reformer William Tebb, claimed, facts notwithstanding, that vaccination induced 80% of smallpox cases. Further, he alleged 25,000 children were “slaughtered” in Britain each year thanks to the program. The arguments were preposterous and contrary to evidence, but resonated with the public.

There’s a striking parallel to current anti-vaxxer scares playing on people’s fears, like the discredited and recanted study that alleged vaccination induced autism. Anti-vaccinationist Dr. J.F. Banton warned that vaccination would introduce “bioplasm” into the bloodstream and expose subjects to the “vices, passions, and diseases of the cow.” Stern and Markel relate that critics of vaccination claimed it was a “destructive and potentially defiling procedure of heroic medicine” akin to blood-letting. Many working-class people voiced the fear you hear today that the work of scientists was an “assault on their communities by the ruling class” and an “intrusion of their privacy and bodily integrity.”

The upshot? Smallpox cases surged to numbers that had not been seen in decades. Consequently, many states enacted new vaccination laws while others began enforcing existing laws. This, in turn, stirred increased opposition. California, Illinois, Indiana, Minnesota, Utah, West Virginia, and Wisconsin, repealed compulsory laws in response to the agitation.

Cambridge, Massachusetts found itself in the throes of a smallpox outbreak in 1902. Disease beset the area and threatened to spread into a major epidemic. To stop this from happening in the future the state passed a law giving city boards of health the authority to mandate vaccinations. But some people objected. When officials ordered Henning Jacobson, a Swedish immigrant and Lutheran pastor to be vaccinated, he refused treatment on grounds of past harm, saying both he and his son had experienced “extreme suffering.” Jacobson’s status as an ethnic and religious minority likely contributed to his decision to refuse treatment. His distrust of authority is shared today by many African Americans, who well remember that racist scientists performed experiments such as the Tuskegee syphilis study on people of color.

In a sense, Jacobson represented the quintessential anti-vaxxer, which may be why his case caught the eye of the anti-vaccination league, which encouraged Jacobson’s recalcitrance and may or may not have provided the Harvard-trained James W. Pickering and Henry Ballard to represent him in court. Eventually the case made its way to the United States Supreme Court. In 1905 the Supreme Court ruled 7-2 in favor of the state against Jacobson; the Court having found that an immunization rate of 85-90 percent confers protection on the entire group. The landmark Supreme Court case Jacobson v Massachusetts served as the precedent for future court decisions and the foundation of public health laws.

The Supreme Court considered the ordinance again in 1922 when some objected to the requirement that school children be vaccinated. Once again, the principle of mandatory vaccination was upheld. By 1969 compulsory immunization laws in twelve states—Georgia, Hawaii, Illinois, Kansas, Kentucky, Louisiana, Massachusetts, Michigan, Mississippi, Rhode Island, Tennessee, and West Virginia—had expanded to include smallpox, measles, poliomyelitis, diphtheria, pertussis, and tetanus. Meanwhile, seven states—Arizona, California, Minnesota, North Dakota, South Dakota, Utah, and Washington—found it unlawful to compel citizens to be vaccinated for smallpox while still requiring pre-enrollment immunization for other diseases like measles.