The Anthropocene began with species exchange between Old and New Worlds

by Simon Lewis and Mark Maslin

Simon Lewis is a Reader in Global Change Science at University of Leeds and at UCL. Mark Maslin is a professor of Climatology at UCL.

Time is divided by geologists according to marked shifts in the Earth’s state. Human activity has clearly altered the land surface, oceans and atmosphere, and re-ordered life on Earth. This suggests that the planet has entered a new human-dominated geological epoch, called the Anthropocene.

However there has been significant scientific debate concerning exactly when this epoch began. We argue, in a new paper in Nature, that the Anthropocene began with the irreversible exchange of species between the New and Old Worlds following the 1492 arrival of Europeans in the Americas. The resulting global networks of trade led to a rapid, repeated, cross-ocean exchange of species, which is without precedent in Earth’s history. It provides an unambiguous event after which the impacts of human activity became global and set Earth on a new trajectory. 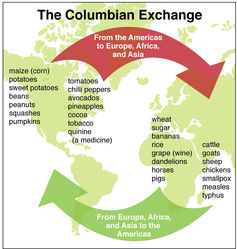 Defining the beginning of the Anthropocene as a formal geologic unit of time requires two requirements to be met. First, that there is evidence of long-term changes to the Earth as a global system. Second, that there is a marker of a global event that can be dated in layers of rock, sediment from the ocean floor, or ancient glacier ice. This marker is called a Global Stratotype Section and Point (GSSP), also known as a “golden spike”. GSSPs have been used to define geological time for the past 600m years.

In our research we found that most previously proposed Anthropocene start dates, including the earliest detectable human impacts through farming and historic events such as the start of the industrial revolution, should be rejected. They are not based on a globally synchronous markers and may not be permanent changes that could still be seen in a few million years – the time span of a typical epoch.

We found only two GSSP dates that fit. There was the 1610 Orbis (Latin for “world”) spike, when the impacts of the collision of the New and Old Worlds a century earlier were first felt globally. The species exchange between the Old and New Worlds is noted in the fossil record at this time, coupled with a marked drop in atmospheric carbon dioxide, centred on 1610. Then there was the 1964 Bomb Spike, the peak in radionuclide fallout from nuclear weapons testing, which is coincident with the acceleration of very recent global environmental changes.

While both GSSP dates appear to adhere to the criteria for the beginning of the Anthropocene, we suggest that overall, 1610 is the strongest contender.

Unintended consequences of the European invasion

A drop in CO2, centred on 1610, was a result of European arrival in the Americas. This arrival led to the deaths of around 50m indigenous people, most within a few decades of the 16th century and mostly due to smallpox. The resulting near-cessation of farming across a continent and re-growth of Latin American forests and other vegetation removed enough carbon dioxide from the atmosphere to produce a pronounced dip in CO2 seen in Antarctic ice core records.

The decline in carbon dioxide fits the formal requirement of a dated global environmental change that is captured and preserved in natural material. The irreversible exchange of species fits the other requirement of evidence of long-lasting changes to the Earth. For example, fossil pollen of maize, a Latin American species, first appears in marine sediment in Europe in 1600, becoming common over subsequent centuries.

In geological terms the 1610 drop in atmospheric carbon dioxide is also associated with the coolest period of the Little Ice Age – a period between about 1300 and 1870 when North America and Europe experienced colder winters – when many changes occurred in geological deposits worldwide. The boundary therefore also marks Earth’s last globally synchronous cool moment before the onset of the long-term global warmth of the Anthropocene.

The second possible starting point which we and other research groups have identified is the 1964 peak in radionuclide fallout.

The advantage of this GSSP is that it is recorded in many geological deposits worldwide and it coincides with the huge acceleration of human impacts starting in the 1950s that continues to the present. Yet, from a geological perspective, there is one key disadvantage of this date: while nuclear weapons could dramatically alter the planet’s environment, so far they haven’t. The radioactive fallout from bomb tests is a very good marker, but is not itself an Earth-changing event leading to long-lasting changes.

The start of the industrial revolution has commonly been suggested as the beginning of the Anthropocene. It is a clear turning point in human history and the rise of atmospheric carbon dioxide from fossil fuel use is a critically important long-term global environmental change.

However, there is a lack of a suitable golden spike at this time because most impacts were local – while smog soon covered towns in the north of England, most of the rest of the world continued largely untouched. Meanwhile the global exponential rise in carbon dioxide is too smooth an increase to form a marker.

We could instead date the Anthropocene from a hand-picked year, not tied to a specific event in the fossil or atmospheric record, but tied instead to broad change in the Earth as a system – this is how geologists date eras beyond 600m years ago where well-preserved rock sections and specific events are hard to find. However picking the year 1760 or 1800, or when ever, is fraught with difficulty as any date chosen would be open to challenge as being arbitrary.

Humans back at the centre of our universe

Formally ratifying the Anthropocene as an epoch requires the agreement of a series of geological committees. If it is adopted, we consider it a defining moment for humans, a time that has fundamentally changed our relationship with our environment.

Embracing the Anthropocene essentially reverses 500 years of scientific discoveries that have moved humans to a position of increasing insignificance, from the 16th-century Copernican revolution and the modern understanding that our sun is one of 1024 stars in the universe, to the 19th-century Darwinian revolution that established humans as merely a twig on the tree of life with no special origin.

A 21st-century adoption of the Anthropocene reverses this insignificance: humans are not passive observers of Earth but central to it, where the future of the only place where life is known to exist is being determined by our actions.

A more widespread recognition that human actions are driving far reaching changes to the life-supporting infrastructure of Earth will have implications for our philosophical, social, economic and political views of our environment. But we should not despair. The power that humans wield is unlike any other force of nature, it is reflexive and therefore can be used, withdrawn or modified. The first stage of course is recognising it.