More than 80,000 People Died and Hardly Anyone Paid Attention?

Saotome Katsumoto is the author of "The Great Tokyo Air Raid" (Iwanami Shoten, 1971) and a key figure in memorializing the Tokyo firebombing raids. He is currently Director of the Center of the Tokyo Raids and War Damages. At the age of 83, he is still active as a writer and speaker. This article was first published on the website of the Asia-Pacific Journal, where more information is available about the raid. 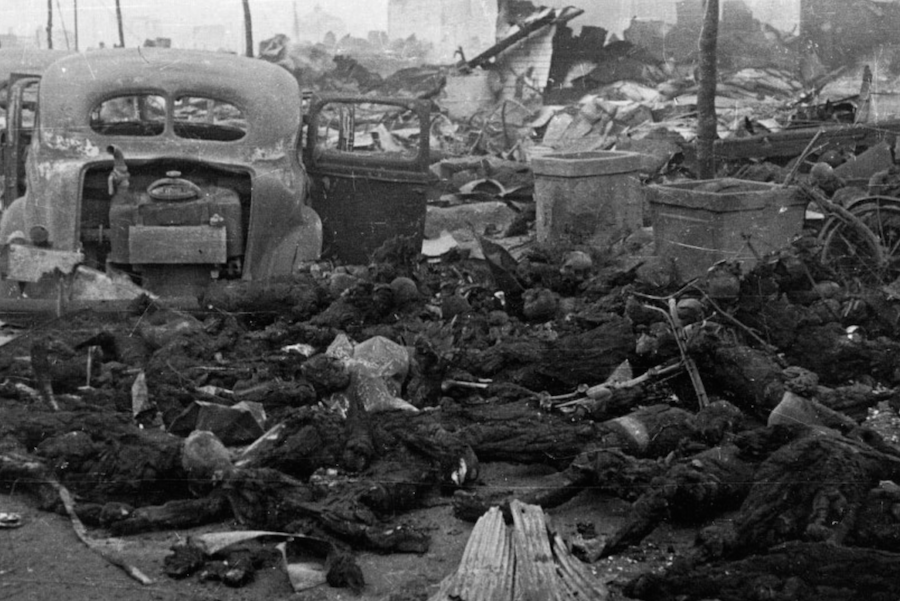 At about two in the morning on June 11, 1967, on a construction site on the Tozai subway line at Monzen-nakacho in the Fukagawa district of Koto Ward in Tokyo, workmen digging up the ground to repair damage to the track discovered something very strange. Below the pavement, at a depth of 15 meters, they found what appeared to be the remains of an air raid shelter. Inside it were six human skeletons huddled close together. Two of them were children and the other four adults. Their gender could not be determined. The positions of the bones suggested they had been cowering in terror, and one of the adult skeletons was cradling two Buddhist memorial tablets in its arms. There were signs that the shelter had been engulfed in flames. Burn marks were visible on one set of bones, and a rusted steel helmet and decayed water bucket lay close by. For the local residents who came to witness it, this discovery brought back memories of the massive air raid over the Shitamachi, the low-lying eastern district of Tokyo, in the early hours of March 10, 1945.

What were these remains discovered 22 years after the war? Who were the six victims and where were they from? The incident was reported in the Mainichi Shimbun newspaper on June 13. A clue to the identity of the six bodies was provided by the inscriptions on the memorial tablets. The next day, the newspaper reported that Tsuzuki Shizuo7, a company president living in Kamiogi, Suginami Ward, had claimed that the remains were those of his relatives and expressed his wish to collect them.

A friend of Shizuo’s had seen the article on June 13 and told him about it. According to Shizuo, at the time of the air raid just after midnight on March 10, 1945, he was at his wife’s parents’ home together with his wife and their four year-old daughter. When the raid started, seven family members – Shizuo, his wife and daughter, and his wife’s mother with her two other daughters and grandchild – had set out to evacuate to a nearby elementary school. On the way, his mother-in-law noticed that she had forgotten something important and Shizuo went back to get it. When he returned, the others were nowhere to be found. He never saw them again.

Thus Tsuzuki Shizuo came to confront the remains of his wife and child twenty-two years later.

When I read that newspaper article, I immediately wanted to hear Tsuzuki Shizuo’s account of that terrible night and pray for the souls of the victims, but I could not muster the courage to meet him. After all, I was a mere writer and had my own vivid memories of the Great Tokyo Air Raid in which Shizuo lost his wife, child, and other relatives. I was one of those who ran this way and that in frantic efforts to escape the inferno and barely survived. Since then I have considered it my duty to faithfully record the horrific events of that night and convey the reality of war. If I possibly could, I wanted to leave an accurate historical record for future generations.

Considering that at least 80,0008 people died and over a million lost their homes and suffered immeasurable hardships, there are incredibly few written records of the Great Tokyo Air Raid. This was particularly true of the eight years prior to the publication of the Tokyo Metropolitan War Damage Records compiled by the Tokyo Metropolis in 1953 and Photographs of the Great Tokyo Air Raid published in the same year. Since then no records of similar scale have been compiled and only two or three books by individual authors have been published. The only comprehensive document, the Tokyo Metropolitan War Damage Records, is not readily accessible, nor are its statistical sections easy for general readers to understand. Furthermore, its descriptions deliberately omit accounts of the emotional suffering of the victims. Such documents as these cannot convey the terrible reality or an overall picture of the tragedy of the Great Tokyo Air Raid.

It is easy enough to state that more than 80,000 people lost their lives, but sometimes I imagine how it would look if all these victims, in their final death throes, were gathered together in the same place. However much I try to banish this vision from my mind, I am left staring helplessly at it. My decision in the summer of 1970, a quarter of a century after the end of the war, to visit victims of the Great Tokyo Air Raid and record their hitherto silent voices was not simply due to my sense of duty as a fellow survivor. To grasp my own pacifist ideology, I needed to ascertain the truth of the war twenty-five years earlier and to think in my own way about the fates of the 80,000 victims on that terrible night.

However, my approach to Tsuzuki Shizuo met with an unexpectedly firm refusal. I telephoned him to ask if we could meet to talk about his experience but he told me he could not bear to relive it. It is hard for us to reopen past wounds, and the feelings of a man who had to confront the skeletal remains of his wife and child after they had been buried underground for twenty-two years are impossible to imagine. What would be the point of talking about such things to an unknown writer? The emotional scars left on the people of Tokyo, particularly ordinary working people, are not something they can easily talk about. I understand that only too well, for I was a boy of twelve who experienced the trauma of staring death in the face.

In the summer of 1970, twenty-five years after the end of the war, I walked around Tokyo every day with a notebook and pen, visiting families of the victims to interview them about their experiences of the air raids, particularly the Great Tokyo Air Raid of March 10, 1945. I recorded the testimonies of over twenty people either directly or at second hand. I was turned away at the door many times, and not one of those who agreed to be interviewed was calm or composed. As if on cue, they all broke down during their accounts and, sitting there with my pen in hand, I was unable to look up at them. The scars are still deep. These wounds will never heal as long as they live. For them the “postwar” period will never end.

Understanding this state of mind made me all the more determined to get the victims to open up, revisit deeply buried memories, and describe their experiences. I had to reveal clearly the reality of the Great Tokyo Air Raid, a reality that was much worse than tragic. However painful it might be, confronting people’s actual experience of war will surely help to build a firm foothold for peace.

In this book, in addition to the author and Metropolitan Police Department photographer Koyo Ishikawa, eight citizens of the Shitamachi district of Tokyo describe their experiences in the Great Tokyo Air Raid9. Through the living testimonies of these ordinary people I have strived to present a clear picture of that night of indiscriminate firebombing. The recounting of these experiences was painful for both the speakers and the listener, but for the sake of those who bore this pain and for all those who lost their lives, I have attempted to faithfully record the events of March 10, 1945.

The following links are to victims’ testimonies from The Great Tokyo Air Raid (the ages given are at the time of the air raid):10