Why Historians Should Use Twitter: An Interview with Katrina Gulliver

Alexander S. Collie is a student at Longwood University and an HNN intern. 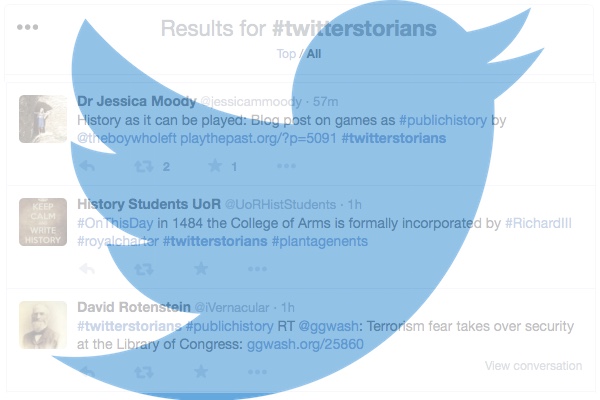 Katrina Gulliver is the founder of Twitterstorians, one of the leading Twitter accounts featuring tweets by and about historians. She is a lecturer at the University of New South Wales. She holds a PhD from Cambridge University and is the author of Modern Women in China and Japan: Gender, Feminism and Global Modernity Between the Wars (2012).

Tweets are limited to only 140 characters. Why should a historian consider using twitter?

Twitter is a great way to not only share ideas, but also keep up with discussions both within and outside academe. Information on many fast-moving news events is now more available on social media than on traditional news media.

Social media, especially twitter, has played a role in several high profile events over the last few years, notably during the Arab Spring, in which activists used twitter and Facebook to coordinate and stay updated on events. In your opinion, how influential was social media on the Arab Spring?

I'm not an expert on the Middle East, don't really feel qualified to answer that one.

On your website you mention that you are ranked as the most influential historian on twitter and founder of the hashtag “twitterstorian.” Can you explain what prompted you to start the twitterstorian movement and how it developed?

I was just sitting in my flat in Cambridge and wondering how to find other historians on twitter. I discussed the possible hashtag with a few others on twitter, and it went from there.

Did you ever think that the twitterstorian hashtag would become such a success?

At its inception, my main idea was to allow historians to identify themselves and each other. It's grown in ways I wouldn't have expected.

How do you define success?

On social media: for me it's been finding colleagues (and friends) who I would not have met any other way.

What makes a hashtag successful on twitter, and what qualities does a post or video need to have in order to become a viral sensation?

That seems very difficult to answer. Look at the kinds of things that have gone viral, be it the ice bucket challenge, or the blue/black-gold/white dress! Some things just seem to strike at the right moment. If I knew the secret to viral success, I'd make a fortune!

You have a large social media presence, with over 4,000 followers on twitter alone. How have you used this network to further your studies and career?

It has definitely helped me develop more professional relationships, which have benefited me in different ways. When I hosted a conference in Germany, several of the participants were people I had come to know through social media. In addition I've been able to get tips on research leads from twitter followers, which has been very useful.

Have users of the twitterstorian hashtag benefitted from its usage in a way that wouldn’t have been possible before they started using the hashtag?

That's impossible for me to say.

Has any tweet been consequential? Did it prompt someone to rewrite a dissertation or pursue new research?

We’re living in a time where the world has never been more connected, on a commercial, political and personal level. Twitter sees over 500 million tweets per day and Facebook has more than 1 billion users. How do you foresee future historians using this kind of information years from now to gain insights into life in the 21st century?

That depends on how much of this data survives. We're trusting social media companies to back up everything if we want it to be a future resource! (or just trusting that the NSA has it all filed away...)

Newspaper articles and magazines are a common element in historical research. Do you think that tweets and facebook statuses will eventually be cited in dissertations?

I think Facebook and other social media are already being used by historians of recent events (such as the Arab spring), just as comments on social media have been the basis for criminal trials.

I think I have about 400 in my favorites list right now!

Come on in, the water's fine!

Finally, can you summarize benefits of having a twitter account and why historians should become engaged in online communities in 140 characters or less?

Twitter can help you find people interested in all historical topics, and make you think of your work in different ways.