Selma Is Now? No, Not Really.

by James B. LaGrand 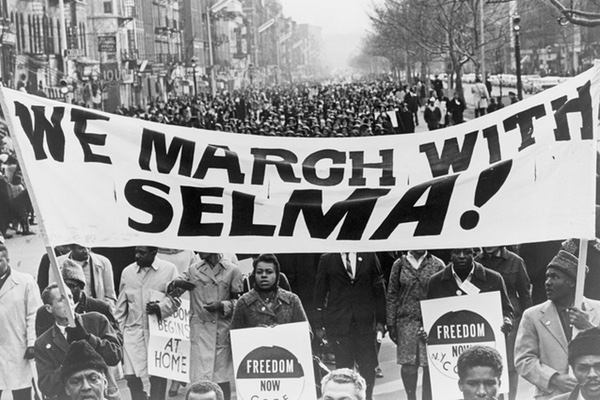 Many of us who teach History like to tell our students that if you look carefully, you can find history everywhere. Sometimes, it even turns up at the Oscar awards.

For many viewers, the highlight of this year’s awards show was the performance of the song “Glory.” Written for the movie Selma, the song evokes the civil rights movement’s themes of freedom and justice, and connects them to our time. At the Oscars, both lyrics and choreography made clear this intended connection between past and present. Rapper Lonnie Lynn (AKA: Common) sang: “That’s why Rosa sat on the bus / That’s why we walk through Ferguson with our hands up,” while a choir representing the 1965 marchers assembled. The whole performance took place against the backdrop of a set depicting the Edmund Pettus Bridge and photos of the original marchers being projected on a giant screen.

Later, in his acceptance remarks after winning the Oscar for Best Original Song, co-writer John Legend again connected past and present. He tried to set straight any viewers who might be thinking that 1965 was a long time ago. “Selma is now because the struggle for justice is right now.”

Statements similar to Legend’s “Selma is now” have been made many times in the months since Michael Brown’s tragic death at the hands of policeman Darren Wilson in Ferguson, Missouri. In fact, Ferguson has become a Rorschach test – not just on the state of race relations today, but on the past as well through the power of historical analogy. Like John Legend, congressman and civil rights veteran John Lewis has compared Ferguson to Selma in 1965. On college campuses, analogies comparing Ferguson to 1950s Little Rock and Michael Brown to Emmett Till have been heard.

Some have gone deeper into America’s history of race relations looking for analogies. James Lawson, who during the 1950s and 1960s trained hundreds of young people in non-violence resistance, today calls “what happened in Ferguson lynching.” So too historian Jelani Cobb writes about “the long shadow of lynching” in Ferguson. Some protesters in St. Louis and Berkeley dramatized their frustration at events in Ferguson through mock lynchings.

These statements and actions are all rooted in the belief that little to nothing has changed in race relations from the Jim Crow era of the 1890s-1950s to the present day. If one of the tasks of History is to assess the complex relationship between change and continuity over time, these voices suggest that on the issue of race and race relations, the answer is pretty simple. 2014 = 1965 or 1955 or the 1890s.

But in looking at the past, it’s hard to make these claims hold up. The Jim Crow era stands as a distinctly grim, brutal period in America’s history for its Black citizens. After the end of Reconstruction, Black men who had recently won the franchise had it effectively taken away. The promise that Black Americans would own the product of their labor too became a bitter lie. All public spaces in the Jim Crow South became divided by the color line.

This racial code was enforced through lynchings and other forms of brutal violence. The Equal Justice Initiative has recently documented 3,959 African-Americans lynched between 1877 and 1950. Lynch mobs cast a wide net. They targeted Black men accused of crimes, those accused or suspected of sexual relations with white women, and those seen as being “impudent to white man,” in the words of one lynching record. Lynchings were barbaric, often involving the ritualistic burning and dismemberment of dead bodies. Not for nothing do many historians refer to 1890-1920 as the nadir of African-American history.

The civil rights movement of the 1940s-1960s was remarkably successful in changing Jim Crow America. It ended legal segregation and mass disfranchisement. By 1950, it had exposed lynchings to the point that they’d almost become a thing of the past. This chapter of Black history is increasingly well-known, partly due to programming in schools and on college campuses during Black History Month, which recently drew to a close for another year. But there’s more to it than that. In our time, though, Black history isn’t confined to a single month. History courses at the high school and college level have been transformed by new findings and research in African-American history. Today’s students today are as familiar with Martin Luther King as with George Washington.

All this has given the civil rights movement a distinct place in Americans’ civic consciousness and language. It’s been sanctified—both religiously and politically. In the words of one-time freedom rider John Lewis, the movement was a “holy crusade.” Ever since, it has possessed a kind of moral capital in American public life. To draw on the history, themes, and individuals of the civil rights movement today is to give a cause greater significance and urgency. In the months since Ferguson, many activists have done so--at large protest gatherings, teach-ins, and even at the Oscars.

They see their motives are earnest. By their way of thinking, a continued insistence that little to nothing has changed in race relations will hold white Americans’ feet to the fire. This approach will confront and challenge them, and prevent them from becoming prideful or complacent. Some teachers and administrators on college campuses say that a focus on continuity in race relations will allow for “teaching opportunities.”

But what if such a determined focus on racial continuity from the 1890s to today doesn’t bring about these results? The discipline of History is based on a reasonable confidence about concrete, particular things, not just a fuzzy mood or spirit. Activists who tout continuity believe that their cause will result in “consciousness-raising” about a range of racial issues. But it’s just as likely to lead to cynicism and disengagement if it’s thought that events have been manipulated and comparisons over-drawn. It now seems clear that the media-driven dissemination of the “hands up don’t shoot” meme was just such a manipulation in the face of contradictory evidence. Young people today have grown up in a time of dramatic racial change in many areas. Over-broad and exaggerated historical analogies to the Jim Crow and civil rights eras threaten to divide students (and other Americans) between those who know that “race matters” and those who inclined to disengage from racial issues all together.

This risk of disengagement is particularly great for millennials. A recent Pew study of this generation, which includes today’s college students, found that they tend to lack confidence in institutions and authorities. They’re more cynical and skeptical about these than their elders. Today’s millennial college students are especially unlikely to be won over by excessive analogies between past and present.

None of this is to say that there aren’t real racial problems in America today--unemployment, inadequate education, and recidivism in the criminal justice system, among others. We don’t live in a post-racial America. But neither do we live in Jim Crow or 1950s America, despite what many recent analogies would suggest. Not every overbearing authority can be a Bull Connor, not every place of tension is Selma in 1965 or Little Rock in 1957. Not every mistreatment can be labeled a lynching. Otherwise, the power and influence of these historical people and places and practices may be lost.