This Is What’s Missing from Black History Month

Mike McQuillan teaches history at the Brooklyn School for Global Studies, New York. He is a founding member of the Hope in the Cities national network. 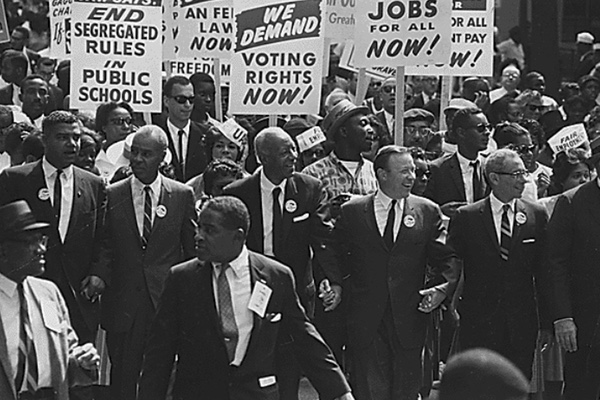 Civil Rights March on Washington, leaders marching from the Washington Monument to the Lincoln Memorial.  Wikipedia

“We had separate water fountains, bathrooms and bus seats. But Rosa Parks and Martin Luther King fixed things.” Frankie once said that in class but he wasn’t the first and he won’t be the last. Schools often scratch the surface of civil rights, teaching the same few stories, about the same few famed people. This trivialization denies young people their rightful awareness of Jim Crow racism’s systemic nature, along with the law-breaking and abuse of power by southern state and local officials that sustained it. It prevents our youth from inheriting the magnificent legacy of unsung heroes and heroines who risked their lives for justice and won. Their struggles and sacrifices provoked Federal intervention on integration’s behalf and produced Congressional passage of civil rights legislation.

All of this proves King’s insight that “every person has an innate capacity for leadership.” But some people benefit when others do just what they are told and let their minds sleep. I want my students awake – to feel challenged and challenge me as practice for challenging injustice wherever they find it. King risked precious political and financial support when he opposed the Vietnam War but he spoke out because it was right. I want my students to find their own courage. Parks on the bus was not the “simple seamstress” President Clinton once called her; she was an active leader of Montgomery’s NAACP chapter at the time of her arrest, and thus her arrest sparked an organization’s historic reaction. I want my students to transcend isolation and find allies because no one alone can improve our society. It indeed “takes a village” and more. The exclusive focus on “Martin and Rosa,” with the disclaimer that “Malcolm X was for violence” traps us all in lies. Brianna asked me in class why “year after year it is always the same.” I asked her who benefits when young people know less about racism’s raw force or about unsung heroes and heroines who stood up against it. I encouraged her later on with her answer in mind to write a letter to the editor of the New York Times; perhaps a student’s letter would more likely be published than mine, and policy-makers would see it.

Rachel Robinson, Jackie Robinson’s wife, said that “in remembering him I tend to deemphasize him as a ballplayer and emphasize him as an informal civil rights leader. That’s the part that drops out, that people forget.” Her statement on the Library of

Congress website clued me in just two years ago to how much he had one – his heroism in refusing to yield his seat to a racist enlisted man on an army bus at Fort hood in Texas in 1944, for example, eleven years before Parks’s Alabama action. Robinson, who as an officer outranked his assailant, was court-martialed but acquitted in a memorable but little-known episode that places her brave deed in context among constant southern “Jim Crow” barriers to Black life.

Robinson pursued political and economic justice throughout later life. He co-founded Harlem’s Freedom National Bank (New York City’s first African-American owned and operated financial institution). As America’s first Black corporate executive after baseball, Robinson used his pioneering vice-presidency at Chock Full O’ Nuts to gain fair pay and treatment for people of color employed there. Robinson had already been the first African-American actor to be cast in a leading film role as himself in the 1950’s “Jackie Robinson story.” He stood with Dr. King in Birmingham after the church bombing that killed four little girls. He wrote firm long letters to five consecutive Presidents of the United States to demand they devote full powers to enforce integration in housing, employment and education, in accordance with federal laws and our democratic ideals.

“Seventeen million Negroes cannot do as you suggest and wait for the hearts of men to change,” wrote Robinson on May 13, 1958 to Dwight Eisenhower. “We want to enjoy now the rights that we feel we are entitled to as Americans. This we cannot do unless we pursue aggressively goals which all other Americans achieved over 150 years ago.” He later stressed the need to protect King, Medgar Evers and other heroic figures against the predatory spying and violence of local authorities – such as the Mississippi Sovereignty Commission – who colluded with the Ku Klux Klan. One hero was Dr. Gilbert Mason, a Howard University-educated physician, who in April 1960 led successful “wade-in” protests against Biloxi, Mississippi’s beach segregation – and, along with his allies, was arrested and attacked.

Bayard Rustin warned Tuskegee Institute’s 1970 graduating class, “the generation raised on protest,” that “history has alternating periods of activism and stagnation, hope and despair.” But why wait to find out which we are in and whether our students will be involved? Truth hurts but inspires. It transcends the dance of white denial/black anger that prevents interracial conversation, collaboration and coalition.

If we are ever to make democracy real, we need all that knowledge and more.