What’s the Matter with Kansas? Nothing

by Jason Weeden and Robert Kurzban

Jason Weeden is a lawyer and psychology researcher (on Twitter @JasonWeeden). Robert Kurzban is professor of psychology at the University of Pennsylvania (on Twitter @rkurzban). They are the authors of The Hidden Agenda of the Political Mind (Princeton). 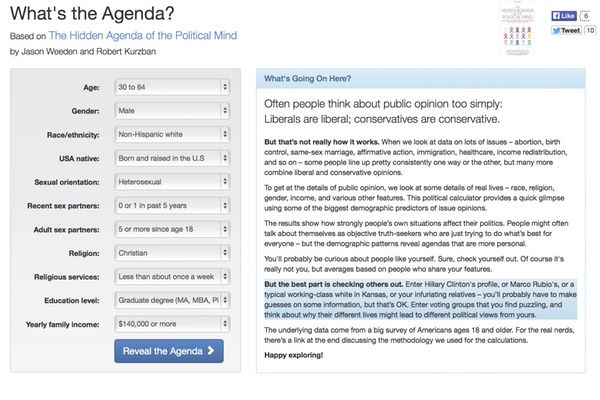 Having written a book on the role of self-interest in the public’s political opinions, we hear some repeated objections. One is about how Warren Buffett wanting his taxes raised implies that self-interest isn’t a big deal in politics. Our response is that this is like saying that an unusually cold winter day in the Northeast is powerful evidence against global warming. In truth, wealthy people are – on average – usually conservative on progressive taxes, spending on the poor, and related redistribution policies. We’re doing social science; we leave Buffett’s idiosyncrasies to his biographers. 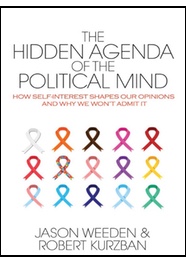 Another thing we hear – a lot – is about Kansas. What’s the matter with all those working class whites? Doesn’t their support for Republicans mean that they’ve been tricked into voting against their self-interest? The answer to this objection is both more complicated and more interesting.

Political scientists have, for years, pointed out that a clear pattern in large datasets is that poorer whites are substantially less likely to prefer Republicans than richer whites. As Andrew Gelman has explained, for example, while poorer states are often redder states, poorer people within the states are typically bluer than richer people. It’s not that income is irrelevant to party preferences; it’s just that it’s not the only relevant factor.

Our own work has explored some of those other relevant factors. Consider the following. Researchers sometimes send identical resumes to employers, giving some stereotypically white names and others stereotypically African American names. The results are that the presumably white applicants typically receive markedly more positive responses than the latter. Racial prejudice is real and tangible.

It’s easy to see who is tangibly harmed by prejudice. And, for many of us, it’s tempting to argue that eliminating prejudice is best for everyone. In some senses, this is probably true.

The biggest gains from discrimination are enjoyed by those who are white, Christian, heterosexual, and so on, especially people in these categories who would otherwise struggle to succeed in a pure meritocracy. Indeed, when we looked at data on the public’s political opinions, we found, consistently, that Americans with less education and intelligence often hold discriminatory opinions in line with their own group features. Less educated Christians are especially likely to favor school prayer. Less educated heterosexuals are especially likely to oppose same-sex marriage. Less educated native-born folks are especially likely to oppose immigration. It’s not that any one of these issues is itself a make-or-break economic issue; but these kinds of issues are expressions of more general views about discrimination, something that reaches over into people’s tangible well-being in fairly obvious ways.

Another set of issues we’ve analyzed relate to sexual and reproductive lifestyles – whether premarital sex should be moralized, whether birth control and abortion services should be widely available, whether pornography and recreational drugs should be legal. People with Sex and the City lifestyles (who party and sleep around while wanting to delay or avoid having children) are tangibly better off when other people don’t impose social or legal sanctions on them for doing so.

But it’s also the case that some other folks – those who look more like the Andersons from Father Knows Best, trying to maintain stable marriages with more kids – have a harder time keeping their own lives running smoothly when surrounded by such lax attitudes. It’s like trying to stick to a diet in an office where everyone’s got donuts and candy on their desks. Again, there are tangible things at stake. If Mr. Anderson runs off with one of the women from Sex and the City, this is no mere “symbolic” or “cultural” issue for Mrs. Anderson.

These kinds of lifestyle issues are, of course, related to religion, but like so many relationships, it’s complicated. Regular churchgoers do often have conservative views on sexual and reproductive issues. The usual explanation for these views is that some people are raised religious, end up themselves being religious, and their religiousness causes them to adopt these conservative views.

But our research shows that this is incomplete. In fact, when we looked at a study that tracked a large group of Americans from their teens to late-20s, we found that lots of kids from religious households ended up adopting those Sex and the City lifestyles, and, when they did, the overwhelming majority stopped going to church regularly. Many others adopted Father Knows Best lifestyles despite less religious upbringings, and, when they made this transition, a significant portion became regular churchgoers.

People often calibrate their religious involvement to their own lifestyles. The competing political views of religious conservatives and secular liberals go hand-in-hand with competing interests.

In our recent book, The Hidden Agenda of the Political Mind, we go through these kinds of patterns in detail. A major theme is that, despite all the recent talk of generic liberals and generic conservatives, in fact the public mostly contains individuals who mix-and-match liberal and conservative views on specific issues. We end up looking at a host of complex demographic combinations. We’ve posted an interactive political tool where you can check out some of these things for yourself.

When we look at a stereotypical Kansas group – white, heterosexual Christians with higher church attendance but less education and income – we of course see something else. They are typically conservative on discrimination issues and lifestyle issues, but moderately liberal on redistribution issues. Shift over to working class whites who are less religious, and positions on lifestyle issues become more moderate or liberal, though one still sees predominately conservative views in areas like race and immigration.

Most people have motley collections of political opinions, some of which are represented by one party and some by the other. Most people’s range of political opinions relate, on average, to their own interests – it’s just that people’s interests involve areas beyond redistribution. Lots of people have collections of views that ought to make preferring Democrats or Republicans a pretty close call, even if they cared about nothing other than their own interests.

As Democratic supporters ourselves, we of course would prefer for working class whites to vote Democratic. And we understand the attraction of viewing them as irrational when they don’t. But when we’re being social scientists, we must put politics aside.

So when you think about what’s the matter with Kansas, the answer might be nothing. Most working class whites are responding, like everyone else, to the fact that we have only two major parties, but a complex range of interests.