You Can Blame Juan Peron for Argentina’s Inflation

Mr. Singerman conducts fraud investigations in labor organizations and employee benefit plans. A longer version of this article was first published by Forbes. 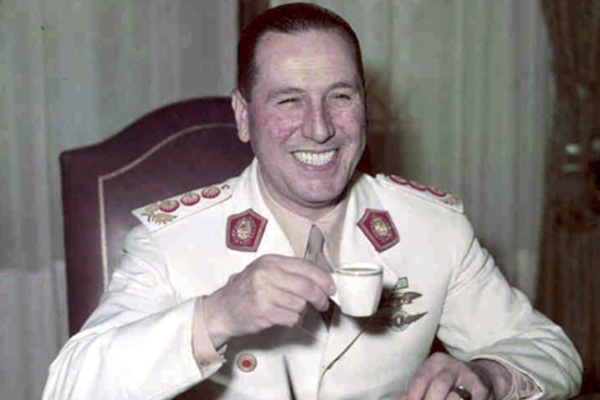 General Juan Perón was one of the most influential presidents of Argentina during the twentieth century. Of his three presidencies, Perón’s first (from 1946 to 1951) was the most relevant in terms of the fundamental changes to the Argentine economy and society that resulted from his governmental actions. Yet a significant portion of the funding of his economic reforms and social programs was concealed from the Argentine people. Today, almost 70 years from the first systematic inflationary policies implemented by Perón and after four changes in Argentina’s currency, inflation and concealment are still alive.

Between 1939 and 1941, Perón was a military attaché in Italy where he was exposed to Mussolini’s fascist corporatist ideas that later would strongly influence his presidencies. Perón’s military education made him extremely nationalist and anticommunist. He was very much concerned about how to avoid class warfare, the eventual rise of the dictatorship of the proletariat, and the disappearance of states that Marxist socialism had predicted would happen.

Perón viewed fascist corporatism as a useful method of social organization by which socially harmonious class participation would lead to a fair distribution of national output and elude in this way the class warfare predicted by Marxist socialism. In fact, Perón’s third position, which consisted of standing against international capitalism and international communism, was nothing less than fascist corporatism.

Although the fascist doctrine was never thoroughly implemented during Perón’s presidencies, the organization of the Argentine society into corporations with strong political power that only care about their own sectoral interest was one of Perón’s fundamental legacies; one that would constitute the root of inflationary pressures in Argentina to this day.

In 1946, Perón was democratically elected president of Argentina for the first time. Perón’s corporatist view of society was reflected in his own cabinet appointments. The Public Works Ministry and War Ministry went to the army. The head of the commercial workers union was assigned the Ministry of the Interior, while a labor union lawyer was appointed Minister of Foreign Affairs. Moreover, a glass union leader was appointed Secretary of Labor and Welfare, and a member of the Rural Argentine Society, a corporation that the defended the economic interests of ranchers and farmers, was designated Minister of Agriculture.

A cornerstone of fascism is economic nationalism. A nation cannot be truly independent until it secures national self-sufficiency, or autarky. To accomplish this, the fascist government creates and develops state-owned industries, which may coexist with private domestic firms. To foster and protect them both from foreign competition, the government usually restricts foreign imports that could compete with their output.

In early 1946, before Perón assumed his first presidency, General Farrel’s military government issued two decrees that nationalized the Central Bank of Argentina and bank deposits allowing the government to control the money supply and the allocation of credit. The nationalization of bank deposits meant that all deposits received by every bank in Argentina would be received on behalf of the central bank. In this way, banks would be unable to make loans on their own but would need to borrow funds from the central bank, which would determine the type of businesses that would receive financing. The same military government issued a subsequent decree by which an agency called the Argentine Institute for the Promotion of Trade (IAPI) was established with monopolistic powers to control Argentine exports and imports. These decrees were actually issued at the request of Perón himself because they would give him, once in power, the ability to control immediately fundamental aspects of Argentina’s economy while avoiding having to go through congress.

As pointed out by Dr. Robert Potash, the Five-Year Plan was very detailed in regard to public works that would be carried out but left unanswered questions regarding the total cost of the Plan and how it would be funded (Potash, Robert A “The Army & Politics in Argentina, 1945-1962: Perón to Frondizi. Stanford, 1980).

The Plan excluded the purchase of military equipment and was silent in regard to the acquisition of foreign-owned public service companies, which meant that the total cost of the Five-Year Plan was significantly understated. Likewise, the funding of the Five-Year Plan was unclear. The Plan did not disclose in detail how the costs of the various projects would be financed. In practice, Perón’s administration used the IAPI as one source of funding.

The IAPI was the exclusive purchasing and selling agent for grains and beef. Argentine Farmers had to sell their crops to this state agency, which in exchange paid the farmers a fixed domestic price. The IAPI would then try to sell the crops in the international markets at prices significantly above the domestic prices it had paid the farmers with the purpose of realizing huge profits.

But the resources generated by the IAPI proved to be inadequate to fund the cost of the Five-Year Plan, due to a decline in international agricultural prices, mismanagement, corruption, and unfulfilled economic assumptions about availability of British Pound Sterling reserves to offset trade deficits with the United States.

In the end not only did IAPI fail to provide adequate funds to support Perón’s Five-Year Plan, but its staggering operating deficits had to be financed through loans granted by state-owned banks and eventually by Argentina’s central bank.

By 1949, the first signs of a severe economic crisis appeared on the horizon with inflation peaking to 33.66% and an accumulated significant trade deficit with the United States that almost paralyzed imports needed by various industries.

Perón’s first presidency caused fundamental changes in Argentine society that have been responsible for the persistence of inflation to this day. His economic nationalism encouraged him to establish state-owned enterprises, which have been one of the main sources of government quasi-fiscal deficits (i.e., public sector deficits generated outside of the government’s budget). Since the beginning of Perón’s first presidency, state-run enterprises were overstaffed with political appointees who lacked the managerial skills and experience needed to make them profitable. Losses in state-owned enterprises coupled with huge government expenditures in public works, welfare programs, armaments, and purchases of public service foreign companies gave rise to government deficits that were funded by Argentina’s central bank through the emission of money.

In furtherance of economic nationalism, Perón also applied import substitution policies aimed at nurturing a self-sufficient industry in Argentina. These policies consisted of pure protectionist measures, such as stiff tariffs on imports of consumer goods that made these goods very expensive to compete with similar domestic products. Simultaneously, Perón’s government subsidized the same domestic industries through cheap loans, grants, and tax-favored treatment. The subsidies and the significant reduction in the importation of consumer goods caused by tariffs meant higher public expenditures and lower customs revenues, respectively, which contributed also to government deficits.

The fascist corporatist organization of Argentine society, a child of Perón’s own ideology, also facilitated inflationary pressures, as salary increases decreed by Perón’s government as well as collectively bargained between employer corporations and labor organizations without regard to increases in labor productivity immediately translated into higher prices. Moreover, Peron’s political survival was based on the support he could garner from labor corporations, the army, and certain industrialist organizations. In return, Perón would allocate a substantial part of his government’s budget to expenditures that would benefit principally workers and the military, while his government would protect and subsidize certain sectors of the private national industry. In this way, many corporations in Argentina since then have become economically dependent on the state and have rejected any curtailment in public outlays or government subsidies that could adversely affect them.

As a result of Perón’s economic policies, the spiral of inflation began to manifest itself. Whereas in 1946 the annual inflation rate was 18.74%, by the end of 1951 the change in the consumer price index reached 50.21%. The accumulated inflation rate in just six years was 297.57%.

But Perón could not have operated without a mechanism to fund his government and state-owned enterprises in the event taxes approved by congress and revenue generated by the latter were insufficient.

When the Central Bank of Argentina was created in 1935, certain commercial banks and the Argentine state owned this entity jointly. In order to avoid the funding of government deficits, the law at that time prohibited the central bank from advancing funds to the government in excess of 10% of its average tax collections during the past three years. The 1946 decree issued by the military government at the request of Perón nationalized the central bank making the Argentine state the sole owner of the bank. In addition, it eliminated the aforementioned restriction in advancing funds to the government. In this way, Perón was able to insure that any deficit run by his government would be funded by the central bank through the creation of money. This lack of independence of the central bank from the government has been a systemic problem in Argentina and the main reason that governments since Perón have been able to fund their deficits.

But why do government deficits funded by an increase in money supply cause inflation, and why is this an institutionalized fraud?

The 2015 Fraud Examiners Manual, US edition, by the Association of Certified Fraud Examiners, states that “fraud includes any intentional or deliberate act to deprive another of property or money by guile, deception, or other unfair means.” Accordingly, when a government intentionally and deceptively increases money supply with the objective of depriving persons in the private sector of the economy of goods and services that they have already earned, the government commits fraud. The deception occurs because the government makes believe that it is using its legal authority to create money to facilitate real transactions in the private sector of the economy and create wealth, when in fact it is taking away goods and services and consuming or redistributing wealth.

Criminologist Dr. Donald Cressey explained that individuals commit fraud when a combination of three factors exists: 1) financial pressure, 2) rationalization, and 3) opportunity. Not surprisingly, all three factors were present during the inflationary period that occurred after Perón reached the presidency for the first time.

First, Perón’s policies of import substitution, creation of state-owned companies, development of public infrastructure and the arms industry, and welfare programs for workers translated into government deficits. There were simply not enough resources that the private sector of the economy could transfer to Perón’s government via taxes and borrowings. The financial problems created by Perón’s own policies put pressure on his government to resort to the creation of money to get the additional resources that the private sector would not give him through taxation and loans.

Lastly, Perón had absolute control over the central bank and therefore the opportunity to create money to fund government deficits. In this way, Perón institutionalized fraud in Argentina as his government used the central bank, an institution created by law, to expand money supply, generate inflation, and thereby steal resources from the private sector of the economy.

Perón’s government was not the only administration in Argentina that resorted to inflation as a means of funding government deficits. Nevertheless, economic nationalism, the organization of the Argentine society into corporations with strong political power that are economically dependent on the state’s expenditures and subsidies, and a lack of an independent central bank are Perón’s legacies, which have fundamentally contributed to the embedment of inflation in Argentina since his first presidency.