Why Aren’t People Up in Arms About Capitalism these Days?

Steve Fraser is the co-founder of the American Empire Project, a writer, TomDispatch contributor, and an historian. He is the author of " Every Man a Speculator and Labor Will Rule,” and “Wall Street: America’s Dream Palace.” His latest book is “The Age of Acquiescence: The Life and Death of American Resistance to Organized Wealth and Power.” 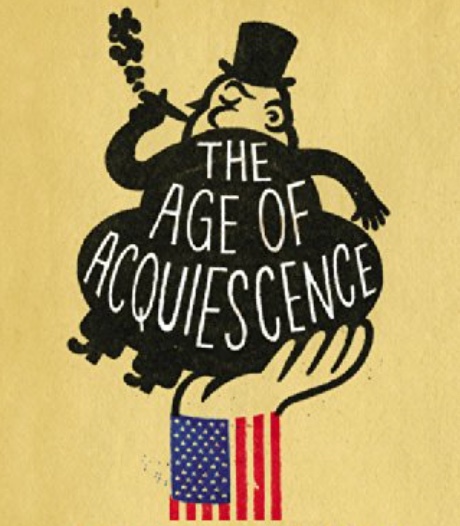 Karl Marx once described high finance as “the Vatican of capitalism,” its diktat to be obeyed without question. Several decades have come and gone during which we’ve learned not to mention Marx in polite company. Our vocabulary went through a kind of linguistic cleansing exiling suspect and nasty phrases like “class warfare” or “the reserve army of labor” or even something as apparently innocuous as “working class.” In times past, however, such language and the ideas they conjured up struck our forebears as useful, even sometimes as accurate depictions of reality. They used them regularly along with words and phrases like plutocracy, robber baron, and ruling class to identify the sources of economic exploitation and inequality that oppressed them, as well as to describe the political disenfranchisement they suffered and the subversion of democracy they experienced. 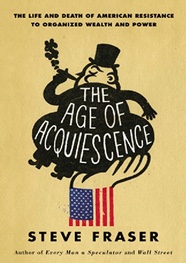 Occupy Wall Street, even bereft of strategy, program and specific demands as many lamented when it was a newborn, nonetheless opened up space again for our political imagination by confronting this elemental, determining feature of our society’s predicament. It rediscovered something that, beneath thickets of political verbiage about tax this and cut that, about end-of-the-world deficits and missionary-minded “job creators,” had been hiding in plain sight: namely, what our ancestors once called “the street of torments.” It achieved a giant leap backward, so to speak, summoning up a history of opposition that had mysteriously withered away.

We face a double mystery. Speaking generally, one might ask why people submit for so long to various forms of exploitation, oppression, and domination. And then, equally mysteriously, why they ever stop giving in. Why acquiesce? Why resist?

America’s history is mysterious in just this way. We have grown accustomed for some years now to referring to America’s two gilded ages. It has been natural to assume that these two gilded ages, however much they have differed in their particulars, were essentially the same. Clearly there is truth in that claim. However, I want to convince you that they were fundamentally dissimilar.

For people living during the last third of the 19th century, however much they were aware of and took pride in the country’s economic and technological marvels, the Gilded Age was also a time of profound social unease and chronic confrontations. Citizens were acutely conscious of and worried about how the nation seemed to be verging on cataclysmic divisions of wealth and power. The trauma of the Civil War, so recently concluded, was fresh in everyone’s mind. The abiding fear, spoken aloud again and again, was that a second civil war loomed. Bloody encounters on railroads, in coal mines and steel mills, in city streets and out on the Great Plains made this premonition palpable. This time the war to the death would be between the haves and have-nots, a war of class against class. American society was becoming dangerously, ominously unequal, fracturing into what many at the time called “two nations.”

Until Occupy Wall Street came along, all of this would have seemed utterly strange to those living through America’s second Gilded Age. But why? After all, years before the financial meltdown plenty of observers had noted how unequal American society had become. They compared the skewed distribution of income and wealth at the turn of the 21st century to the original Gilded Age and found it as stark or even starker than at any time in American history. Stories about penthouse heliopads, McMansions roomy enough to house a regiment, and private island getaways, kept whole magazines and TV shows buzzing. “Crony capitalism,” which Mark Twain had great fun skewering in his novel, was very much still alive and well in the age of Jack Abramoff. Substitute those Fifth Avenue castles, Newport beachfront behemoths and Boss Tweed’s infamous courthouse of a century ago and nothing much had changed.

Gone missing, however, were the insurrections and all those utopian longings for a world put together differently so as to escape the ravages of industrial capitalism. It was this social chemistry of apocalyptic doom mixed with visionary expectation which had lent the first Gilded Age its distinctive frisson.

If the first Gilded Age was full of sound and fury, the second seemed to take place in padded cell. Might that striking contrast originate in the fact that the capitalist society of the “gay nineties” was nothing like the capitalism of our own time? Or to put it another way: Did the utter strangeness of capitalism when it was first taking shape in America – beginning decades before the “gay nineties” – so deeply disturb traditional ways of life that for several generations it seemed intolerable to many of those violently uprooted by its on-rush? Did that shattering experience elicit responses, radical yet proportionate to the life or death threat to earlier, cherished ways of life and customary beliefs?

And on the contrary, did a society like our own, long ago grow accustomed to all the fundamentals of capitalism, not merely as a way of conducting economic affairs, but as a way of being in the world? Did we come to treat those fundamentals as part of the natural order of things, beyond real challenge, like the weather? What were the mechanisms at work in our own distinctive political economy, in the quotidian experiences of work and family life, in the interior of our imaginations that produced a sensibility of irony and even cynical disengagement rather than a morally charged universe of utopian yearnings and dystopian forebodings?

Gilded ages are, by definition, hiding something; what sparkles like gold is not. But what they’re hiding may differ, fundamentally. Industrial capitalism constituted the understructure of the first Gilded Age. The second rested on finance capitalism. Late 19th century American capitalism gave birth to the “trust” and other forms of corporate consolidation at the expense of smaller businesses. Late 20th century capitalism, notwithstanding its mania for mergers and acquisitions, is known for its “flexibility,” meaning its penchant for off-loading corporate functions onto a world of freelancers, contractors, sub-contractors, and numberless petty enterprises. The first Gilded Age, despite its glaring inequities, was accompanied by a gradual rise in the standard of living; the second by its gradual erosion.

During the first Gilded Age millions of farmers, handicraftsmen, shopkeepers, fishermen, and other small property-owners – not to mention millions of ex-slaves and dispossessed peasants from the steppes and parched fields of eastern and southern Europe – became the country’s original working class. They were swept up, often enough against their will or with little other choice, into the process of capital accumulation happening at the forges and foundries and engine-houses and packing plants and mills and mines and bridges and tunnels and wharves and the factories in the fields that were transforming the face of America. This reprocessing of human raw material into wage labor extended well beyond the “gay nineties” and was still going on when the whole economy fell to its knees in 1929. By the late 20th century, however, the descendants of these industrial pioneers were being expelled from that same industrial heartland as it underwent a reverse process of dis-accumulation and de-industrialization.

Profitability during the first Gilded Age rested first of all on transforming the resources of pre-industrial societies – their lands, minerals, animals, foodstuffs, fisheries, rivers, workshops, stores, tools, muscle and brain power – into marketable commodities produced by wage laborers who had lost or were losing their access to alternative means of staying alive. Profitability during the second Gilded Age relied instead on cannibalizing the industrial edifice erected during the first, and on exporting the results of that capital liquidation to the four corners of the earth – everywhere from Nicaragua to Bangladesh – where deep reservoirs of untapped labor, like newly discovered oil reserves, gave industrial capital accumulation a fresh start. Prosperity, once driven by cost-cutting mechanization and technological breakthroughs, came instead to rest uneasily on oceans of consumer and corporate debt. Poverty, during the first Gilded Age, originated in and indicted exploitation at work. Poverty in the second Gilded Age was more commonly associated in the public mind with exclusion from work.

We can once again, like our Gilded Age forebears, speak of “two nations,” geographically the same, separated by a century, one on the rise, a developing country, one in decay, becoming an underdeveloped country.

Stark contrasts in emotions, behavior, and moral sanctions grew up alongside these two divergent ways of making a living, amassing money, and organizing the economy. During the first Gilded Age the work ethic comprised the nuclear core of American cultural belief and practice. That era’s emphasis on capital accumulation presumed frugality, saving, and delayed gratification as well as disciplined, methodical labor. That ethos frowned on self-indulgence, was wary of debt, denounced wealth not transparently connected to useful, tangible outputs, and feared libidinal excess whether that took the form of gambling, sumptuary display, leisured indolence, or uninhibited sexuality.

How at odds that all is with the moral and psychic economy of our own second Gilded Age. An economy kept aloft by finance and mass consumption has for a long time rested on an ethos of immediate gratification, enjoyed a love affair with debt, speculation, and risk, erased the distinction between productive labor and pursuits once upon a time judged parasitic, and became endlessly inventive about ways to super-charge with libido even the homeliest of household wares.

Can these two diverging political economies – one resting on industry, the other on finance – and these two polarized sensibilities – one fearing God, the other living in an impromptu moment to moment – explain the Great Noise of the first Gilded Age and the Great Silence of the second?

And does the global explosion of Occupy Wall Street mark the end of the age of acquiescence? Is capitalism any longer compatible with democracy? During the first Gilded Age millions were convinced it was not. Is there then a future for democracy beyond capitalism? An old question is being asked anew.