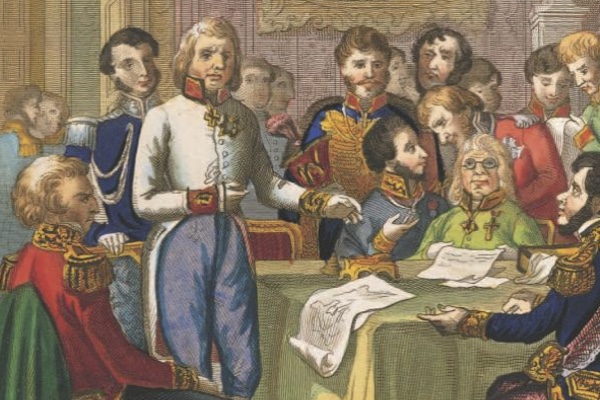 Two hundred years ago, European rulers were in the midst of what may well have been the most extravagant celebration in history—the “Congress of Vienna.” After more than two decades of war against Revolutionary and Napoleonic France, it was time for the victorious allied sovereigns, their ministers and generals to kick back and enjoy themselves.

The previous May, they had issued an open invitation to all interested parties to send representatives to Vienna, capital of the Austrian Empire, to participate in the reconstruction of Europe. Their intent was to secure the assent of the rest of Europe to their own decisions, but the plan backfired when they failed to reach agreement among themselves before the other guests to the party began arriving. 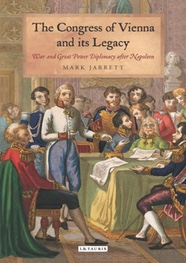 Hundreds of representatives and their entourages showed up, swelling the population of the walled city along the Danube by more than a third. The Austrian Emperor and his foreign minister, Prince Metternich, played the hosts, and despite the perilous state of imperial finances, they spared no expense in lavishness. The Russian Tsar and the Kings of Prussia, Denmark, Bavaria and Wurttemberg all resided as special guests in the Hofburg Palace in the heart of Vienna. 170 new imperial carriages were built just for the occasion, while thousands of sumptuous new uniforms were manufactured to clothe an expanded imperial staff. Every night, hundreds of guests ate at the Emperor’s expense.  There were nightly dinners and soirées, frequent masked balls, and a series of spectacular special events, such as a costumed medieval joust in the Spanish Riding School and a giant sleigh ride to the Palace of Schönbrunn on the outskirts of the city. These festivities didn’t continue just for days—they went on for months and months.

Beneath all the frivolity, the Congress statesmen left a legacy of solid accomplishments, many of which still influence us today:

1. The Congress of Vienna promoted principles of peace.

First and foremost, the Congress statesmen desired a territorial settlement that would preserve the peace. Since they saw the greatest threat to Europe as coming from France, they surrounded her with a series of buffer states: Belgium was united with the Netherlands to the northeast; the Italian state of Piedmont was given control of Genoa to the south; and Prussia was awarded the Rhineland to the west. All the states of Europe were invited to sign the Vienna “Final Act,” making it the cornerstone of public law in Europe. No war between any of the great powers occurred for the next 40 years, until the Crimean War, and no major war on the scale of the Napoleonic Wars took place until the outbreak of World War I a century later.

2. The Congress participants provided an example of compromise rather than war.

To achieve this spectacular success, the diplomats at Vienna chose the path of negotiation over confrontation. It was the first time that heads of state and their chief ministers had personally attended such a peace conference, and they set the tone by reaching a series of astute compromises rather than coming to blows, even over the issues where they most disagreed, such as the reconstruction of Central Europe.

3. The Congress settlement helped Europeans to enjoy their greatest economic progress in history.

After centuries of almost continuous warfare, Europeans at last enjoyed an extended period of peace. This coincided with the Industrial Revolution and its momentous strides in manufacturing, transportation and communications. Stability on the continent of Europe also meant that European states—for better or for worse—exported their rivalries overseas and created new colonial empires in Africa and Asia.

4. Almost no part of Europe was left untouched.

All across Europe, the Congress statesmen negotiated agreements and drew lines that continue to affect European borders today. They gave Salzburg to Austria, added Geneva to Switzerland, and Genoa to Piedmont. They inserted the new Swiss Constitution into the Vienna Final Act, and guaranteed the Swiss Confederation’s future neutrality. They secured the rebirth of an independent Netherlands, which Napoleon had incorporated into France. During the Congress of Vienna, the Prince of Orange announced he was assuming royal powers. It was during the Congress of Vienna, too, that Norwegians declared their independence. They objected to allied plans to end their dynastic union with Denmark and unite them with Sweden. In the end, Norwegians were forced to submit, but the constitution they drafted in 1814 remains the framework for their government to this day.

5. The Congress established the principle of the free navigation of European rivers.

The allied powers established the principle of freedom of navigation on major European waterways, and established the Central Commission for the Navigation of the Rhine, arguably the oldest working international commission still in existence.

6. The Congress set an example of liberal humanitarianism by working towards religious toleration and abolition of the slave trade.

The Congress statesmen opposed religious intolerance and included specific measures in the Vienna Final Act to protect the rights of German Jews.  They also held lengthy discussions on ending the slave trade. A general declaration against the slave trade was issued and the groundwork for its future abolition was laid.

The question of diplomatic precedence had been a source of much bickering in the past. A special committee was formed at the Vienna Congress to resolve these problems once and for all, and it did so by devising commonly accepted rules still in use 200 years later.

8. The Congress had a profound cultural impact, from the foods we eat to the music we enjoy.

Ludwig van Beethoven conducted a performance of his Seventh Symphony at the Congress, as well as a new cantata he composed especially for the occasion. The waltz, a dance of whirling couples that required far greater touching by partners, was already fashionable in Vienna and became an international sensation during the Congress. The delegates at Vienna also vied with one another to serve the best cuisine. Talleyrand brought his best chef to entice his visitors with rich sauces and scrumptious deserts. Wiener Kongresstorte, a cake filled with walnut cream, is still served in Viennese cafés.

9. Without the Congress of Vienna, there would have been no Waterloo.

This June, the world will be celebrating the 200th anniversary of Waterloo, but this battle might never have taken place had it not been for the Congress of Vienna. Napoleon escaped from Elba and landed in France in March 1815, while allied leaders were still assembled in Vienna. As soon as they heard the startling news, they met and instantly resolved to band together to unseat their former adversary.

10. The Congress of Vienna led to the later “Congress System,” which in turn influenced the formation of the League of Nations and United Nations.

Last but not least, the Congress of Vienna suggested a new model of global governance.  After the return of Napoleon and the Battle of Waterloo, the same ministers who had summoned the Congress of Vienna gathered in Paris to negotiate a new peace treaty with France. They also signed a separate alliance between themselves in which they pledged to hold periodic unions, known to historians as the “Congress System.”  The simple idea was for the great powers to meet to discuss outstanding issues, to reach a consensus, and then to impose their collective will on the rest of Europe. The system did not last long because Britain, as a constitutional monarchy, could not agree with the more absolutist states on the systematic repression of all revolutions as a matter of principle.

A century later, when British policy-makers were designing the organizational structure of the new League of Nations, they looked back on this audacious experiment in international cooperation and specifically called for periodical meetings of the great powers. These became the “Council” of the new League and held most of its power—a partial resurrection of the Congress System of old.  When the League of Nations was replaced by the United Nations in 1945, its Council was renamed as the Security Council. Thus, the five permanent members of the U.N. Security Council today are the very real heirs of the Congress System—that group of great powers that summoned all of Europe to Vienna 200 years ago. This is, no doubt, their greatest legacy of all.