The American Internment Camp You Never Heard of

Jan Jarboe Russell, the author of “The Train to Crystal City: FDR's Secret Prisoner Exchange Program and America's Only Family Internment Camp During World War II,” is a former Nieman Fellow, a contributing editor for Texas Monthly, and has written for the San Antonio Express-News, the New York Times, Slate, and other magazines. She is the author of “Lady Bird: A Biography of Mrs. Johnson” and has also compiled and edited “They Lived to Tell the Tale.” She lives in San Antonio, Texas, with her husband, Dr. Lewis F. Russell, Jr. For more information please visit her website, and follow the author on Facebook and Twitter.

The general history of America's internment of its own citizens during World War II has long been focused on the incarceration of 120,000 Japanese, 62 percent of them American-born, who were forcibly evacuated from the Pacific coast after the bombings during World War II. 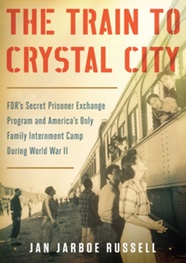 But what I learned during my five years of research for the book, The Train To Crystal City, is that that Executive Order 9066, which ordered the internment of Japanese, also allowed the Roosevelt administration to intern German and Italian immigrants and their American-born children.

About 6,000 Japanese, German, and Italians and their children were housed in a secret internment camp in Crystal City, Texas, a small desert town at the southern tip of Texas, about 35 miles from the Mexican border.

The history of the camp in Crystal City exposes a corner of American history that few knew existed. The camp opened in 1942 with the official purpose to reunite immigrant fathers who'd been arrested by the FBI as "enemy aliens" with their wives and children. It became the only interment camp in the U.S. that held entire families and multiple nationalities.

Earl Harrison, Roosevelt's new commissioner of the Immigration and Naturalization Service, visited the small town of Crystal City, Texas on November 6, 1942, arriving by train from his home in Philadelphia. He walked around a 240-acre site that was previously used as a migrant worker camp for Mexican laborers. From Harrison's point of view, the isolated location of the camp, far from areas considered vital to the war effort, was positive. It was as close to Siberia as we had in America – which made it an unlikely target for sabotage and protected its secrecy.

Week after week, month after month, from 1942 to 1948, trains with window shards pulled shut, carried civilians from all over the world across miles of flat, empty plains to the small desert town at the southern tip of Texas. Roosevelt not only arrested German, Japanese and Italians on American soil, but orchestrated the removal of 4,058 Germans, 2,264 Japanese and 288 Italians from thirteen Latin American countries – and locked many of them up in Crystal City.

A little known fact, documented by the historian Max Paul Friedman in his book, Nazis and Good Neighbors, is that 81 of those taken from Latin America were Jews who had fled persecution in Nazi Germany. One Jewish family – the Jacobis from Columbia – was interned in Crystal City.

But Crystal City had other secrets. It was the center of Roosevelt's prisoner exchange program. On September 1, 1939, the day before Germany invaded Poland, Roosevelt created a division within the Department of State – the Special War Problems Division – to create a pool of Japanese and German "enemy aliens" – to be used as hostages in exchange when the U.S. inevitably joined the war.

Over the course of the war, thousands of prisoners in Crystal City, including their American-born children, were exchanged for ostensibly more important Americans – diplomats, businessmen, soldiers, physicians, and missionaries – behind enemy lines in Japan and Germany. The first of four exchanges in Crystal City took place in June 1942 and the second on September 2, 1943. During those exchanges, more than 2,000 Japanese and Japanese Americans were traded for Americans caught in Japan. In February 1944, 634 German immigrants and their children, were sent from Crystal City into Germany. On January 2, 1945, 428 more in Crystal City were traded into war.

Daily life in Crystal City was highly regimented. Every morning the American flag was raised in ceremony. As the camp awakened, sleepy night guards relinquished their posts to daytime guards. Censors, who were fluent in German and Japanese, read the incoming mail of internees and cut out portions that related in any way to the war effort. Internees were allowed to write only two letters and one postcard per week. These, too, were censored. Comic books were confiscated for fear that they contained coded messages. Officials kept a dossier on each internee. A small police force patrolled the camp. At the front gate, vehicles of visitors were searched, both upon entry and exit.

The roll calls seemed endless. Three times a day, a whistle blew in the camp, and everyone had to run back to their cottages and huts, form lines, show their faces and stand still for the count. In the presence of armed guards, absences were noted. Prisoners met visitors – friends or relatives – in a hut under the watchful eyes of surveillance officers. As for escape, everyone knew the penalty was death. In fact, for the duration of the camp's history no one dared risk it.

Despite the harsh conditions, the children in the camp, most of them born in America, were humanely treated. The camp had three schools: the American school, where the teachers were certified by the Texas board of education, the Japanese school, taught by Japanese fathers and mothers, and the German school, taught by Germans. American-born teenagers were often in conflict with their foreign-born parents over issues of loyalty.

One anecdote tells the story. Shortly after the camp was opened, Earl Harrison – the head of the INS – visited the camp. During a tour given by Joseph O'Rourke, the officer in charge, Harrison and O'Rourke encountered a group of children. O'Rourke asked what they were doing. "Playing war," a young boy said.

"Okay," said O'Rourke. "But I hope nobody gets killed." He and Harrison continued their tour.

On the way back, the two men stopped at the same spot and found the children seated on the ground, looking glum.

"What happened to the war?" O'Rourke asked.

The fundamental questions of citizenship – the status of aliens, indeed the definition of who is and who is not an American – are perennial. The travesty in Crystal City was that given the high stakes during World War II and the anti-immigrant sentiment at the time, the cost to civil liberties was high.