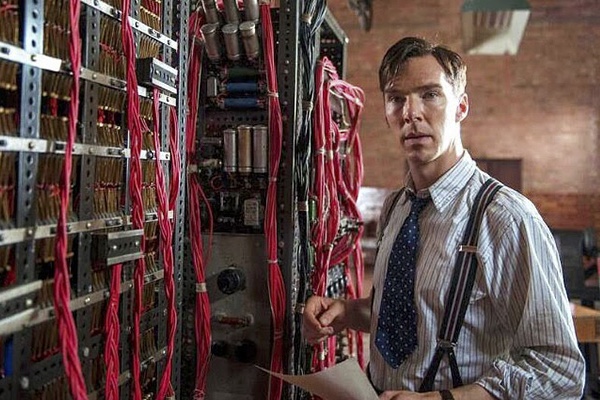 In 1939, Great Britain gathered some of its top mathematicians, an odd assortment of cross word puzzle fanatics and problem solvers and charged them with cracking the infamous Enigma Code, the secret military code used by the Nazis, who had just invaded Poland to start World War II. The odds of doing it, one of the math intellectuals told the army commanders, was about 159 million to one.

One of those math wizards was a tall, thin, rude, abrasive, socially inept man from Cambridge University named Alan Turing. He was the driving force of the secret group that lived at Bletchley Park, a former radio factory outside of London, in secrecy. Turing was an enigma himself, an odd social duck whom colleagues at first found very difficult to befriend.

The Imitation Game is Turing’s story. It is a powerful, dramatic tale of covert operations, tangled romances and a country in the middle of a horrific war. It is a bruising, scintillating drama, a tour de force in filmmaking and, added on to all of that, a marvelous piece of history story telling.

The Imitation Game is two stories in one. The bigger story is the drama behind the cracking of the enigma code that takes several years. The other story is Turing’s secret homosexuality, highly illegal in England at the time, figured out by most of his colleagues early on, and by his girlfriend. He survives the war with his sexual secret, but not the peace. The mathematician could outsmart the Germans, but not the local constables and was caught in 1951. What England did to the homosexual genius makes up the sad end of the movie.

The power of the film is the ever urgent need to crack the Nazi code amid the nearly non-stop bombing of London and other areas of England by the German Luftwaffe and, later, V-2 rockets. There are numerous scenes of the bombing, and the use of the subway tunnels for defense (my father was stationed in London for three years – radar – and hid in those tunnels himself on countless occasions). There are also numerous black and white newsreel scenes of the war and the celebration of outdoor crowds surrounding Winston Churchill at the end of it. That sense of emergency saturates the movie while, at the same time, everybody becomes angrier and angrier with Turing’s slow and ponderous work in failing to crack the code, but spending months building a large machine to use to crack it all of the time and in all future conflicts. Another of his machines, called the “Turing Machine” in the early 1950s, was the primitive framework for the modern day computer.

The movie takes some liberties with history, as all films do. The small group of people that cracked the code was actually much larger. More army officers were involved in the administration at Bletchley than were seen, too. In fact, Bletchley Park was a much larger codebreaker operation than described in the movie. Joan Clarke, who became engaged to Turing, was the only woman in his “hut,” or unit, but there were other female codebreakers working at Bletchley.

The movie is based on a biography of Turing, Andrew Hodges’ Alan Turing: The Enigma and like most historical films adds some fictional character and tweaks the backgrounds of others. Turing in real life was not as cold and aloof as he is on screen. He is also not the man who single-handedly cracked the code, but the leader of a group that, collectively, accomplished that task. They built on earlier work by Polish cryptanalysts.

Turing’s real personality is also altered a bit in the movie. In real life, he was far more overtly homosexual than depicted in the movie and had numerous romantic setbacks, which may have caused his aloofness. Turing was in love with a classmate as a prep school student and the boy did die, as depicted in the movie. Turing did speak German, even though he denies that in the film, and Alastair Denniston was his boss in the war, although the real Denniston was not as hard on Turing and the others ad the movie implies.

In real life the mathematical whiz was far more eccentric than portrayed in the film. He had allergies and often wore gas masks to work to protect him from pollen in the air. He w also an accomplished runner and sometimes ran the forty miles to London from his Bletchley Park radio factory.

Numerous military experts and scholars all agree that the breaking of the code by Turing, Clarke and the others cut two years off the war and probably saved the lives of some 14 million people.

Director Morten Tyldum has done a fine job of bringing one of the most secret, and important chapters of World War II to the screen (there have been other films and documentaries, too). He has done superb work in making a dramatic story out of the hunt for the Enigma code and, at the same time, making Turing a very believable and likeable person, despite his rough around the edges personality. The director did well, too, in moving his story back and forth between Turing’s prep school days, World War II life and the post war era.

The director gets a very impressive performance from Benedict Cumberbatch as Turing. Cumberbatch, fabled in England for his Sherlock Holmes portrayals, has created a very fragile and tender Turing who constantly grapples with his relationships with men and women and his soaring brilliance. His love object in the film, Joan Clarke, is the glamourous Keira Knightley. In effective work, Knightley turns Clarke into a hard working, patriotic woman with a green thumb for crossword puzzles who loves Turing and struggles with his homosexuality. They work with a solid ensemble cast.

The ending of the film is the most stunning part. Here we have Turing, as important a war hero as any Admiral or General, arrested just because he violated Britain’s archaic and laws against homosexuality. In that era, surprisingly enough, those convicted of “gross indecency” had a choice of time in prison or taking drugs that were referred to as “hormonal castration” to kill sexual appetite. The drugs also caused severe problems with the body in general, both physical and mental. After several years on the drugs, Turing killed himself at age 41.

He was killed, in a sense, by the strait laced sexual attitude of the very culture whose existence on the earth he helped to save.