James Graham Wilson works in the Office of the Historian at the Department of State. He is the author of “The Triumph of Improvisation: Gorbachev’s Adaptability, Reagan’s Engagement, and the End of the Cold War“ (Cornell University Press, 2014). The views expressed herein are those of the author and do not necessarily reflect those of the Department of State or the U.S. Government. 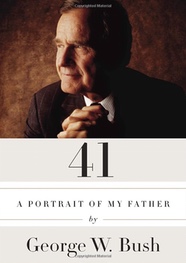 In November 2014, George Walker Bush, forty-third president of the United States (hereafter “43”), published a book about the forty-first president, George Herbert Walker Bush (hereafter “41”). He is the second former president to have written a book about another (Herbert Hoover’s book on Woodrow Wilson). Few associates of either man -- father and son -- seemed to have had any inkling of this project until 43 announced in July that its release would coincide with the 25th anniversary of the fall of the Berlin Wall. 41: A Portrait of My Father includes as frontispiece a photograph of an oil portrait the author has painted of his subject. The author narrates an audio version of the book as well. He has produced a compelling account of the life of a thoroughly decent man.

The first two-thirds of the book cover the period leading up to 41’s inauguration in January 1989. The reader learns of such things as the high standards of waltzing in Greenwich, Connecticut, where 41 first met Barbara Pierce at a country club dance in December 1941. And that, upon setting out to West Texas after World War II, young 43 in tow, the family once shared a house with a “mother-daughter pair who made their living by entertaining male clients throughout the night.” There is additional folksiness and a tale about an office party where 41 placing a rubber onion in a colleague’s martini.

There are also wrenching accounts of the two defining experiences in the lives of the author’s parents: 41’s surviving the 1944 downing of his Grumman TBM Avenger, when his two crewmembers did not; and the loss of three-year-old Paula Robinson “Robin” Bush, who succumbed to leukemia in 1953. Whether or not journalists covering 41 over the course his political career comprehended the magnitude of these devastating moments, they focused more on his privileged background than his humanity. 43 recalls an arresting moment in the 1980 presidential campaign when a reporter asked if 41 had ever experienced “personal difficulties.” The latter responded: “Have you ever sat and watched your child die? I did, for six months.”

I am not sure what any reporter not made of stone could have said next. I have also never understood what sequence of events led Newsweek editors to call its 1987 profile of him: “Bush Battles the ‘Wimp Factor.’ ” Emerge victorious he did, however, defeating Michael Dukakis in a scorched-earth political campaign. Ninety years of age, in the twilight of life, he is America’s greatest living president.

Readers familiar with the extant literature hoping for new insight into policymaking will have to wait for Jeffrey Engel’s When the World Seemed New and Jon Meacham’s forthcoming biography. For there is nothing terribly fresh here when it comes to 41’s presidential years. The father Bush, as we knew at the time but appreciated less than we do today, was a prudent statesman and consummate realist. He imposed sanctions on China in June 1989, in the wake of Tiananmen Square, but also corresponded with his “dear friend,” Deng Xiaoping, and quietly sent National Security Advisor Brent Scowcroft and Deputy Secretary of State Lawrence Eagleburger to Beijing. When 41 visited Hungary and Poland later that year, he avoided soaring rhetoric that might have provoked hardliners on either side. He did not dance on the Berlin Wall in November 1989. And he sustained a close personal relationship with Gorbachev while driving hard bargains on arms reductions and the future of Europe.

43 does not cover many domestic policies in this book. Nearly everyone today regards the Americans with Disabilities Act as a tremendous achievement for human dignity. The people upset by it at the time were even more offended by 41’s breaking of his pledge: “read my lips: no new taxes.” “The deficit reduction deal obscured many other accomplishments of Dad’s presidency,” 43 writes. A simpler explanation would be that 41’s critics were wrong. The 1990 budget deal did not impede U.S. economic recovery, which began in the spring of 1992 and helped guide the federal deficit downward -- past zero, even -- until 2001.

I was fortunate to be in the audience at the George H.W. Bush Presidential Library in College Station on November 11, when 43 unveiled his book in conversation with his former chief of staff, Andrew Card. With his parents sitting in the front row of the audience, the author leaned back in his chair, crossed one leg over the other, and proceeded to speak with warmth and hilarity. He said that he wrote the book at the suggestion of his friend Dorie McCullough Lawson, daughter of historian David McCullough, after she conveyed her father’s lament that John Quincy Adams had never written a serious account of his own father, the nation’s second president. “Dorie’s idea planted a seed,” 43 writes in the preface. “Eventually, it sprouted into this book.”

43 has appeared less relaxed in subsequent appearances. In a recent interview with CNN, he dismissed an otherwise favorable review in the New York Times, apparently because Peter Baker wrote that 43 does not “reflect on his lifetime of effort to prove himself by following in his father’s footsteps . . . [or] dwell on any frustrations in trying to measure up.” This observation, to 43, is “typical psychobabble of somebody who has no clue what he’s talking about.” If painting portraits has led him to appreciate introspection, he does not always let on.

Two episodes in the book could use more of it. The first is when 43 tells the story of his mother weeping, in 1974, upon receiving the message that President Gerald Ford was asking her husband to leave Beijing to become Director of Central of Intelligence. Ford “had just asked the man she loved to reenter the swamp,” 43 writes. I suspect the actual reason was that Barbara Bush figured the news meant 41 would never get to be president. How did 43 react when his parents informed him of their dejection? Coming at a difficult period in his own life, would he have shared in their sentiment -- or, would the “tragedy” of 41’s becoming only the fifth or sixth-most-powerful man in the country merely have added to his own?

A second moment is 43’s description of a phone conversation with his dad the night of the November 1994 midterms, after he had triumphed in the Texas gubernatorial election. Because Jeb was headed to defeat in Florida, 41 said it was no time to celebrate -- even though 43 had just defeated the woman who, at the 1988 Democratic Convention, said that 41 had been born “with a silver foot in his mouth.” Was 43 hurt by this tepid response? I would have been.

The reader may be surprised to learn just how involved 43 was in both the 1988 and 1992 presidential campaigns. The attention he devotes to them suggests that he agonized more over the early stumbles in the former and the humiliation in the latter than did those in even his father’s inner circle. 43 all but acknowledges that, around Thanksgiving 1991, he was the one who persuaded 41’s Chief of Staff John Sununu to resign, in anticipation of the following year’s presidential election. He drew from this episode a “lesson”: “to either make personnel changes myself or to have a close confidant (not a family member) who could speak on my behalf make them.” I am not entirely sure how the example he provides -- asking Vice President Dick Cheney to fire his own longtime mentor, Secretary of Defense Donald Rumsfeld, after the 2006 midterm elections -- upholds this principle. At least, not when the president could have accepted Rumsfeld’s resignation in person on several previous occasions.

Ultimately, there is a level of competitiveness on the part of the Bushes (as there clearly was with the Kennedys) that qualifies as “above average.” Psychobabble it may be, but I think this is a key reason 43 and 41 now regard Bill and Hillary Clinton as part of their family. Upon reading this book, I am also of the mind that 43 wrote it, in part, to challenge his younger brother Jeb to run for president in 2016. There will be plenty about that relationship for qualified psychologists to explore. In the meantime, there is more for historians to write about when it comes to the relationship between George H.W. Bush and George W. Bush and its role in decision such as the one to invade Iraq in 2003. As he did in Decision Points, a memoir of his presidency, 43 recalls the note his father wrote him on March 19, 2003 restating the words of his sister, Robin, who did not live to be four: “I love you more than tongue can tell.” That note was the expression of a father’s love. The expression of a father’s wisdom was Brent Scowcroft’s op-ed in the Wall Street Journal in the summer of 2002: “Don’t Attack Saddam.”