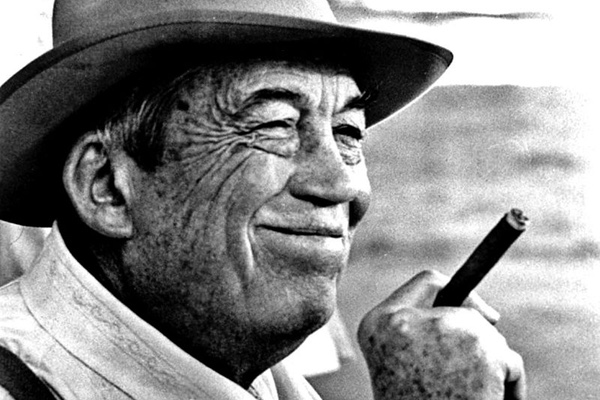 In director John Huston’s The Treasure of Sierra Madre, an old man laughs uproariously at the start of a gold prospecting adventure designed to make millions and, at the end of it, he laughs again when he learns that he and his partner have lost everything. That was a good metaphor for the life and films of the legendary Huston, a hard-edged man with a craggy face who enthralled America with 50 years of movies, all kinds of movies.

He directed adventure films, such as The Treasure of Sierra Madre, The Red Badge of Courage, The African Queen and The Man Who Would Be King. He made some of filmdom’s great detective thrillers, such as The Maltese Falcon and directed Clark Gable in his last film, The Misfits.

He appeared in a number of his movies and the films of others (57 roles as an actor), always recognizable with that distinct, gravelly voice, and played one of history’s most demented villains, Noah Cross, in Chinatown.

His life was as turbulent as his films. Huston was brought up by divorced parents who took him to the race track and vaudeville shows. He never went to a film school, but learned the ropes on his own and brilliantly (15 Oscar nominations and two wins as Director and Screenwriter for The Treasure of Sierra Madre).He spent much of his youth as a tough amateur boxer and later became a cavalry rider. The director was married five times, had four children (actress Anjelica being the most famous), traveled the world, lived in numerous places and loved the movies. Oh, how he did love the movies.

Huston, who was known as a rebel director, is back again in a lengthy film series in his honor in New York, where the Film Society of Lincoln Center opens “Let There Be Light: The Films of John Huston” on Friday. The first film is, appropriately, Key Largo. Then, over the course of two weeks, film lovers can catch The Dead, Asphalt Jungle, Fat City, and Moulin Rouge. The Unforgiven, The Maltese Falcon, The Treasure of Sierra Madre, The Red Badge of Courage, The African Queen, The Man Who Would Be King, The Misfits and others. His daughter Anjelica will attend the last movie in the festival and greet her father’s fans.

Dennis Lim, director of programming for the film society, said in a statement that “John Huston was a titan of Hollywood’s Golden Age but he outlived it. His storied career spanned multiple decades, styles and genres. And he was also the rare artist who grew more daring with age. This retrospective allows for a full appreciation of his prodigious gifts and ambitions. There are many films here that are now popular favorites but many more that are overdue for rediscovery.”

The holidays are the perfect time for a Huston film festival because so many of his movies were gifts to America. He made 41 films, in color and black and white. Some of the biggest names in Hollywood starred in his films, such as Humphrey Bogart, Jack Nicholson, Michael Caine, Katherine Hepburn, Marilyn Monroe, Clark Gable and Sean Connery. Many of his movies made a lot of money and garnered numerous awards. He also directed the movies in which his father Walter and daughter Anjelica won their Oscars.

His films all had different themes. Many of his films did not have happy endings. In some, the protagonists did not find the pot of gold, in gold or emotions, for which they were searching. In many of his stories people who were doomed squabbled with their fate and each other to create memorable conflict. Many had multiple themes tied into a larger theme, such as The Treasure of Sierra Madre, where three greedy men go off into the mountains and two of them find hope and friendship worth more than the gold they dug up in the hot sun.

The maverick director never believed in a close, hands-on approach in filming, but let his stars carry their films. The stars drifted to him because he gave them autonomy and had a rare gift for matching up actors with roles, many in roles that made them famous. People also enjoyed the fact that he always liked to film on location. If a movie was set in Mexico, it was filmed in Mexico. If it was west in Africa, everybody sailed off to Africa and lived in a village that Huston had his people carve out of a thick jungle. He also had an uncanny knack for finding unique local villagers and casting them in small roles in films.

He never thought there was such a thing as a “Huston movie” or that he had a style. He told friends that he just made movies and that each was unique. Therefore, they were all different.

Many critics overlooked the great contributions the fabled director made to history, though. In film after film, he underscored history or, in contemporary films for him, gave later generations of Americans a fine look at the 1940s, 50s and 60s as through the lenses of his cameras. The history theme appears over and over again in his movies.

Huston wrote or directed several movies about the history of crime and the mob, including Asphalt Jungle and Prizzi’s Honor. Perhaps his most famous film was his first, about legendary 1930s detective Sam Spade, The Maltese Falcon. He directed a handful of films about the Old West, such as The Life and Times of Judge Roy Bean. He wrote or directed several World War II films, such as Heaven Knows Mr. Allison, and Across the Pacific, plus The African Queen about World War I (he also made several documentaries for the army when he was in the service during World War II). Huston piloted some films about Parisian history (Moulin Rouge). boxing history (Fat City) and whaling history (Moby Dick). He reached way back in time to direct The Bible: In the Beginning. He directed some of history’s most glamourous people, show business historical superstars, such the turbulent pair from The Night of the Iguana, Richard Burton and Elizabeth Taylor. He gave America a wonderful look at the past through these films.

The actors who worked with him liked him. “He was daring, unpredictable, maddening, mystifying and probably the most charming man on earth,” said the late Lauren Bacall.

His desire to do films about history gave him many different subjects and eras to explore and that made him, some critics said, an inconsistent director. That was good, though, because his films were all different, and appealed to a much wider audience than those who stuck to just thrillers or just romances or just politics.

. “I don’t seek to interpret reality by placing my stamp on it. I never try to duplicate myself. One must avoid personal clichés,” he once said.

Critics adored him. In 1985, New York Times critic Vincent Canby praised Huston for “the amazing endurance of his first-rate cinematic intelligence, the variety of his films and the consistency with which he has recouped his fortunes with a good film after turning out some bad ones…it may now be time to call him a master.”

He was an eccentric and had a short temper. In 1952, complaining that all of America had fallen into moral decay he fled the country and moved to Ireland, where he lived for more than twenty years before returning.

Life was chance to Huston, and so was history. Nothing turned out the way it did because it was supposed to do so.

Several years ago, while on vacation near Puerto Vallarta, Mexico, by sheer chance I visited Huston’s estate at Las Caletas on the shores of the Pacific, now a vacation destination. It was the quiet paradise that he loved. For us tourists, there was snorkeling, swimming, lunch, hundreds of palm trees swaying slightly in the late afternoon breeze and a few cold beers. In the middle of the estate was the small, plain house that was his home. It had been turned into a museum highlighted by photos from his films. The pictures were a reminder that the Pacific in all of its majesty was not as majestic as his films.

For film dates and times: filmlinc.com.