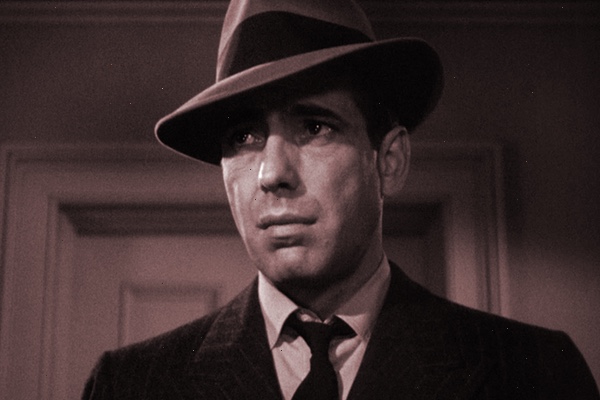 There is trouble in the world today? Serial killers? Arsonists? The thugs of ISIS? Don’t bother with the CIA, FBI, Interpol or the NYPD. Get Sam Spade!

Spade was one of the famous tough guy detectives in literature and film, created by Dashiell Hammett back in the Great Depression era. He was tougher than tough; he ate nails for breakfast. He and the other great film noir sleuths comprised a genre of books and movies that have thrilled Americans since the 1930s. Now the heroic private investigators are back in Chandler, Hammett, Woolrich & Cain, a film series at the Film Forum in New York, December 12 – 24. They arrived there directly from any television network you can think of, where they have solved crimes and beat up criminals for decades.

The Film Forum festival will open Friday with Humphrey Bogart and Lauren Bacall in The Big Sleep. The festival will show two versions, the pre-release cut and the regular feature. Other films, shown singly or on double bills, will be Double Indemnity, The Postman Always Rings Twice, Obssessione, Phantom Lady, Black Angel, The Window, Deadline at Dawn, City Streets, Streets of Chance, The Maltese Falcon, The Glass Key, Rear Window, Strangers on a Train, Mildred Pierce, Murder My Sweet, The Long Goodbye, The Bride Wore Black, The Thin Man and After the Thin Man.

The film noir detective is a distinctly American invention. He is not the elementary, deductive and brainy Sherlock Holmes, the clumsy Parisian inspector Jacques Clouseau of The Pink Panther, later Jessica Fletcher of Murder, She Wrote. The American tough guy investigator is one of a kind. When they made him they not only threw away the mold, but shot it six times.

These detectives, such as Spade, Philip Marlowe and Mike Hammer, grew up in the pulp fiction magazines of the ‘20s and ‘30s and the paper back novels of the 1950s. They became internationally famous in the black and white film noir movies of the 1940s. If you had a dark alley and a damsel in distress, Hollywood had a tough guy detective for you.

They were joined by a battalion of other film noir sleuths such as Nick and Nora Charles, of Thin Man fame. John Shaft and Dirty Harry, guns blazing, came later.

The tough guy detectives appear as complicated characters on screen, but the secret to their appeal was simplicity. “(The detective story) had one golden rule which unsung editors insisted upon and good and bad writers alike religiously followed: deference to the art of storytelling. Every story in the pulps had a beginning and an end, sharply etched economical characterization, action, emotion, plenty going on. The mission was to keep the reader hooked,” wrote Maxim J Jakubowski in his introduction to the Mammoth Book of Pulp Fiction.

The villains of the 1930s, ‘40s and ‘50s detective stories and movies were as sharply drawn and powerful as the detectives. These characters, good guys and bad guys, attracted the best actors in Hollywood, stars like Edward G. Robinson, Humphrey Bogart, Richard Widmark, James Stewart, William Powell, Myrna Loy and others, to film noir movies.

The detective magazines, and tough guy movie scripts, also attracted the nation’s best writers, too. In her introduction to Fifty Best Mysteries, Eleanor Sullivan wrote that “ (Ellery Queen Magazine)…has given the detective story a respectable place in serious writing. Queen’s magazine often carries mystery stories by well-known authors of current and past and has made it seem as if every writer of note in history produced at least one such story.”

Unlike the police shows of today, where an ensemble works together to solve a crime, the 1940s gumshoes who walked down the “mean streets” worked alone and for their own goals. “The hero, a lone knight, seeks not to redeem this fallen society, but to maintain his personal integrity in the face of repeated temptations and deceptions,” wrote Charles Rzepka in Detective Fiction.

They sought “the promise of individual achievement, all set against a general backdrop of lawlessness,” said Cynthia Hamilton in her From High Noon to Midnight: Western and Hard-boiled Detective Fiction in America.

These films worked. The public has loved the film noir private investigator since he first appeared on screen. He has changed over the years and starred in the novels of contemporary writers such as Robert Crais and Michael Connelly, then into movies and then television. Today, the detective is not just the “lone knight,” but makes up the precinct house crews of shows like Law and Order and, of course, members of the forensics squads of shows like CS and NCIS.

They succeed abroad as they do here. Sam Spade is as big in Europe as Sherlock Homes. Satellite television brings the American detective everywhere. They even made it into the Soviet Union in all those years when the Communists barred most American movies.

I once met a high ranking Soviet leader in the early 1990s. I asked him about American movies in the Soviet Union. “American movies? Oh, you mean gangsters and detectives. That’s all we get,” he laughed. ‘Such fun.”

To obtain the film titles and show times, contact Film Forum at filmforum.org.