Dr. Lawrence Wittner (http://lawrenceswittner.com) is Professor of History emeritus at SUNY/Albany. His latest book is a satirical novel about university corporatization and rebellion, "What’s Going On at UAardvark?" 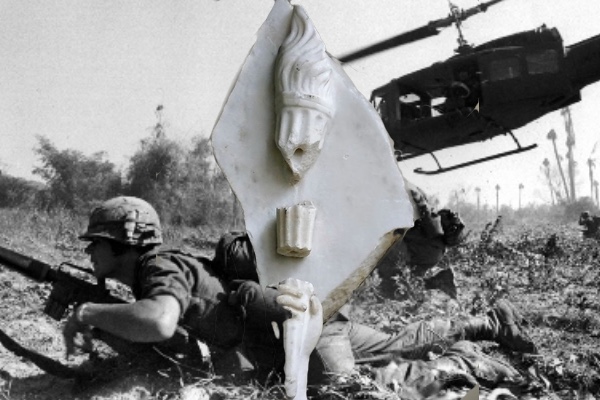 U.S. politicians and pundits are fond of saying that America’s wars have defended America’s freedom. But the historical record doesn’t bear out this contention. In fact, over the past century, U.S. wars have triggered major encroachments upon civil liberties.

Shortly after the United States entered World War I, seven states passed laws abridging freedom of speech and freedom of the press. In June 1917, they were joined by Congress, which passed the Espionage Act. This law granted the federal government the power to censor publications and ban them from the mail, and made the obstruction of the draft or of enlistment in the armed forces punishable by a hefty fine and up to 20 years’ imprisonment. Thereafter, the U.S. government censored newspapers and magazines while conducting prosecutions of the war’s critics, sending over 1,500 to prison with lengthy sentences. This included the prominent labor leader and Socialist Party presidential candidate, Eugene V. Debs. Meanwhile, teachers were fired from the public schools and universities, elected state and federal legislators critical of the war were prevented from taking office, and religious pacifists who refused to carry weapons after they were drafted into the armed forces were forcibly clad in uniform, beaten, stabbed with bayonets, dragged by ropes around their necks, tortured, and killed. It was the worst outbreak of government repression in U.S. history, and sparked the formation of the American Civil Liberties Union.

Although America’s civil liberties record was much better during World War II, the nation’s participation in that conflict did lead to serious infringements upon American freedoms. Probably the best-known was the federal government’s incarceration of 110,000 people of Japanese heritage in internment camps. Two-thirds of them were U.S. citizens, most of whom had been born (and many of whose parents had been born) in the United States. In 1988, recognizing the blatant unconstitutionality of the wartime internment, Congress passed the Civil Liberties Act, which apologized for the action and paid reparations to the survivors and their families. But the war led to other violations of rights, as well, including the imprisonment of roughly 6,000 conscientious objectors and the confinement of some 12,000 others in Civilian Public Service camps. Congress also passed the Smith Act, which made the advocacy of the overthrow of the government a crime punishable by 20 years’ imprisonment. As this legislation was used to prosecute and imprison members of groups that merely talked abstractly of revolution, the U.S. Supreme Court ultimately narrowed its scope considerably.

The civil liberties situation worsened considerably with the advent of the Cold War. In Congress, the House Un-American Activities Committee gathered files on over a million Americans whose loyalty it questioned and held contentious hearings designed to expose alleged subversives. Jumping into the act, Senator Joseph McCarthy began reckless, demagogic accusations of Communism and treason, using his political power and, later, a Senate investigations subcommittee, to defame and intimidate. The president, for his part, established the Attorney General’s List of “subversive” organizations, as well as a federal Loyalty Program, which dismissed thousands of U.S. public servants from their jobs. The compulsory signing of loyalty oaths became standard practice on the federal, state, and local level. By 1952, 30 states required some sort of loyalty oath for teachers. Although this effort to root out “un-Americans” never resulted in the discovery of a single spy or saboteur, it did play havoc with people’s lives and cast a pall of fear over the nation.

When citizen activism bubbled up in the form of protest against the Vietnam War, the federal government responded with a stepped-up program of repression. J. Edgar Hoover, the FBI director, had been expanding his agency’s power ever since World War I, and swung into action with his COINTELPRO program. Designed to expose, disrupt, and neutralize the new wave of activism by any means necessary, COINTELPRO spread false, derogatory information about dissident leaders and organizations, created conflicts among their leaders and members, and resorted to burglary and violence. It targeted nearly all social change movements, including the peace movement, the civil rights movement, the women’s movement, and the environmental movement. The FBI’s files bulged with information on millions of Americans it viewed as national enemies or potential enemies, and it placed many of them under surveillance, including writers, teachers, activists, and U.S. senators Convinced that Martin Luther King, Jr. was a dangerous subversive, Hoover made numerous efforts to destroy him, including encouraging him to commit suicide.

Although revelations about the unsavory activities of U.S. intelligence agencies led to curbs on them in the 1970s, subsequent wars encouraged a new surge of police state measures. In 1981, the FBI opened an investigation of individuals and groups opposing President Reagan’s military intervention in Central America. It utilized informers at political meetings, break-ins at churches, members’ homes, and organizational offices, and surveillance of hundreds of peace demonstrations. Among the targeted groups were the National Council of Churches, the United Auto Workers, and the Maryknoll Sisters of the Roman Catholic Church. After the beginning of the Global War on Terror, the remaining checks on U.S. intelligence agencies were swept aside. The Patriot Act provided the government with sweeping power to spy on individuals, in some cases without any suspicion of wrongdoing, while the National Security Agency collected all Americans’ phone and internet communications.

The problem here lies not in some unique flaw of the United States but, rather, in the fact that warfare is not conducive to freedom. Amid the heightened fear and inflamed nationalism that accompany war, governments and many of their citizens regard dissent as akin to treason. In these circumstances, “national security” usually trumps liberty. As the journalist Randolph Bourne remarked during World War I: “War is the health of the state.” Americans who cherish freedom should keep this in mind.