This Is What It's Like to Be a Refugee

Sigrid MacRae is the author of “A World Elsewhere: An American Woman in Wartime Germany,” which was recently published by Viking.

In 1951, Article 1.A.2 of the United Nations Convention Relating to the Status of Refugees adopted the following definition of a refugee:

[A]ny person who: owing to a well-founded fear of being persecuted for reasons of race, religion, nationality, membership of a particular social group, or political opinion, is outside the country of his nationality, and is unable to or, owing to such fear, is unwilling to avail himself of the protection of that country. 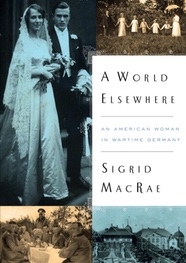 The story may be as old as time; Adam and Eve’s ouster from Eden was just the beginning. “Beside the waters of Babylon, we sat us down in sorrow, and wept as we remembered Zion .…” So goes one version of an ancient lament of the Jewish people in Babylonian captivity - probably not the first, and definitely not the last in the nearly interminable list of exiles and displacements in human history. The verse continues with the captives hanging their harps on the nearby willow trees. This sounds almost quaint compared to the grim stories of the countless thousands who have sung similar laments over the centuries. Native American nations, forced to leave native lands by the Indian Removal Act of 1830, to relocate west of the Mississippi, died by the thousands on what is now called the “Trail of Tears.”

Type “refugees” into Google, it will bring up roughly 10,500,000 entries: Refugees, Refugees international, Refugees in America, Refugees united, Refugees in Central America, Refugees Syria, Refugees Jordan, Refugees Turkey. Africa is particularly rich in refugees: Mali, Congo, Rwanda, Somalia, Sudan, the list goes on. In Africa alone, UNHCR, the United Nations High Commission for Refugees, can expand the wretched tally almost endlessly, expecting some 11 million stateless, homeless, displaced people in 2014. And of course, there are Armenians, Yazidis, the Rohingya in Myanmar. For fear of leaving any group out, the list can run on to hundreds - no thousands - more. One estimate of 531 million refugees worldwide seems barely credible; if it even approaches the truth, it inspires horror.

According to Caryl M. Stern, President of the United States Fund for Unicef, there are currently five Level 3 (the highest level) emergencies in the world, more than she has seen in her entire career. Unicef supplies health care, nutrition, water, education, child protection and emergency response in more than 150 countries and territories. Yet every day, whether in Sierra Leone, Jordan, or elsewhere, 17,000 children are dying of preventable causes because they are not being reached. (NYTimes, October 25, 2014.)

But as anyone who has had direct, or even indirect experience will tell you definitions, bald statistics, and appalling numbers do not begin to tell the dismal story. Small, treasures that carry so much meaning are gone, the refugee is left with only a longing backward glance, heartache, and medical, emotional, and educational needs – too often unmet – shrouded in misery.

Bits of my family’s history demonstrate how reliably revolution and wars create refugees, and how education can help break that grinding predictability. My father’s family was only a tiny fraction of the estimated 1,500,000 exiles who fled the Bolsheviks; fleeing first St. Petersburg in 1918, then, as the Reds approached in the ensuing civil war, their Baltic estate. They arrived in Stettin (now Szczecin), where they were stared at and pointed out as refugees. They were not among the worst examples, but for my 14-year-old father, being uprooted from familiar lands and centuries of tradition was a huge trauma. He sought to overcome it with education, rebuilding a life he could understand and respect.

In September 1939, Hitler traded Latvia and Estonia to Stalin in return for Polish provinces under Russian control, and immediately launched a campaign of massive, ruthless dislocation. His push for a Germanized Utopia in the east shuffled millions across the wartime chessboard like meaningless atoms. He expelled Poles and Jews from newly acquired Polish provinces to “resettle” them with Germans uprooted from elsewhere, my father’s brother’s family among them. They had been farming the few remaining acres of the family’s estate after Latvia, now independent of Russia, had expropriated the rest. With one suitcase and the clothes on their backs, they were forcibly “resettled” in what was essentially alien territory. only to flee again in 1945, to escape the advancing Soviets.

Drafted in 1940 for Hitler’s war in France, my father was soon put in charge of finding accommodations for thousands of French citizens fleeing the German invader. Refugees were everywhere—on foot, with carts and baby carriages, on big wagons loaded with beds, sacks, pots and pans piled high, with old people, women, children, even dogs atop it all, or in the dust, on a string between the wheels. “The misery in which these unhappy refugees live — ” my father wrote, “here, there, wherever they find a place —is terrible.” Threading his way through the pitch-dark Bourges railroad station, only the glow of his flashlight kept him from stepping on the arms and legs of sleepers “gloomy with the sorrow-laden sleep of refugees.” He remembered that “in 1919, we knew that sleep ourselves.” He knew their plight well; he had been part of this cruel cycle. What he did not know was that his brother, and his own wife and children, would soon be part of just such a rag-tag horde, fleeing the advancing Soviet Army, hoping to reach presumed safety somewhere. History was repeating itself.

History does tend repeat itself, and no amount of relief agencies seem to be able to change that. For my father, as for his children, salvation lay in education. But they were lucky; they had the advantage of being set on such a course well before upheaval struck. But what happens to the children for whom displacement, homelessness and lack of schooling become the norm? These issues become the norm very quickly, breeding trauma, depression, more violence and further generations for whom this miserable state is the only one they know.

Only the rare exception, like Justus Uwayesu, breaks out of that norm to provide a ray of light in an otherwise dismal picture. Orphaned at nine by racial genocide in Rwanda, Uwayesu lived, filthy and hungry, in a burned out car on a smoldering garbage dump until he had the good fortune to meet charity worker Clare Effiong and tell her that he wanted to go to school. This fall, he is entering Harvard’s Class of 2019. Will anything like this be true of the any of the hundreds of unaccompanied immigrant children escaping violence and poverty in Honduras, Guatemala and El Savador, who arrived recently at U.S. southern borders?

Few Americans have memories like those that plague these children and so many others. To borrow from poet A.E.Houseman, they stand “alone, and afraid, in a world they never made.” Congress seems unwilling to help, but now is not the time to be hard-nosed. We have to start somewhere, and make the effort to break the terrible cycle, to end at least this one, small Trail of Tears. Let the U. S. Department of Education live up to the mandate, that “All children in the United States are entitled to equal access to a public elementary and secondary education, regardless of their or their parents' actual or perceived national origin, citizenship, or immigration status. This includes recently arrived unaccompanied children, who are in immigration proceedings while residing in local communities with a parent, family member, or other appropriate adult sponsor.” To do anything less is to ensure an enduring, intractable underclass, for whom homelessness, lack of education and violence is the norm.