Ebola and ISIS: The Twin Plagues of Our Time

Timothy R. Furnish holds a PhD in Islamic, African and World history and works as an author, analyst and consultant to the US military. His website is www.mahdiwatch.org and he is on Twitter as @occidentaljihad. 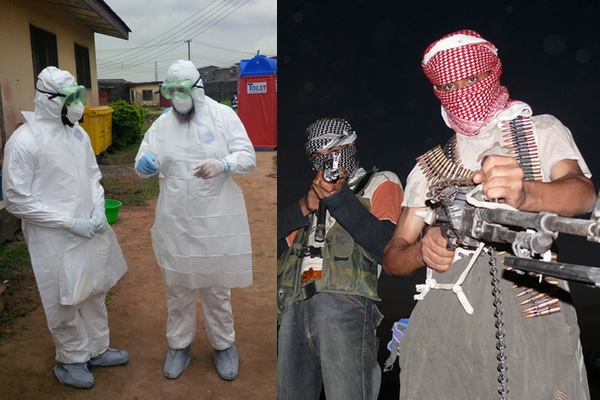 In King Lear the “time’s plague” is said to be “when madmen lead the blind.” While today many Americans might apply the latter description to their government’s handling of the Ebola outbreak, our own era’s scourge has been usually identified as terrorism in general—and the Islamic variant in particular. Corroboration? Some 2/3 of the world’s transnational terorrist groups are Islamic; since 1970 there have been 5,000 violent attacks worldwide in Allah’s name; and post-9/11 over 80% of US terrorism convictions are of Muslims. Even Egypt’s President al-Sisi, at the United Nations last month, explicitly called terrorism a plague—albeit an “abuse” (mutation?) of his religion.

In fact, in many ways the dual blights of our time—Ebola and Islamic terrorism, exemplified by ISIS, the “Islamic State of Iraq and al-Sham” (greater Syria)—are alike. Analyzing jihadism as a disease was first attempted some years ago; this past weekend a US Congressman analogized Ebola to terrorism in terms of effect, if not cause. Overall, five striking similarities between the Ebola epidemic and Islamic terrorism present themselves. Both:

● are deadly, with death tolls in at least the thousands (if not tens of thousands in the case of Islamic terrorism)

● consist of not just an agent but host(s), vectors and an environment in which they operate

● get underestimated or downplayed by the Obama Administration

● require a similar approach: isolation/quarantine, treatment of the disease itself, and vaccination to prevent further spread.

The first speaks for itself, as least for the intellectually honest.

The second requires explanation. The agent is Ebola/jihad-as-violence against non-Muslims—its historic and legitimate meaning. The host or carrier of the disease, initially fruit bats, is increasingly humans; in the case of Islamic terrorism, it’s the literalist adherents of the religion itself. Vectors in Ebola’s case include other primates, particularly humans outside West Africa; for ISIS and its ilk, they consist prosaically of commercial air flights from Western capitals to Turkey—but ideologically of “extremist” mosques, madrasas, clerics and websites as well as “mainstream” Muslim entitites that officially eschew jihad yet espouse a fundamentalist Islam which can serve as a Petri dish for jihadists. The environment in which the Ebola virus moves has expanded from West/Central Africa to a global one—much as ISIS and its ilk (al-Qa`idah, Boko Haram, al-Shabab, etc.) have metastasized globally.

It’s true that panic about terrorism attacks in the US may be unwarranted; yet public concern about a potential Ebola epidemic, easy to mock as irrational and politically opportunistic, is quite reasonable on both scientific and historical grounds.

The Obama Administration has been soft-pedaling Islamic terrorism for its entire tenure (I lost jobs at the Federal Law Enforcement Training Center and Joint Special Operations University for daring to mention jihad in lectures on the history of terrorism); ditto, at least initially, for Ebola (see this clip at 2:00).

Finally: in Ebola’s case, stricken areas should be quarantined, while those with the disease are treated until a way is developed to destroy the virus and/or vaccinate against it. Perhaps the Islamic State can be similarly cut off via cordon sanitaire (originally an anti-Black Plague strategem), then its active hosts (jihadist fighters) eliminated while, simultaneously, its passive hosts and vectors (sympathetic Muslim groups) are neutralized, or at least weakened, by inoculations of truly moderate Islamic teachings from mystical Sufis and non-Qur’anic-literalist sects. Pretending ISIS and its ilk are “nihilistic” rather than rooted in Islamic doctrines and history is absurd.

Ebola and Islamic terrorism are today’s twin plagues. The former has been accurately diagnosed, but awaits the imposition of a rational treatment regime. Doctor Obama, however, insists on treating symptoms and ignoring the truly Islamic causes of the latter—making many Americans doubt not just his vision but his grasp on reality.