Peter Dreier is the Dr. E.P. Clapp Distinguished Professor of Politics, and chair of the Urban & Environmental Policy Department, at Occidental College. His most recent book is The 100 Greatest Americans of the 20th Century: A Social Justice Hall of Fame (Nation Books, 2012). 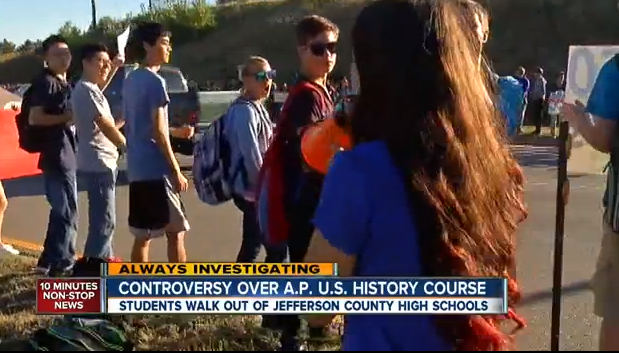 The brave Colorado high school students who are protesting their school board's attempt to rewrite their American history curriculum are doing all Americans a favor by reminding us of the importance of dissent and protest in our nation's history.

The American Historical Association (AHA) and the Organization of American Historians (OAH) should honor these students for standing up to their school board's effort to distort U.S. history around a blatantly political agenda.

The students are reacting to a proposal by the Jefferson County, Colorado school board - the state's second largest school district with about 85,000 students - to change the way history is taught in the schools.

Last November, three new board members were elected to the school board, forming a conservative majority.  One of them, Julie Williams, has led the charge to revise the Advanced Placement U.S. history curriculum to promote patriotism, respect for authority, and free enterprise and to guard against educational materials that "encourage or condone civil disorder."   Williams said she believes that the current Advanced Placement curriculum in American history places an excessive emphasis on "race, gender, class, ethnicity, grievance and American-bashing."

This attempt to ignore or downplay the long tradition of dissent, protest, and conflict that has always shaped American society is not unique to the Jefferson County school board.  It is a key aspect of the right-wing agenda for public education. In the early 1990s, Lynne Cheney, who headed the National Endowment for the Humanities during the first Bush Administration (and is the wife of former VP Dick Cheney), attacked the teaching of American history for presenting a ''grim and gloomy'' account of America's past.   Since then, conservatives on local  school boards  around the country escalated their efforts. It is part of the backlash to the increasing examination by historians of the roles of women, African Americans, Latinos, native Americans, dissenters, and movements in American history.

But such battles go back even further than Cheney's campaign.  In her 1979 book, America Revised,  Frances Fitzgerald examined how the teaching of American history has been the subject of an ongoing debate going back to the 1800s, fueled by political differences over the nature of American identity. Conservatives have traditionally sought to emphasize consensus over conflict in the development of U.S. history textbooks and curriculum.

With the support of many teachers and parents, the Colorado students have engaged in a protest of their own to teach the school board a lesson. It began on Monday, September 22, when about 100 students walked out at Evergreen High School, one of 17 high schools in the suburban district outside Denver.  Since then the protests have gained momentum, fueled by social media and student-to-student contact.  As the New York Times reported, they “streamed out of school and along busy thoroughfares, waving signs and championing the value of learning about the fractious and tumultuous chapters of American history.” By last week, the number of students involved in the protest had  mushroomed.  On Thursday, the Denver Post reported, more than 1,000 students walked out of class behind a new unified slogan — "It's our history; don't make it mystery." Student leaders said that the protests will continue.

"People think because we are teenagers, we don't know things, but we are going home and looking things up,” one high school student told the Post.  “If they don't teach us civil disobedience, we will teach ourselves."

The students’ protest pitted them against the school board’s conservative majority that has received support from Americans for Prosperity-Colorado, a group affiliated with the Koch family foundations. Dustin Zvonek, the group’s director, wrote in an op-ed that last fall’s school board election was an “exciting and hopeful moment for the county and the school district.”

"We've had conservatives on our board before,"  Michele Patterson, the president of the district's PTA, told the New York Times.  "They were wonderful."  But the conservatives on the current school board are "not interested in balance or compromise. They have a political agenda that they're intent on pushing through,"  Patterson said.

One of the district's schools, Columbine High School, was the site of one of the deadliest mass shootings in modern United States history.  In April 1999, two Columbine students killed 12 students and a teacher, and wounded 23 others, before they both committed suicide. The massacre made Columbine a household name.  The current protest by students at Columbine and other district high schools reveals a more positive and healthy side of high school students.

In recent years, the College Board, with the aid of many history professors,  has overhauled the Advanced Placement curriculum and test to emphasize critical thinking and research skills over rote memorization of names, dates, and events.

On Friday, the College Board, issued a statement in support of the Jefferson County rebellion.

"The College Board's Advanced Placement Program supports the actions taken by students in Jefferson County, Colorado to protest a school board member's request to censor aspects of the AP U.S. History course."  It continued:  "These students recognize that the social order can -- and sometimes must -- be disrupted in the pursuit of liberty and justice. Civil disorder and social strife are at the patriotic heart of American history -- from the Boston Tea Party to the American Revolution to the Civil Rights Movement. And these events and ideas are essential within the study of a college-level, AP U.S. History course."

Wouldn't it be fitting and appropriate for the OAH and the AHA to give these students an award at the next meetings for their commitment to the teaching of American history?  Perhaps one or both of these organization could invite some of the students to give a presentation about their protest campaign as part of a plenary session on the teaching of AP American history.  It would surely be the most well-attended session at either conference.

Such a gesture by one or both of the leading organizations of historians would help legitimate what they are doing, draw more attention to their efforts, inspire high school students elsewhere to challenge arbitrary authority, and put the two organizations on record in opposition to the efforts by school boards to distort the teaching of history for overtly political purposes.