Why Does Africa Get Hit with So Many Disasters Like Ebola?

Joseph Yannielli teaches history at Fairfield University. He is completing a study of the Mendi Mission and the role of Africa in the American abolition of slavery.

Looking at the litany of disaster that is recent West African history - slavery, colonialism, genocide, civil war, and now an ebola epidemic of unprecedented scope and voracity - it is tempting to conclude that this is the single unluckiest region on the surface of the planet. Guinea, Liberia, and Sierra Leone, the three countries at the heart of the ebola epidemic, are already home to some of the most devastating infectious diseases known to humans: malaria, yellow fever, typhoid, and lassa fever, among others. Yet all of these, with the exception of lassa fever, were endemic to parts of Europe and the United States throughout the nineteenth century and well into the twentieth. And many regions, including the United States, have endured a history of slavery, colonialism, and civil war. So what makes West Africa different?

One answer is bushmeat. On a recent trip to southern Sierra Leone, I encountered a man with a captured green monkey. A group of us interacted with it, fed it mangos, and studied its behavior. I was later informed that the man planed to kill and eat it, or possibly sell it to be killed and eaten. This is not unusual. Monkeys, rats, bats, and other forest dwellers are a reliable food source, especially in poor rural communities with little access to resources or employment. They are also the likely source of the current ebola outbreak. Although ironclad proof is difficult to find, scientists are reasonably certain that ebola jumped the species barrier thanks to the bushmeat industry. Most deadly viruses - including ebola, HIV, and influenza - are recent species jumpers, initiated by close human contact with animals. This begs the question: why is there such close contact in West Africa?

Southern Sierra Leonean cuisine is among the best I have ever tasted. Stews consisting of rice, cassava, or meat slathered in fresh palm oil are rich and nutritious, especially when washed down with coconut or lime. None of this requires bushmeat. Yet the high price of food staples such as rice, which used to be grown locally, but is now imported from Thailand, has kept alternate sources of nutrition in high demand. Deforestation and corporate land grabs have only accelerated this trend. While officially discouraged, countless people participate in the bushmeat economy or know someone who does. On a bus ride back from a remote province, our driver made several stops to procure fresh cuts from roadside vendors. Not all of the passengers partook, but some may not have had the luxury to choose. A malformed economy can lead to a malformed diet, which can lead to malformed public health.

The reasons for poverty and maldevelopment in West Africa are complex, but many of them can be traced back to the slave trade. The same ecological barriers that saved Africa from outside conquest enabled a social catastrophe. Partial resistance to malaria, small pox, and other diseases made Africans ideally suited to replace the millions of indigenous Americans who died in the wake of the Columbian invasion. As early as the fifteenth century, the demand for healthy workers and other factors conspired to transform Africa into a war zone that churned out millions of slaves for transcontinental and transoceanic markets. The evidence of this is still on display in West African nations. As I hiked, biked, and canoed across Sierra Leone, I met the descendants of European and African middlemen who facilitated the trade. I saw the old iron carronades sitting ominously in the center of town, their purpose long obliterated, but not entirely forgotten. Historians point to this prolonged trauma as the dawn of global capitalism, the origin of our modern world. 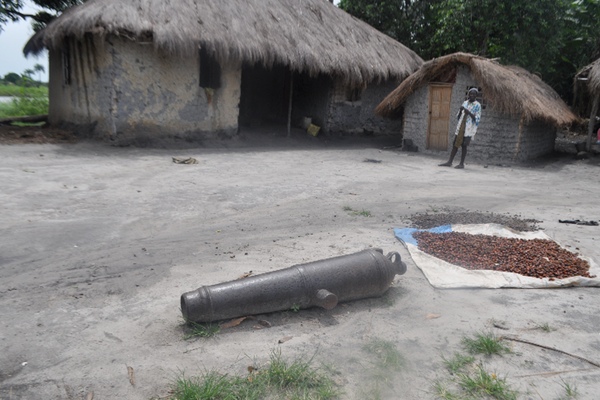 An iron cannon, called a carronade, on display at Gbojohnbwe, a town in Southwestern Sierra Leone.

For the Mende of Sierra Leone, it was a story of zombies. A Mende folktale recorded around the turn of the last century tells of a woman who killed her daughter to send her to the land of the dead, where the pumoi ("white man") dwells. The pumoi was known to return dead bodies to their families bearing gifts of gold. Consumed by greed, the woman killed her daughter, hoping the pumoi would make her rich, and her strategy worked. As her daughter's corpse rose from the grave, however, the woman became overwhelmed with emotion and hugged it, cutting it off at the torso and ruining the payment. This version is only one of many. The history of the slave trade is rife with zombies. The word zombie itself is of African origin and first appeared on the plantations of the Caribbean and the Southern United States. As anthropologists Jean and John Comaroff point out, zombies are a surreal response to the surreal nature of the global marketplace, where massive fortunes appear and disappear overnight and entire populations are rendered destitute and rootless.

West Africa today faces a horror that most Americans, absorbed in World War Z, The Strain, The Walking Dead, and other visions of medical apocalypse, can only imagine. Turned away from hospitals, shunned by families and towns, Africans afflicted with ebola and other diseases have become the true walking dead. They wander the neighborhoods of the poor and haunt the news feeds of the privileged. They are the ghosts of slavery, the afterlives of globalization. Conjured into existence by human history and biology, they will not disappear unless by human effort. As the United States sends thousands of soldiers and Cuba sends a record number of medical professionals to try to contain the ebola crisis, it is even more important to keep the deep roots of this crisis in mind.