Guy Almog is a doctoral student and teaching assistant in the Department of Asian Studies at the University of Haifa. This is a concise version of his article "The Myth of the 'Pacifist' Japanese Constitution" which was published in The Asia-Pacific Journal: Japan Focus. 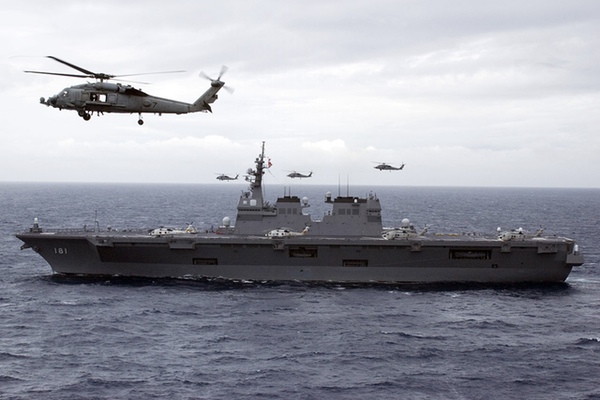 Every now and then I come across ominous headlines such as "Pacifist Japan is inching towards being ‘normal’ " (July 2, 2014, Financial Times), "Japan takes historic step from post-war pacifism, OKs fighting for allies" (July 1, 2014, Reuters), "Japan moves toward ditching its pacifist stance" (Apr 14, 2014, Irish Times), or even "Return of the samurai: Japan steps away from pacifist constitution as military eyes threat from China" (Aug 19, 2014, ABC). But before we start pondering "Why Japan Wants to Break Free of Its Pacifist Past" (Oct 22, 2013, Time), we should ask ourselves what is this "pacifism" we are talking about? Has Japan ever been pacifist? In order to answer these questions, let us first consider some facts:

1. Japan has one of the most powerful and sophisticated militaries in the world, and has been one of the top ten defense spenders for many years. In 2013, for instance, Japan spent some 51 billion dollars on security.

2. Japan maintains a long lasting military alliance with the U.S., which includes the hosting of dozens of American military bases on its soil, not to mention facilities of "joint use." Japan has also been covering most of the operating costs for these bases and the massive U.S. forces stationed there, with the generous annual "Sympathy Budget."

3. Even if post-WWII Japan avoided sending combat troops to assist its allies (the US and the UN) abroad, it has been very supportive of their war efforts in indirect means. Consider for instance the massive economic support Japan provided during the First Gulf War (1991)—more than 10 billion dollars.

We can conjure many more similar facts but the point is clear: it is impossible for a state to be "pacifist" whilst at the same time maintaining such a strong, war-ready military. A "pacifist state" would not have cultivated an alliance with the strongest military in the world, or with any other military for that matter. A "pacifist state" would not have morally supported other countries' war efforts, and certainly would not have contributed billions of dollars to their cause. Accordingly, it is quite obvious that contemporary Japan is not, and never was, pacifist.

This is also a myth. The 1947 Japanese constitution was not written by pacifists, was not intended to represent pacifism (in fact, its drafters publicly announced to the contrary), does not claim to represent pacifism, and was never understood as "pacifist" either by the Japanese government or the Supreme Court. Even if we were to interpret it as to prohibit Japan from maintaining a military, as some claim we should, this does not mean it is a "pacifist constitution." The constitution does not prevent Japan from allying with other militaries and does not prohibit Japan from financially supporting other nations' wars. So even if the Japanese military was to be abolished, it would make little sense labeling Japan as "pacifist."

Again, this assumption does not hold water. As many polls—conducted in different periods since the end of the American occupation—have shown, the majority of Japanese have supported both the existence of the JSDF (Japan Self Defense Force) and the military alliance with the U.S. These support levels have skyrocketed in recent years, and according to a 2012 Yomiuri Shimbun poll, more than 91 percent of Japanese had a "positive impression" of the JSDF. According to the same poll, only 13 percent thought that Article 9 should be interpreted as preventing Japan from participating in foreign military affairs. Keep in mind that I am not claiming that Japan is devoid of pacifists. In fact, there are a relatively large number of pacifists in Japan, but they certainly are not in the majority.

I do not intend to start philosophizing here about the many versions and sub-categories of pacifism, but if we were to label every person who is "pro-peace" as pacifist, then almost everyone today would be considered as such. Reasonably enough, the majority of Japanese leaders and population support notions of peace, prosperity, and security, but they also support notions of just war theory, deeming some wars legitimate (for example, they believe in the right of Japan to participate in a war of self-defense in the case of invasion). Pacifism on the other hand, represents the moral conviction that participation in any war is forbidden (absolute pacifism even shuns any kind of killing, or even violence).

Pacifism does not forbid resistance to war and aggression. It does however forbid violent resistance to war. If we start labeling everyone who says she supports peace but also violent ("defensive") struggle as a pacifist, this term will be nullified of any significant meaning. In a similar vein, it is understandable that contemporary Japan has long refused to spill Japanese blood on foreign battlegrounds. However, paying huge amounts of money to other nations to spill their blood instead does not amount to pacifism.

In conclusion, although the popular perception might suggest otherwise, Japan is not a pacifist state, and never was. The allegedly pacifist constitution— exceptional as it may be—also does not compel pacifism in Japan. Characterizing Japan, or the Japanese as a whole, as pacifists, not only distorts our understanding of past and present realities in Japan, but also does little justice to the real pacifists in Japan, who might lose their unique voice amid the hubbub of the pseudo-pacifist discourse.