What’s Curious about This Picture?

Michael C. C. Adams, Regents Professor of History Emeritus, Northern Kentucky University, is author of  "Living Hell: The Dark Side of the Civil War," "The Best War Ever: America and World War II" (both published by Johns Hopkins), and "Our Masters the Rebels: A Speculation on Union Military Failure in the East, 1861–1865," winner of the Jefferson Davis Prize for the best Civil War book, awarded by the Museum of the Confederacy. 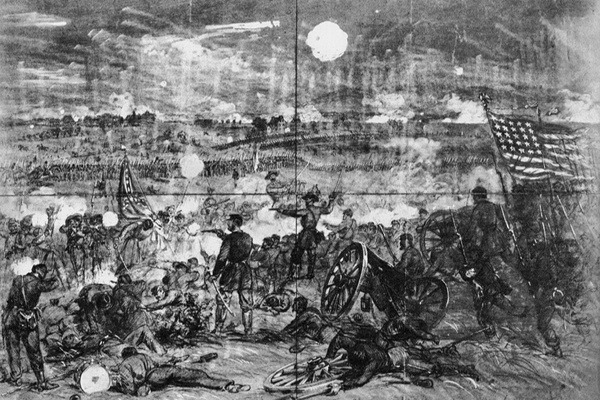 The field sketch above is by combat artist Alfred R. Waud, one of two pictorial correspondents to cover Gettysburg, July 1-3, 1863.  The picture purports to show a phase of Pickett’s Charge on July 3, as rebels try to roll up Union General Winfield Scott Hancock’s left flank, caving him in on Cemetery Hill.  But can the drawing be accurate?  We think of Pickett’s Charge as fluid, more like Waud’s famous sketch of General Lewis Armistead leading his men into the Union guns on Cemetery Ridge, black hat held high on sword.

Any doubt about the picture is increased by the fact that, although Ward’s hand-written tag seems to suggest a date of July 3, he identified the sketch only as “Longstreet’s attack upon the left center,”  and Longstreet had carried out a similar attack on this stretch of the line the previous afternoon, the 2nd.  When the sketch appeared in Harper’s Weekly on August 8, though the subject of Pickett’s Charge was implied, it was not dated, adding to the murk.  The Library of Congress, reflecting the blurring, identifies the picture as Pickett’s Charge but, in its on-line catalog, gives the date of creation as July 2.

An element of confusion is understandable.  But the picture is, in fact, accurate. Waud apparently observed Pickett’s assault and also drew upon other eyewitness accounts to depict the kind of static, close-in fire fight that was all too common in the war.  This is the point I want to draw attention to.  Assuming that the Federal officer in the center, waving pistol and sword, might be six feet tall, and using this as a measure of perspective, how far away is the opposing rebel force?  Murderously close, given that the new rifled muskets had extended effective range and accuracy from, say, seventy-five to five-hundred yards.  Paddy Griffith, a careful student, estimates (in Forward Into Battle:  Fighting Tactics from Waterloo to the Near Future, rev. ed., 1992, p. 78) that 60% of officers waited until the enemy closed to within 100 yards or less before opening fire. The minié ball, a soft-lead, large-caliber round, with a hollow base, could not hold up on contact, causing massive damage, especially at close range.  The ball did not exit cleanly but “travelled” the body, tearing out eyes and teeth, shattering bones and organs.  This was not the intention of the round; it was designed to enter the musket as a smoothbore round that, when ignition filled the hollow base with gas, exited as a rifle bullet fitted snugly to the barrel’s grooves.  Nevertheless, the ultimate effect was to create a soft-head or dum-dum bullet. 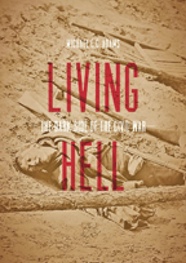 Historical reenactors do valuable work in educating the public.  But they cannot depict the appalling wounds sustained on the firing line.  In Living Hell:  The Dark Side of the Civil War (Johns Hopkins University Press, 2014), I try a different reenactment.  We walk down a firing line, observing men from many different units whose records are documented and whose stories represent the reality of combat.  As examples, we see Corporal James Quick stumble back as a minié enters behind the left jaw and exits through his nose.  Lieutenant William Taylor clutches a severed windpipe, and another officer, shot behind the bridge of the nose, pumps blood from sightless eye sockets when he blinks.

Many wounds, if not fatal, required radical surgery, including amputation, and left lasting nerve damage.  In another staged reenactment, we make the rounds of a neurasthenia ward, in the company of senior surgeon Dr. Weir Mitchell.  His case notes form the basis of our visit.  In one bed, we observe a New York soldier hit in the biceps of the right arm at Gettysburg on July 2.  Months later, his arm is hard and glossy, like marble.  It must be kept wrapped in a wet cloth.  Further on, we meet Private Jospeh Corliss of the 14th New York, shot through the left biceps during the Second Bull Run campaign, August 1862.  He has lost the use of both hands.  The left is shrunken and claw like.  The left arm is frozen across his chest, and the right hangs limp.  Paralysis has reached his left leg.  Like many patients, he requires regular morphine shots and the constant drip of cold water on his limbs to ease the pain.  Weir Mitchell notes that some men go insane because of the endless torment or try to commit suicide.

Given the murderous casualty rates sustained in close-order combat with modern weapons, reaching as high as 60%, why did officers continue to blaze away at the old smoothbore-musket “whites of the eyes” range?  Some officers did understand the problem and adapted to the new dynamics.  Thus, Union General Francis C. Barlow spread out the densely-packed firing line, creating a loosely-spaced skirmish line with plenty of separation between men.  Most officers didn’t change the old procedures.  They distrusted the citizen soldiers’ marksmanship at extended range, and thought they would bolt if deprived of comforting shoulder-to-shoulder contact with comrades in the tightly bunched firing line.

But, the truth is, many simply couldn’t think outside the box of past orthodox practices.  This remained true of the officer corps of many armies well into World War One.  Perhaps Waud’s sketch finally poses this problematical question:  Is it close to a law of human behavior that our physical situation, particularly our technology, changes faster than our ability to adapt to it?  This is a thought that might give us pause as we rush toward the next app that enters the market.