Walter G. Moss is a professor emeritus of history at Eastern Michigan University. He is the author of A History of Russia, Vol. I and Vol. II and is a Contributing Editor of HNN. 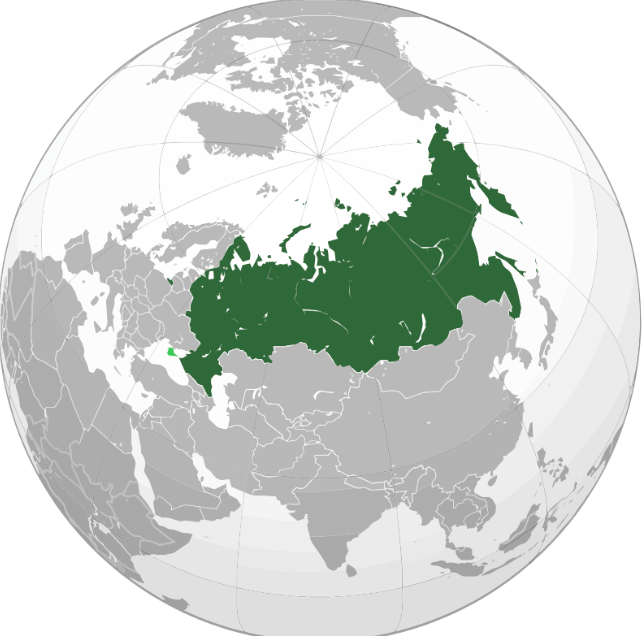 The Russian Federation as depicted on Wikipedia

Among experts and pundits commenting on the continuing Ukrainian crisis two regrettable phenomena have increased: name-calling and misapplying historical lessons. An example of the first failing is Cathy Young’s op ed in The Boston Globe entitled “Putin's strange bedfellows.” Young is a Moscow-born columnist for Newsday and other publications, and she included among the “bedfellows” the Nation’s “resident Russian scholar,” Stephen Cohen.” She also reminded readers that The New Republic referred to him as “Putin’s American apologist.”

Another example of name-calling comes from Anders Aslund, former Swedish diplomat, author of many books on the Russian and Ukrainian economies, and an economic adviser in the 1990s, first to Russia and then to Ukraine. In late August, he sent several notes to Johnson’s Russia List (JRL) in which he accused the list’s editor of running “Russian lies” and of favoring pieces by “Stephen Cohen, Thomas Graham, Dmitri Trenin or other minor Putin apologist[s]” while paying “scant attention” to such “major figures in our fields, such as Michael McFaul, Strobe Talbott and David Remnick.”

Having previously praised JRL for its detailed and varied coverage of the Ukrainian crisis and conflict, I believe Aslund’s attack is unfair. I am not alone. British scholar Richard Sakwa, who has authored many books on Putin and Russian politics, responded to Aslund’s accusations as follows:

I am extremely disturbed by the note from Anders Aslund registering his disquiet about the alleged “Russian lies” that you have carried on your list. Aslund is a scholar for whom I have enormous respect, but with whom I often disagree—and that's the way it should be. I think that the Ukraine crisis has demonstrated the degree to which public and academic discourse has degenerated, and the way in which there are constant attempts to intimidate those who hold different views. Your list is one of the few places that has not succumbed to this degeneration, and offers a whole range of views, often unpopular ones; and I am sure that in historical perspective your choices and work as a whole will be vindicated.

More than this, JRL has been one of the few places where the whole depth of the human tragedy that has engulfed the Donbas, and Ukraine in general, has been reflected, quite often in moving terms.

The tragedy that Sakwa mentions has multiple causes and defies simplistic explanations such as “It’s all Putin’s fault.” This leads us to our second point: the misapplication of historical precedents. Putin’s actions regarding Ukraine have sometimes been compared to Hitler’s. Indeed, in regard to the self-determination of Crimea and Russia’s annexation of it, there are parallels to Hitler’s insistence on “self-determination” for the city of Danzig (Gdansk) and the ethnic Germans in Czechoslovakia’s “Sudetenland.” Although I have previously acknowledged this similarity, the comparison of Putin to Hitler has often gone too far. At the end of August, for example, British Prime Minister David Cameron warned of “appeasing Putin as we did Hitler.” Specifically, he mentioned the “Anglo-French appeasement” of Hitler at the Munich Conference in 1938.

Historians, as well as political leaders and others, often try to apply some lesson or other from the past to help us grapple with present problems. And we are right to do so. But as Rodric Braithwaite, former British ambassador in Moscow, once warned in a History News Network essay about Afghanistan and what lessons U.S. policymakers could learn from the Soviet experience there: “You have to be careful about drawing lessons from history: the gritty details differ every time.”

Indeed, we historians, and others less familiar with history, often apply the wrong lessons. Too many countries entered the Great War (WWI) without realizing what the terrible and horrific consequences might be. The lesson many learned from that collective trauma was to be wary of ever going to war so casually again. Certainly the horrors experienced in WWI led some in Britain and France to be cautious about going to war against Nazi Germany, to appease Hitler, until he attacked Poland in September 1939. And what we learned from appeasing Hitler for so long in the 1930s was that appeasement was a bad word. And thus in the 1960s we were determined not to appease the communists in South Vietnam because appeasement just strengthened the forces of evil. But what we failed to realize was that Ho Chi Minh and the Vietnamese Communists were very different than Hitler and the Nazis. We failed to consider adequately the whole Indochinese relationship to France, the part Ho Chi Minh played in the fight against French colonialism, and the likelihood that many Vietnamese would view U.S. troops as a new unwelcome foreign presence.

In an essay on exercising wise “Political Judgment” Isaiah Berlin once stated: “Obviously what matters is to understand a particular situation in its full uniqueness, the particular men and events and dangers, the particular hopes and fears which are actively at work in a particular place at a particular time.” Too often in the past our political and military leaders have paid insufficient attention to such particulars and have resorted to attacking non-hawkish positions as appeasement.

Ever since Ukrainian protests began in November 2013 over President Viktor Yanukovych’s announcement that his country was backing off closer ties with the European Union, the Ukrainian crisis has been an extremely complex phenomenon. It has involved his ouster, Crimea’s secession and subsequent annexation by Russia, conflict between eastern Ukrainian separatists and Ukrainian government forces, and the exercising of foreign influences on Ukrainians. Although there is little doubt that Russia’s President Putin has backed the separatists, disputes exist as to exactly how and to what extent. The same is true for Western support of Ukrainian political forces which desire closer contact with the United States, the European Union and NATO.

Simplistic accusations, approaches, and applications of history’s “lessons” ignore the “full uniqueness” of events like the Ukrainian crisis. All of us observers of it, regardless of our expertise, are like the blind men in the Buddhist version of the parable where they all describe an elephant differently depending on which part of it they touched. Reality is much larger than most of us can grasp, and like the blind men who only felt a tusk, a trunk, or a tail, we are wrong to think that reality is limited to the small portion we can grasp.

We live in age of political gridlock, know-it-alls, and name calling. We could all use a heavy dose of humility. My own opinion, as expressed previously, is that the present Ukrainian crisis resembles more the tensions preceding World War I than those leading up to World War II. While the West should avoid any appeasement than encourages further aggression, greater dangers now face us: stumbling into some sort of tragic conflict, as Europe did in 1914, or beginning a new Cold-War era.

At an early September meeting, NATO promised to provide Ukraine with training and help to better organize its military, and some people in the United States and in other NATO countries debate whether to supply Ukraine with radar and anti-tank weapons. The Ron Paul Institute reported that a “spokesman for US-backed Ukraine president Petro Poroshenko revealed: ‘At the NATO summit agreements were reached on the provision of military advisers and supplies of modern armaments from the United States, France, Italy, Poland and Norway.’ ” Although a cease-fire in eastern Ukraine was proclaimed around the same time, many outside observers remained skeptical regarding how long it could last.

The key question for many U.S. citizens regarding Ukraine is, “What should the U.S. response be.” Many right-wing critics of President Obama fault him for not being tough enough with Putin, for not showing him that aggression doesn’t pay. Like Britain’s Prime Minister Cameron they warn of any 1930s type appeasement. Some of these critics say we should furnish more arms to Ukraine.

Three former United States ambassadors to Russia, who collectively served under presidents Reagan, George Bush Sr., and Clinton criticize such a step as “more of the same, with little if any assurance of better outcomes.” They note that relations between Washington and Moscow “have descended into attempts by each side to pressure the other, tit-for-tat actions, shrill propaganda statements, and the steady diminution of engagement between the two governments and societies.” They go on to say:

What the Western strategy lacks is an equally vigorous diplomatic approach to ending this conflict. Diplomatic efforts should aim to provide Ukraine and its neighbors with a future that can sustain peace and security for all countries in the area; re-establish respect for the core principles of Europe’s political order; and open the way for more productive American-Russian relations. . . . It is time for the United States to use its diplomatic assets, including our new ambassador in Moscow [John Tefft], to take active leadership of diplomatic efforts to resolve the crisis over Ukraine.

This advice of the former ambassadors seems sound. We need less hubris, name calling and applying simplistic “historical lessons.” Instead, we should be humble truth-seekers who encourage wise and imaginative diplomacy.