William Lambers is the author of Ending World Hunger and the Road to Peace. He is a blogger for the Huffington Post. 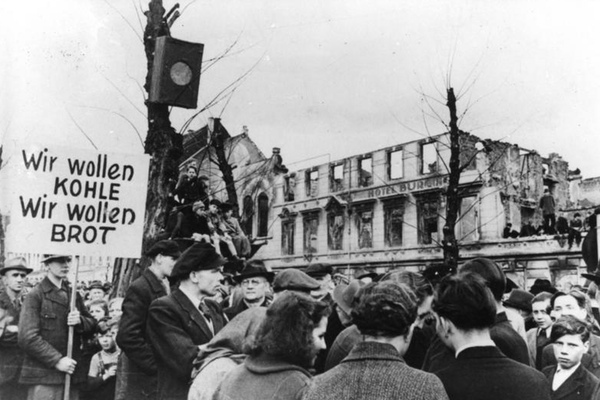 It all started around a bonfire one autumn night in 1945. Students at the College of Mount St. Joseph in Ohio were fired up to begin a project to "Help those who cannot help themselves."

While the guns of World War II had thankfully fallen silent, by no means was the tragedy over. Far from it. Hunger, illness, and cold, were harming hundreds of millions of people. Europe was threatened with a famine. Hunger can be even more vicious than war.

Mount students and alumni were going to help. They would collect donations of clothing as part of a national campaign organized by Catholic Relief Services (CRS). This was followed up by the "Food for the War-Stricken" Campaign, also organized by CRS (then known as War Relief Services).

The Mount students collected 1000 canned food items in just one week. They gathered 14,000 articles of clothing! The clothing was sent on to France, which was left in ruin by the war. The food would be used in CRS programs all around the world. For instance, in Austria, CRS was about to embark on a large school feeding program.

A former Mount philosophy professor, Father Hoban, had joined the CRS staff in Europe. He would remind students that generosity must extend beyond our shores, to all mankind. You don't put limits on that. You must help all those in need, even your enemies. Father Hoban could see how many cities overseas, "still show the marks of war.”

Years of humanitarian aid from the United States would culminate in the Marshall Plan of 1948, which rebuilt war-torn Europe. This was the recovery program crafted by the Secretary of State and former Army Chief George Marshall.

Mount St. Joseph would carry out its own Little Marshall Plan in support of the cause. This meant students putting aside some of their own needs for the benefit of others. That was their calling. Starting in 1947 each Monday would be dedicated to a collection for the Bishops Relief Campaign.

Students over in the war countries were struggling to pursue their own education, so Mount students took action to help them. In 1947, again around a bonfire, students pledged their support. Patricia Burns, Campus Chairman of the campaign, spoke of the physical and mental hardships facing students worldwide. Joan Christie, The National Chairperson of Student Relief, explained how no one could study on a starvation diet, with little or no heat or clothing.

The Mount students began a series of "Stay at home weekends." Instead of using their own money for regular weekend activities, they would send it to those struggling to get the basics of food, water and shelter.

The students realized how much they had, and they needed to share with those struggling to rebuild from the ashes of war. The Stay at Home Weekends plan spread to other colleges. Prayer services and collections continued. Virginia Barrows, a student relief campaign leader, said, "always mindful of the spiritual needs of these afflicted people, the material phase cannot be neglected."

In 1947, for Thanksgiving, the Home Economics Club of the college launched a "Foreign Relief Food Drive." This was in response to a nationwide plea from Archbishop John T. McNicholas of Cincinnati, who was an administrator with Catholic Relief Services. The Mount's classes actually competed against each other to see who would collect the most canned food.

At that time some major national campaigns were underway to feed the hungry overseas. All this while Congress was debating the Marshall Plan and an interim food aid program. The Friendship Train collected canned goods across the country that autumn and the "Silent Guest" plan led to CARE packages for the holidays. Together with the Catholic Relief Services food drive and other initiatives, we saw a food for peace movement.

Reflecting on the Mount's role in this humanitarian outreach, an editorial in the school newspaper asked, "How did we, a small college for women, perform such a tremendous task?"  They had the spirit and the right ideals to make it happen.  They were part of the one of the greatest achievements in history, the Winning of the Peace after World War II.

As college campuses open again we are struck by some news disturbingly similar to that of the late 1940's. In fact, we are experiencing the most refugees worldwide since World War II.

Wars in Syria, Iraq, South Sudan, Central African Republic and other areas have dramatically increased the numbers of displaced and hungry people. We know from this chaos emerges dark forces like the terrorist army ISIL. That is why George Marshall advocated the policy of "against hunger, poverty, desperation, and chaos.”

The only force that can overcome the despair in the world is the humanitarians and the peacemakers. We need those willing to lead in that direction. As the Mount school paper stated during the Marshall Plan era, "we shall add strength to the force we hope to yield."

Oh, and that "small college" at Mount St. Joseph is now a University. It has expanded enrollment for women and men, more programs and facilities, and now a football team. What hasn't changed though is the school's most important characteristic, the spirit of giving and compassion, and its role as a leader for peace and justice.

A young woman from Latvia, Lucy Slice, knew first hand of that spirit. She was one of those innocent victims of war, having been displaced on Christmas Eve, 1944 as Russian forces neared her hometown of Riga. She was now a refugee. She did find work with the United Nations Relief and Rehabilitation Administration. But this humanitarian agency was shut down in 1948.

But then Lucy got the pleasant surprise of her life by getting permission to come to America. It’s what she exclaimed as “a passport to a new life.” She would be enrolled as a nursing student at Mount St. Joseph. As she moved into the dorms she could not believe the peace that surrounded her. No longer would she have to pre-pack food rations in case she had to flee again. She remarked to the Cincinnati Enquirer, "But I guess this life here is normal living, isn't it?" That is what all peoples are entitled to have.

We know that the strength and spirit of the Greatest Generation is with us. We know it can be summoned again during these dark times. Suffering war victims all around the globe are hoping someone will hear their cry for help. They will look to those who have the strength to provide that aid. Whatever campus or community you reside, that can be you.