by Kathleen A. Feeley and Jennifer Frost 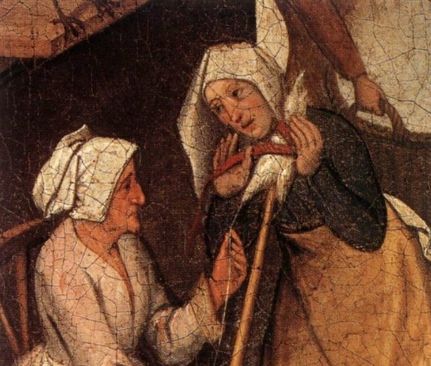 Gossip, rumor, hearsay, tittle-tattle, scuttlebutt, scandal, dirt.  Whatever the term, gossip is one of the most common—and most condemned—forms of discourse in which we engage.  Around two-thirds of our daily conversation focuses on personal and interpersonal matters.  Gossip is a consummate human activity and occurs across time and space.  Anthropologists have discovered gossip’s prevalence in a range of cultures.  Yet, even as gossip is intensely involving and interesting, it is also widely denigrated.  At best, gossip is trivial and idle; at worst, it is invasive and destructive.  Religious injunctions against both relaying and receiving gossip appear in Christian, Jewish, and Islamic texts, and concerns about the moral ramifications of gossip continue.

Gossip’s contradictory status as frivolous and formidable has drawn the attention of many commentators, researchers, and, increasingly, historians.  The essays in our new book, When Private Talk Goes Public: Gossip in American History, explore the role of gossip in American society, culture, and politics from the colonial period to today.  Assessing the function and impact of gossip at different moments and locations in U.S history demonstrates gossip’s importance, change, and continuity over time. 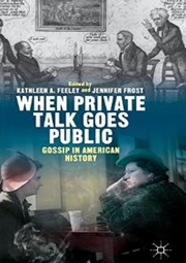 The very definition of gossip has changed over time.  In English, the word originated as a noun, “godsibb,” meaning a relative in God, and connoted a godparent or a person in attendance at a christening.   By the sixteenth and seventeenth century, however, a new, gender-specific definition of gossip became common: a woman attending a mother at childbirth.  At the same time, gossip also became a verb and devalued, as with Dr. Johnson’s 1755 dictionary definition of gossip: “One who runs about tattling like women at a lying-in.” Popular understandings of gossip continue its negative association with women’s talk, but historical evidence shows both women and men engaging in the practice of gossip.

Although contemporary definitions of gossip vary, they all share a concern with the personal and often the private, and, thus, gossip can be identified as “private talk.”  Gossip makes private matters public, and, for many, gossip’s most transgressive quality is precisely how it blurs the imaginary yet influential boundary between public and private.  For historians, gossip’s boundary-crossing provides us with direct evidence of its existence in the past and the sources necessary to make it a subject of historical inquiry.

Gossip in the past and the present can be found in private and published letters, diaries and memoirs, courtroom testimony, law and legal writings, government records, newspapers and celebrity magazines, press releases, and internet video blogs.  This range of sources indicates gossip’s various forms and settings from the colonial era to the twenty-first century.  Gossip is an evolving practice as the modes of communication change over time with the advent of new technologies and mass media.  Even so, this variety does not preclude important similarities and continuity in the historical practice and function of gossip in America for nearly four centuries.

The primary function of gossip is as a means of circulating information about other people’s lives, but it has many others.  Personally, gossiping is a pleasure, even if a guilty pleasure.  Human beings enjoy learning about one another and expressing their own thoughts and feelings.  Gossiping can yield power for individuals but also poses a risk.  Thus, the practice of gossip can be double-edged, functioning both to the benefit and detriment of the purveyors and recipients of gossip.

Gossip also has social and cultural functions.  It builds interpersonal intimacy and trust and a sense of solidarity and community.  Of course, by defining who is “in” gossip also defines who is “out,” fostering both social inclusion and exclusion.  Gossip’s cultural function lies in its story-telling.  It provides opportunities to discuss, question, and reinforce cultural norms and values, helping people make sense of their world.

Finally, gossip is political.  It occurs across all the levels of politics, from the personal and domestic through the local and communal to the national and international.  By making private information public, gossipers aim to direct public opinion, shape alliances, and determine reputations.  If the content is flattering, gossip can enhance reputations, but if it is not, gossip can destroy them.  Gossip can be wielded by the less powerful to assail the powerful in society, or used by social and political elites to expand or defend their power.

However used (or abused), gossip has consequences, and has had impact on people, events, and developments in the past.  The essays in our book demonstrate gossip’s significance for American history, from the colonial New England witchcraft crisis to antebellum political and racial discourse to the Cold War lavender scare to modern celebrity journalism in print and on line.

Attention to the histories of gossip in the United States contributes to contemporary discussions about the practice of history.  Gossip is not only an important subject of historical inquiry but also a legitimate category of historical evidence.  Gossip is usually viewed as suspect historical evidence because it cannot be verified as true or false.  Yet, historical information and knowledge can be teased out from gossip, and for some groups and topics gossip may be the best or only available source of evidence.  So, gossip and history are integrally related.  Whether we understand gossip as “counterhistory” or history as an “elevated form” of gossip, they both offer narratives and interpretations of the past.  Paying historical attention to gossip allows us to see plenty and from a new perspective.