Why Doesn't Everybody Know Who Alice Paul Was and What She Did?

J.D. Zahniser is an independent scholar. She holds a doctorate in American and Women's Studies.  Amelia R. Fry was an oral historian at Regional Oral History Office, Bancroft Library, University of California, Berkeley. 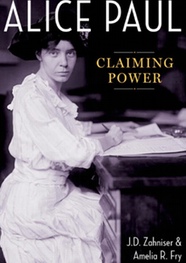 Alice Paul is a familiar name among historians of women, but many Americans have never heard of her. Some may remember the HBO docudrama Iron-Jawed Angels starring Hilary Swank which popularized the sensational events of November 1917, when Paul endured imprisonment, psychological terror, and forced-feeding. What was her crime? She wanted the right to vote.

Following Paul’s lead, nearly 200 women picketed the White House, putting pressure on then-President Wilson to advocate an amendment to the U.S. Constitution granting American women the right to vote. One hundred sixty-six pickets were jailed for obstructing traffic by the White House. Their real crime was choosing political protest for suffrage over war work in the hyperpatriotic environment which accompanied the American entry into World War I in April 1917. Most did not object to the war; nevertheless the suffragists became among the first dissenters arrested, their protest visibly demonstrating the hypocrisy in Wilson’s famous call to “save the world for democracy.”

The campaign to win the vote for women had reached its seventh decade when Alice Paul rose to prominence. She organized the great 1913 woman suffrage procession in Washington, DC. The parade vaulted the votes-for-women cause to national attention, thanks to Paul’s skills and the violence which marked the actual event. When police proved inadequate to protect the line of march, suffragists were pushed, pulled, and roughed up by an aggressive crowd of spectators. Most marchers soldiered on through the tumult, insisting on their right to display their desire to be accorded the most fundamental right of American citizenship: the right to consent to their government by voting. After the parade, suffragists put pressure on Congress to hold the miscreants responsible. The subsequent Senate hearing into the parade turmoil kept the suffrage cause in the spotlight for another month.

The 1913 suffrage parade was the first successful national political demonstration down that quintessential corridor of American power, Pennsylvania Avenue. Lucy G. Barber’s Marching on Washington (2004) details the tradition which evolved in the wake of the 1913 procession. The march was only the first of the spectacles through which Alice Paul challenged the nation to enfranchise all its women. But her methods quickly became too controversial for the suffrage movement and within a year, she found herself leading a militant offshoot of the movement which became the National Woman’s Party (NWP), a group vilified by mainstream suffragists. The picketing crusade of 1917 was Paul’s most successful and infamous operation. 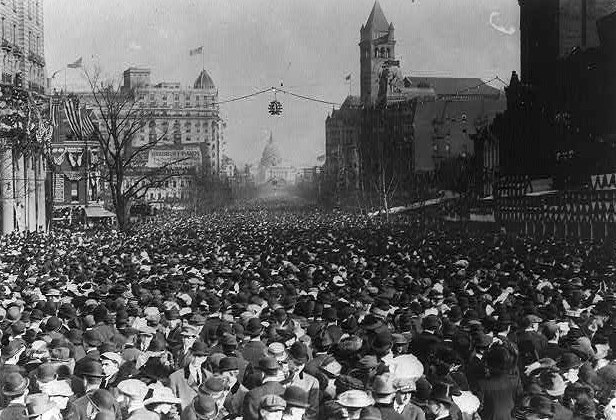 Most historians now believe that the political pressure Alice Paul exerted on Woodrow Wilson hastened his January 1918 endorsement of a constitutional amendment granting women the right to vote. Both mainstream and militant factions ultimately brought the longstanding suffrage drive to a successful conclusion in August 1920 and the Nineteenth Amendment became law.

For decades, the story of Alice Paul was all but lost. Between the 1920s and 1950s, the specter of Communism colored the way Americans viewed political protest. Though Paul’s activism continued—she authored the Equal Rights Amendment in 1923 and worked for its passage until her death—even she chose conventional political methods because of the taint which the Russian Revolution and its Communist victors had acquired. In addition, interest in women’s history, a byproduct of the Progressive era, waned.

The memoirs and histories of the woman suffrage movement appearing after 1920 did not redound to the benefit of Alice Paul’s legacy. Two well-received books by NWP devotees were all but left in the dust when, in 1922, Ida Husted Harper published the final volume of the massive History of Woman Suffrage (HWS), work begun in the 19th century by Susan B. Anthony. This allegedly comprehensive account, together with mainstream suffrage leader Carrie Chapman Catt’s memoir with Nettie Schuler, Woman Suffrage and Politics (C. Scribner’s, 1923), became the pre-eminent source of record on the woman suffrage movement.

Alice Paul would have the last laugh. She outlived other woman suffrage leaders and, as another women’s movement gathered strength in the early 1970s, she became a living link to the first wave of feminist activism. The Equal Rights Amendment (ERA), which she had promoted for decades, was taken up by the new generation. They carried banners proclaiming “Alice Paul, We’re Here” on ERA marches which themselves echoed the 1913 suffrage parade.

As modern activists and historians unearthed women’s history for themselves, Alice Paul’s brand of spectacular politics appealed to many, particularly those also drawn into social protest by civil rights and anti-war demonstrations. It is no accident, then, that Paul’s historical reputation began to improve in the 1970s.

Eleanor Flexner’s Century of Struggle (Belknap, 1959) was the first sign of a revival of interest in the history of women. Flexner acknowledged the contributions of both wings of the suffrage movement to the eventual suffrage victory, though she made clear her preferences for mainstream methods.

By the 1970s, a growing interest among the new generation’s scholars in Alice Paul and the NWP generated fresh accounts of suffrage activism, both print and oral histories. The person who once seemed a dangerous force was reborn by historians as a charismatic, courageous leader. About the same time, UC-Berkeley’s Bancroft Library and its Regional Oral History Office recognized that suffrage activists were literally a dying breed. Alice Paul was among the surviving women who agreed to record lengthy oral histories for the Suffragists Oral History Project.

The public memory of Alice Paul was not erased by her death in 1977. A few years later, feminists in her home state of New Jersey took up the cause of her legacy. They purchased Paul’s estate for deposit in the Smithsonian Institution and Boston’s Schlesinger Library on the History of Women and several years later purchased the Paul family home in Mount Laurel, New Jersey. Paulsdale is now a national historic landmark housing the Alice Paul Institute. In 2004, the visibility of Alice Paul’s public memory reached new heights with the HBO broadcast Iron-Jawed Angels.

The centennial of the Nineteenth Amendment’s ratification approaches in 2020. We are already seeing the valiant struggle of Alice Paul and others to win the right to vote gaining renewed attention, with books like my own Alice Paul: Claiming Power (2014), the only in-depth account of Paul’s path to leadership, and efforts like Ruby Films’ Suffragette (2015).

Alice Paul’s story continues in the present, as ERA advocates gear up for a renewed drive to success. Paul’s 1917 political protest can inform current challenges, whether it is understanding the aims of the Occupy movement, the motives of Voter ID advocates, or other campaigns. Though our history often forgets those who protest or dissent, these Americans truly exemplify the founding principles of our nation.