Clay Risen is the author of "The Bill of the Century: The Epic Battle for the Civil Rights Act" and "A Nation on Fire: America in the Wake of the King Assassination." 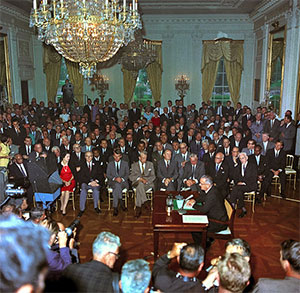 [Editor:  This is an excerpt from The Bill of the Century by Clay Risen.]

By the time the Civil Rights Act reached the Senate floor for debate in March 1964, the pro-segregation Southern wing of the Democratic Party—a minority, but a minority packed with talented senior legislators—had blocked hundreds of civil rights bills. They often accomplished this by refusing to allow the Senate to vote on the legislation, a maneuver called a filibuster. Contrary to the Mr. Smith Goes to Washington and Wendy Davis mystique, Southern Democrat filibusters involved nearly two dozen senators, who, by coordinating their speeches, could draw out a “debate” almost indefinitely. To beat a filibuster, a bill’s supporters needed two-thirds of the Senate—67 senators—to vote for cloture, or an end to the debate—a move that had never succeeded on any previous civil rights bill. And a filibuster against the Civil Rights Act was virtually guaranteed.

As expected, the act, which included bans on discrimination in jobs, schools, and public accommodations, was immediately filibustered. At the time less than half the Senate supported cloture. Many of the opponents were Southerners, but many others were conservative Republicans who opposed segregation but were wary of expanding federal power. So while Southerners filibustered on the chamber floor, the bill’s backers—both Democrats and Republicans, along with hundreds of civil rights activists—lobbied, wheedled and sometimes outright threatened the holdout senators to change their votes.

It took more than two months, but by the second week of June, the bill’s leadership figured they were close enough to try for a cloture vote. They only had one shot: If cloture failed, Southerners would have a new burst of momentum behind the filibuster, enough to kill the bill. But if it succeeded, the bill would advance to a final vote and almost surely become law—and change the country forever.