Review of “Jewish Resistance Against the Nazis”

Murray Polner, a book reviewer for the HNN, was editor of "Present Tense," wrote "Rabbi: The American Experience," and co-edited "Peace Justice & Jews and The Challenge of Shalom" 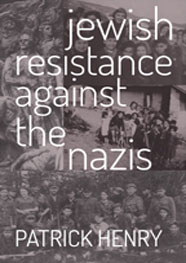 What more is there to say about the Holocaust that hasn’t been said before?

Herded into concentration camps, one-third killed far from the death camps, dragged from their homes in the Baltics, Ukraine, Poland, Belgium, France, Greece, Croatia and every other country under Nazi and Fascist control, one- and a half million of their children slaughtered, their women and girls raped, and still far too many people believe that they didn’t fight back. But if anyone resisted and fled where could they find sanctuary? Who would hide them? How could my Ukrainian Jewish aunt and her family and neighbors in the small town of Lyubar have defied the einsatzruppen, Christopher Browning’s “ordinary men” and their homicidal Ukrainian and Romanian henchmen before she and others were hung and shot by them? Who actually believes that otherwise peaceable civilians could successfully battle an enemy who by 1941 had conquered much of Europe? Yet, in spite of all the obvious limits, many did fight back as best they could.

Richard Middleton-Kaplan, professor of English and Humanities at Harper College, has wisely observed, “Given the evidence that exists to disprove the myth [that Jews did not resist], a historian might consider the issue to require no further discussion. But if Jewish resistance has been amply demonstrated to specialists, public perception remains unaware of the proof.”

Patrick Henry’s masterly collection of cerebral and quite readable essays in Jewish Resistance Against the Nazis, proves that Jews fighting the Nazis and their allies, violently and nonviolently, was fairly common. Frequently relying on unfamiliar sources, Henry’s essayists depict all kinds of resistance, from futile skirmishes with a handful of axes, hammers and rocks as in the late 1944 revolt at Auschwitz, then the last remaining death camp, to the larger revolts in the Bialystok, Vilna and Warsaw ghettos.

Henry, an emeritus professor at Whitman College (full disclosure: we are colleagues on another publication) explains that these desperate actions and many more took place, “without any hope of forcing the Germans to change their minds.” But they had other benefits. Timothy Snyder, in Bloodlands:Europe Between Hitler and Stalin, shrewdly remarked that ghetto resistance “worked powerfully against the anti-Semitic stereotype, present in the Home Army and in Polish society, that Jews would not fight.”

Powerlessness, “Henry rightly emphasizes, “is not synonymous with passivity,” There were in fact many kinds of resistance. Some fought back by saving children, their own and others as well. Alexander Donat, who was the printer of a magazine I once edited, sent his 5- year-old son to a Polish Catholic convent where courageous nuns saved his life. Pacifist Huguenots in France shielded Jewish children and extraordinary people such as Raoul Wallenberg rescued many others. Fleeing was another form of nonviolent resistance. 76,000 French Jews were sent eastward by Vichy and their German overlords but some managed to cross the Pyrenees into Spain while others found refuge in places like Shanghai, Bolivia, and the United States.

Even within the heart of Nazi-controlled Europe many Jews resisted. In Berlin, as early as 1933 and until 1941 anti-Nazi Jewish young women (some as early as fourteen) began provoking Nazis when they brought flowers to the graves of socialists Rosa Luxembourg and Karl Liebknecht, both assassinated much earlier by the neo-Nazi Freikorps. In late as 1942, Dieter Kuntz of the U. S. Holocaust Memorial Museum describes how the Herbert Baum group, comprised of anti-Nazi Jews and non-Jews, quixotically tried to destroy an anti-Soviet, anti-Jewish exhibit and were publicly guillotined.

Jewish Resistance Against the Nazis portrays many other examples of Jewish resistance. In Suzanne Vroman’s essay –she is professor emerita of sociology at Bard College and lived in Belgium when the Germans invaded in 1940; a year later she and her family escaped and found refuge in the Belgian Congo. “Anti-fascist Jews and non-Jews were an active minority of resisters but “the clandestine Communist organization of foreigners were primarily Jewish.” Elsewhere, young Zionists fought, as did Mischlinge or half-Jews and their non-Jewish spouses, the latter carrying out the only successful protest against the Gestapo as Nathan Stoltzfus’s Resistance of the Heart: Intermarriage and the Rosenstrasse Protest in Nazi Germany made clear.

Citing Abba Kovner, the partisan fighter and later Israeli poet, Steve Bowman, Professor of Judaic Studies at the University of Cincinnati, writes that “the forefront of the battle against the Nazi invaders in Lithuania consisted of Jews” while “The Lithuanian division in the Red Army was 70 percent Jewish, including officers, and the language was Yiddish.”

Robert Jan van Pelt of the University of Waterloo served as an expert witness for the defense in the civil suit brought by British Holocaust denier David Irving against Deborah Lipstadt and Penguin Books and tells of Sonderkommando revolts in Treblinka in August 1943, Sobibor in October 1943 and Auschwitz in October 1944. Henry also wisely included selections on Italy, Greece, Romania, Scandinavia, Slovakia and several accounts of children resisting “through Diary writing and Song.”

Esther Gitman escaped as a toddler with her mother from pro-Nazi-and Ustase-occupied Croatia. Years after she wrote When Courage Prevailed: Rescue and Survival of Jews in the Independent State of Croatia, 1941-194. In it, she writes that initially most Croatian Jews tried to ignore the Croatian Ustasi’s virulent anti -Semitism and pro-Nazi sentiments. The Ustase, Slavko Goldstein, a Croatian Jew, wrote in his revealing book 1941: The Year That Keeps Returning (not cited by Henry), murdered 32,000 Jews plus 40,000 Romani and 350,000 Serbs. Eventually, 1600 Jews did join the partisans as doctors, nurses, writers, cooks and fighters.

If asked why Jews didn’t resist, Berel Lang, professor emeritus at SUNY-Albany, responds: “To whom are the Jews being compared?” Three million Soviet troops were taken prisoner yet remained essentially passive in spite of horrendous treatment. “Of the seven prisoner rebellions in concentration and death camps,” adds Middleton-Kaplan, “six were enacted by Jews; the only other one was by Soviet prisoners of war.” Think of the million or so victims of Pol Pot in Cambodia and the Hutus in Rwanda who did little or nothing to battle their killers.

Yehudah Bauer, former director of Yad Vashem and author of Jews for Sale? and Rethinking the Holocaust, used the Hebrew word amidah or “standing up against” to include armed and unarmed resistance. In Eastern European ghettos theaters, religious and musical groups, art exhibits, food sharing, schools and orphanages were organized while under siege, and they too were acts of resistance, “life sustaining activities that fostered human dignity.” And when his orphanage children were deported to Treblinka, the nonviolent resister Janus Kolchak refused to abandon the kids, dying alongside of them in the gas chamber.

There were also numerous examples of spiritual, nonviolent resistance as when the Shidlowitz rebbe, Rabbi Haim Rabinowitz ( not included in this book) comforted people pressed up against him in cattle cars for four days without food or water. "Fellow Jews,” he assured them, “do not fear death. To die for Kiddush Hashem (“sanctification of the Name”) is a great privilege.”

In the end, then, the myth of Jewish passivity during the Holocaust years is just that: A myth.

At the very end of his thoughtful introduction, Henry, a Catholic, wonders whether the long history of Christian, especially Catholic, anti-Semitism contributed to the Nazi nightmare. Why, we must ask, were so many in Catholics in Latvia, Lithuania, Estonia, Poland and Ukraine so eager to collaborate with the Nazis and their genocidal schemes? Henry offers his hope that “Christian apologies to the Jews and burgeoning examples of interfaith reconciliation offer a ray of hope that whatever residue of anti-Judaism and anti-Semitism” still exists will in time be erased.