The Most Bizarre Presidential Assassination Plots

Mel Ayton is the author of numerous books and articles. He has an MA postgraduate degree in History from Durham University and is a former Fulbright Teacher in the United States. Ayton, who lives in County Durham, England, has appeared in documentaries produced by the National Geographic Channel and the Discovery Channel and has worked as a historical consultant for the BBC. His latest book, Hunting the President, an examination of plots, threats and assassination attempts against American presidents, was published by Regnery in April 2014. 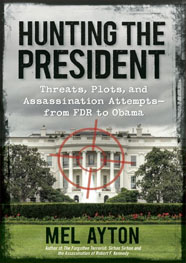 There is no way of knowing how many plots or planned attacks have been made against American presidents. Amongst the many assassination schemes in the public record, however, are numerous instances which have involved bizarre plots by individuals or groups of individuals to assassinate the president.

In 1943 two separate plots to kill President Roosevelt were discovered. An armed Walter Harold Best stalked Roosevelt and spent ten days waiting across the street from the White House for his chance to shoot him. He was only prevented from continuing with his plans when he was arrested for jaywalking during the period when his wife was warning the authorities about her husband’s plans.

Christopher Clarence Cull, a bomb expert in possession of nitro-glycerine, believed Hitler was the “greatest man in the world”. In 1943 he made plans to become America’s first presidential suicide bomber. When Cull was eventually arrested he confessed. Secret Service agents found a black suitcase containing two bottles of nitro-glycerine and a bottle of nitric acid in his hotel room. Cull signed a statement admitting his plans to assassinate Roosevelt by preparing three nitro-glycerine bombs, strapping them about his waist, wearing an Army uniform to get close to Roosevelt’s car as the president exited the White House and “blow myself and the (redacted) President to bits and also kill any goddamn Secret Service agents or other people who were nearby.”

During President Johnson’s time in office he was subject to a wide array of threats by individuals who saw themselves as successors to Lee Harvey Oswald. They included a Buffalo, New York man who planned a JFK-style sniper attack on Johnson. In October 1964 when LBJ visited the city for a campaign speech, Secret Service agents received a tip-off. When they arrived at the workplace of the would-be assassin agents observed a rifle lying on the ledge of a window overlooking the street below which was on the presidential motorcade route. When agents searched him they found a single cartridge in his pocket. When questioned, he said he was a Brigadier General in the Minutemen and that he needed only “one bullet to do the job”.

In March 1966 a 27-year-old New Jersey Air Force veteran, Oswald S. Pick, made two telephone calls to the FBI and said he was going to kill President Johnson and that “two Cubans had put him up to it”. FBI agents thought Pick’s first and last name may in some bizarre way have connected the would-be assassin to JFK’s killer. (Author’s Note: Pick was the surname of Lee Harvey Oswald’s half-brother) Pick was tracked down and arrested as he was about to board a Washington DC - bound train.

In June 1971 the Secret Service discovered a plan to kill President Nixon during a presidential visit to Chicago. James E. Beavers wandered around near the hotel where Nixon was staying before placing his gun on a salt box in full view of the public. When Beavers was challenged by police he refused to hand over his gun and was fatally wounded.

President Nixon, who had been stalked by Alabama Governor George Wallace’s would-be assassin Arthur Bremer, was also the subject of a strange plot to assassinate him that same year. Andrew B. Topping was a “well-off” investment banker and right-wing radical whose wife had committed suicide shortly after the birth of their son. Topping, who blamed “pro- rightist forces beyond his control” for his wife’s death, had made a request for an appointment to see President Nixon. His request prompted Secret Service agents to interview him and carry out a background check. A short while later one of Topping’s acquaintances arrived at Secret Service offices in New York and told agents that Topping had asked him for assistance in finding an assassin who would kill the president. The Secret Service arranged for one of their undercover agents, Stewart J. Henry, to pose as an assassin for hire. After negotiations, Topping handed over $1000 and made it clear the money was “to kill Nixon”. Topping was immediately arrested and charged with “threatening and attempting to kill the president of the United States”.

In 1975 Gary Steven DeSure and Preston ‘Mike’ Mayo plotted to assassinate Nixon’s successor, Gerald Ford, by causing an explosion designed to distract Secret Service agents then shooting the president with a high-powered sniper rifle. They planned the attack for the very day Lynette ‘Squeaky’ Fromme pulled a gun on Ford as the president walked from his hotel in Sacramento to the State Capitol building. However, the hapless duo stole a television set from a motel and left a written statement about the plot in their car when they abandoned it after a police chase.

In 1980 would-be Reagan presidential assassin John Hinckley stalked President Carter. He changed his mind about shooting him at a political campaign rally when a Secret Service agent stared at him and Hinckley lost his nerve. Later, Hinckley waited in the hallway outside Edward Kennedy’s Washington DC office to shoot the senator, eventually losing patience and leaving.

By 1983 a presidential stalker given the name ‘Catman’ by Secret Service agents had called the White House numerous times and sent letters to President Reagan which mentioned security details that were unknown to the general public. He also sent close-up photographs of his intended victim when the president appeared at political events and “lots of photos of cats”. When Secret Service agents eventually caught Catman on a New York subway in 1983 they discovered photographs which revealed he had positioned himself outside the fence at the New York City mayor’s residence during a presidential visit. Catman had been close enough to shoot President Reagan but his shot had apparently been blocked by agents.

In 1990, after Ronald Reagan left office, Gregory Stuart Gordon broke into his home and attempted to ‘strangle’ the former president before being subdued by Secret Service agents.

In the 1990s President George H.W. Bush was also the target of bizarre assassination attempts including an attempt to kill him by Roger Hines. In January 1992 Hines stole a .357 magnum revolver and 50 rounds of ammunition in Oregon before travelling to a school in Washington DC where he believed the President would be making an appearance. However, Hines chose the wrong school.

In 1998 President Clinton was not only a target for Islamic terror groups but also a little known radical separatist organization, the Republic of Texas, which believed that the state was illegally annexed by the United States in 1845 and should be a separate nation. A document entitled “Declaration of War” was attached to an email sent to the president by the group. During the FBI’s investigation of their assassination plans an FBI informant said the conspirators planned to modify a BIC lighter so that it would expel air instead of propane. They then planned to glue a hypodermic needle to the opening of the lighter and a cactus thorn would be inserted that would be coated with a biological agent such as anthrax, botulism or HIV. The home-made weapon was to be used to kill the president.

Two of the most bizarre threats any president has ever faced occurred during the presidencies of George W. Bush and Barack Obama. In August 2004 a Buffalo man, Darrel David Alford, told acquaintances he wanted to equip one of his model airplanes with a bomb then take it to an arena or stadium where Bush was to speak. Alford intended to detonate the bomb as his plane flew over the platform where Bush was to give his speech. Darrel pleaded guilty to making threats against the president.

In 2013 Glendon Scott and Eric Feight planned on building an X-Ray gun to target ‘Muslims’ and President Obama with a lethal dose of radiation ‘silently and from a distance’ using their machine. Crawford and Freight were arrested in June 2013 after Crawford tried to connect a remote activation device to an X-Ray machine. However, the machine had been rendered inoperable by undercover agents. Despite scepticism from scientists prosecutor John Duncan said, “From our investigation, the device....would have been capable of emitting X-Ray radiation that would have caused death.”