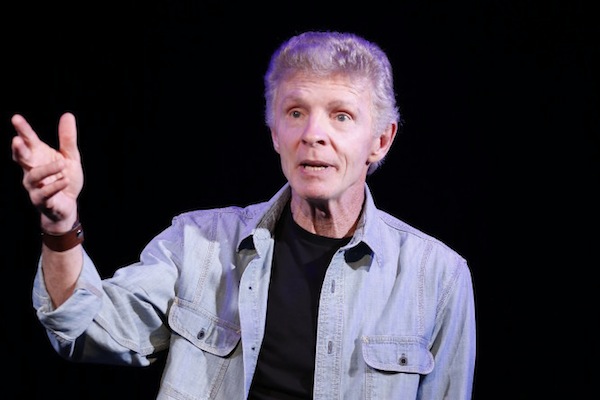 Image courtesy of the author.

Who can forget the 1978 film Midnight Express, the story of 23-year-old  Billy Hayes’ 1975 escape from Imrali, a dank, dark, dirty Turkish prison, where he was incarcerated for life (later reduced to 30 years) for trying to smuggle hashish out of Istanbul?

The movie, topped by Billy’s unique and daring escape, won Oscars for Stone (screenplay) and Giorgio Moroder (score). It was a box office hit and remains a fan favorite on television.

Now Billy Hayes, older and much wiser, is telling the harrowing tale again on stage in a one man play that opened last week in New York. Hayes is a gifted storyteller and over the course of the play recounts his arrest at the Istanbul airport, five years in jail and his heart stopping escape in a small sailboat across seventeen miles of water in the Sea of Marmara.

The story is simply riveting. Most people in the theater seemed to know the tale and luxuriated in Billy’s behind the scenes explanation of the drama and revelations about his disputes with filmmaker Stone and the way that Stone twisted history to produce his movie.

Hayes, who is an actor and director, does not stage the show as a one man play. It is more of a storytelling session and he draws his characters, good guys and bad guys, as he takes the audience on a twisting path through the prison where he stayed and the Turkish judicial system. The story is better told this way and, best of all, the centerpiece of it is the storyteller himself. His account of the actual escape, when he hijacked a sailboat and headed off in the dead of night for the coast in a storm tossed sea, is by far the best part of the story. You can’t help but put yourself in his place and try to figure out what you would have done  yourself.

He starts the entire evening off by joking that trying to smuggle hashish out of an Istanbul airport, filled with hundreds of police, was a pretty stupid thing to do. Everybody laughs. Then he launches into a colorful and highly detailed description of the arrest and his utter amazement that he was put in prison for thirty years (there was a lot of international politics involve here, too, and it was at the height of the drug smuggling craze in the world). Then he moves into his life in first one prison, then another and his efforts to survive.

There is a lot of tenderness in the play, such as his stories about his father and how much he tried to help Billy, even smuggling $2,700 to him in prison. He says, too, that a friend of was murdered in his efforts to help Billy and other friends left behind while he fled.

The eighty-minute play is followed by a fifteen minute and question and answer session and here people get to ask anything they want and Hayes answers all the questions. At the talk back I went to he covered the invented ending of the movie, his disputes with Stone in 1978, his views on drugs (legalize them all), his respect for the Turks and a neat little story about his unheralded return to Istanbul several years ago to participate in a law enforcement convention. The talkback makes this a double header of a good show.

There is a lot of Hollywood history and examples of how history is distorted in the one man show, too, because Stone essentially made up a false ending to the movie and never told audiences that Billy had been in two prisons, not one. He had Billy kill a guard, which Hayes never did. He also invented a heated, accusatory speech that Hayes delivered at this sentencing, a speech so awful that for twenty years after his arrest Turkey had an arrest warrant out for him. Bitterly, Hayes said that Stone and others in the film company explained that the false ending was much easier to film and cost far less money. He is still very angry over the sentencing speech that he never gave, though. Stone later apologized or putting the heated speech into the screenplay

You must remember that Hayes, a journalism major at Marquette University at the time of his arrest, was an admitted drug smuggler who had made three previous trips to Istanbul and successfully smuggled out drugs and sold them to his friends back in America. He was caught on trip number four. Even so, thirty years in prison was an overly harsh sentence and here, as in the film, you quickly start to root for Hayes.

There is much left out of the show, such as Hayes’ friends in prison and his later life, but Riding the Midnight Express is a trip worth taking for any lover of theater and history.

PRODUCTION: Produced by Jonathan Chang, Jann Cobler, others. Sets and Lights: Josh Iacovelli. The show is directed by John Gould Rubin. It runs through March 23.