Martin Kramer is president of Shalem College in Jerusalem. 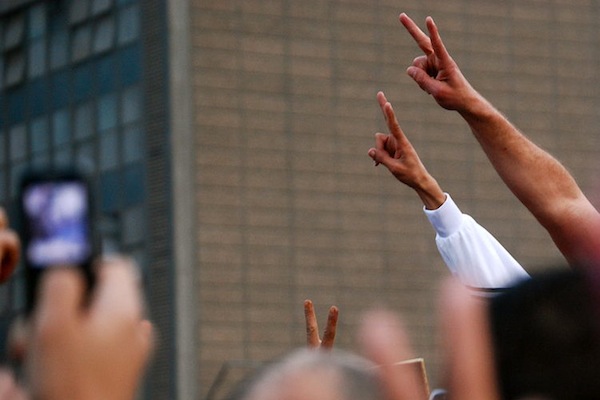 Scene from the Egyptian Revolution. Image via Wiki Commons.

In October, I made a short presentation to an American-Israeli conclave in Washington. This is the major part of it.

This is an extraordinary time in the Middle East, but just what we have witnessed has eluded consensus. That is reflected in the terminology. Some called it the “Arab Spring,” by analogy to the democratic transformations in Europe. When it became clear that the path wasn’t going to be as smooth as in Europe, others backtracked and called it the “Arab Awakening,” which sounds like a longer-term proposition. Still others, who saw Islamists initially triumph in elections, took to calling it the “Islamist Winter.” The terminological confusion is a reflection of analytical disagreement.

Another source of confusion has been the widespread resort to historical analogies. When it didn’t look like the transition would be that smooth, or might even be aborted, commentary began to appear comparing the events to Europe in 1848. When optimists wanted to make the point that sometimes successful revolutions take a long time, they pointed to the American revolution of 1776. When pessimists wanted to emphasize that revolutions conceived in idealism could go astray, they pointed to the Russian Revolution of 1917. Finally, some circled back to 1989, but this time not with an emphasis on the “Spring” analogy to Poland, but on the “Balkan Ghosts” analogy to Bosnia. Analogies are a crutch, to which we return when our analysis is thin.

As a historian by training, I have no difficulty predicting that the debate over terminology and the application of analogies will go on for many years to come. If historians still debate the causes of the French Revolution, there is no reason to think the events of the past couple of years won’t be debated far into the future. That’s how we historians make our living.

But you don’t make your living that way. You do analysis of the moment, and you have to make a judgment call based on what evidence there is now, in order to predict the future trajectory on which to base policy and strategy. So while it would suit me just fine to say that it’s too early to tell, let me go out on a limb and make some generalizations.

Let us agree that what we are witnessing is a very profound crisis. Regimes have fallen, tens of thousands have died, millions are refugees. There is even a nominal price tag. The banking giant HSBC has just released a report estimating that this crisis will have cost Middle Eastern countries $800 billion in lost output by the end of next year. It also estimates that the combined GDP of the seven most-impacted countries -- Egypt, Tunisia, Libya, Syria, Jordan, Lebanon and Bahrain -- will be 35% lower by the end of 2014 than it would have been if the 2011 uprisings hadn’t happened.

This is wealth destruction on a massive scale. And it is not as if these economies had a big buffer to absorb this hit: the already-poor have become desperately poor. As against these mounting costs, the gains have been debatable. Has there been progress toward good governance and the rule of law? Or descent into rule by militias and pervasive insecurity? The situation differs from country to country, but overall, it is hard to be optimistic about any of the impacted countries, which are mired in various degrees of turmoil.

But before we can say what sort of crisis this is, let’s say what sort of crisis it isn’t. It isn’t just a repudiation of authoritarian rule. It is true that the kind of rule based on personality cult and pervasive fear has lost its grip. The United States contributed to that by removing Saddam Hussein from power in 2003. Saddam was the avatar for a certain kind of regime, and his fall exposed others who ruled in the same way. His removal dissipated the aura of fear that surrounded such regimes, because the praetorian guards entrusted with their defense could be put to flight. The enablers of these regimes were prepared to torture to defend them. What they weren’t prepared to do was to fight and die. That proved to be the case from Tunisia to Egypt to Libya.

But if it was a revulsion against authoritarian rule, and a yearning for the dignity conferred by democracy, how does one explain the support of Egyptians for a Muslim Brotherhood regime which was itself authoritarian? Or the counter-revolution in Egypt, which returned a military junta to power by coup? Perhaps this isn’t a political crisis of authoritarianism versus democracy, between bad (authoritarian) guys and good (democratic) guys. In the case of Egypt, there isn’t even an agreement over who the bad guys and good guys are. And there isn’t a consensus over Syria either, where only a handful of the players are committed to democracy in a form we would recognize.

If it wasn’t about freedom and democracy, was it a “return to Islam”? It briefly did look just like that. For a moment, it seemed like another analogy, Iran 1979, might be apt. Certainly the status quo has been eroded by the spread of an Islamist social movement among the masses. But Islamists didn’t lead the uprisings, and they haven’t been able to consolidate their early victories in elections and secure positions of dominance. Islamists have struggled without success to translate their social base into coherent and effective politics. Perhaps this is because people aren’t persuaded they have the answer to the crisis, or even understand it.

Was it an economic crisis? Many of you are no doubt familiar with what I might call, for lack of a better term, deep explanations for the revolutions. One of them, backed up by many statistics, is the demographic youth bulge which has surged through the Arab world. This part of the world is in a transition to lower rates of fertility, but it is now paying the price of extraordinarily high fertility rates registered twenty to thirty years ago. Millions of young people have flooded the labor markets, and no economy in the world could keep up. The turmoil is sometimes interpreted as the outburst of frustrated young men venting their rage at their own indolence and impotence.

But if this were primarily an economic crisis, why did it erupt at a time of economic expansion and growth? And why wasn’t it anticipated that the resulting instability would actually worsen the economic plight of these countries?

Having now exhausted various explanations, and found them wanting, I proceed to my sweeping generalization. This is a crisis of culture. That is to say, it is more than a political or social or economic crisis. Of course it has elements of all of these things, but at its most fundamental, it is a crisis of culture -- to be precise, the implosion of the hybrid civilization that dominated the twentieth century in the Arab world.

That hybrid was the defensive, selective adaptation of Islamic traditions to the ways of the West. The idea was that the tradition could be preserved, that its essence could be defended, while making adjustments to modernity as needed. The timeless character of the political, religious, and social traditions of the region could be upheld, even as upgrades were made to accommodate modernity. In Turkey, Atatürk’s cultural revolution had thrown all of tradition overboard and embraced the ways of Europe without reservation. The Arabs resisted the notion, and their leaders promised them a different path, a hybrid of the Arab-Islamic tradition with Western-style modernity.

That failure was long concealed by a mixture of regime maneuvering and the prop of oil. It has been cushioned in those places in the Arab Gulf where rulers have given up on the better part of Arab-Islamic civilization, inviting the Louvre and the Guggenheim and American universities to build branches, and allowing expatriates to outnumber the Arabs. These are the places that have become refuges from chaos elsewhere, and that have even profited from it. But in the great centers of Arab-Islamic civilization, from Cairo to Damascus to Baghdad, the crisis of the political order is primarily a symptom of the collapse of their own hybrid of tradition and modernity.

The failure of the hybrid is most dramatically evidenced by the rise of sectarianism. The Sunni-Shiite divide has lots of layers, including a disparity of power, often the legacy of colonialism. But the mindset of sectarianism is thoroughly pre-modern. Modern nationalism was devised at least in part to blunt sectarianism among Muslims.

But because the tradition had to be respected, the hybrid civilization of the region tolerated the exclusion of Jews and the marginalization of Christians. It was only one step from there to the defamation by Shiite of Sunni, by Sunni of Alawi, and on and on. The jihad of Muslim against Muslim, whether waged by Lebanon’s Hezbollah in Syria, or by extreme Islamists in parts of Iraq and northern Syria, is a huge reversal. It is like a page taken straight out of eighth- or ninth-century Islamic history. Here we are in a Middle East where the major divide isn’t over the form of government, or the nature of the economic system, or the extent of individual liberty. It is over a dispute dating from the seventh century of Islam -- the sort of thing Europe left behind when it secularized during the Enlightenment.

There are some who would actually reify this by inscribing it on the map. There is a certain line of reasoning, that what the Middle East really needs is a new map, drawn along sectarian lines. This is how the argument goes: The 1916 Sykes-Picot map is worn out, it is coming apart at the seams. The lines on the political map are losing their meaning, the lines that aren’t yet on the map are becoming realities. An alternative map is needed, and most of the alternatives have a standard feature: divvying up the Fertile Crescent along sectarian and ethnic lines.

There is no doubt that the present crisis is weakening some states, and that they are losing their ability to project central power up to their borders. Sectarian and ethnic separatism does have purchase. But even if new lines could be drawn, how would this solve the crisis? How would it make the region better suited to embrace modernity? The fact is that sectarian statelets, predicated on pre-modern identities, could well go the other way. Think about the Sunni Islamist quasi-states centered around Raqqa in northern Syria and Gaza on the Mediterranean. These aren’t going to become the next Dubai or Qatar, and not just because they don’t have oil. If the map does come undone, and new statelets or quasi-states or mini-states are born, that is just as likely to bring about more sectarian and ethnic conflict than ease it.

In summation, there are millions of people who now must reconfigure the way they see themselves and the world, not just through a political revolution, but through a cultural one. There is no way any outside power outside can deliberately accelerate or channel this transformation. And since we are much closer to the beginning of that process than the end, the region will remain a cauldron for years if not decades to come.

• I also commend this 10-point scorecard by BBC correspondent Kevin Connolly. Just one irony: the winners of the “Arab Spring” haven’t been Arabs, but Iran and the Kurds.