Stephen Halbrook is Research Fellow with the Independent Institute and author of the new book, Gun Control in the Third Reich: Disarming the Jews and “Enemies of the State.” 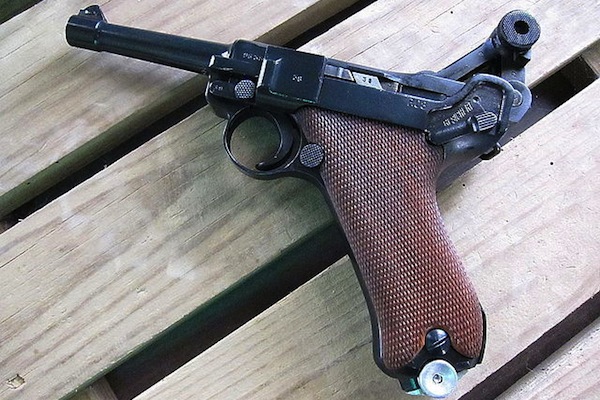 This month marks the seventy-fifth anniversary of the Night of the Broken Glass, or Kristallnacht, the Nazi pogrom against Germany’s Jews in November 1938. Historians have documented everything about it except what made it so easy to attack the defenseless Jews without fear of resistance. Their guns were registered and were easily confiscated in the weeks before the onslaught.

How this was possible can be seen through the eyes of one of the countless victims, who happened to be a renowned German athlete. Alfred Flatow won first place in gymnastics at the 1896 Olympics. In 1932, he dutifully registered three handguns as required by a decree of the Weimar Republic. The decree also provided that, if “public safety” so required, the guns could be confiscated. Officials gullibly neglected to consider that only law-abiding citizens would register, while political extremists and criminals would not. But the interior minister warned that the gun registration records must be carefully secured so they would not fall into the hands of extremist elements.

The ultimate extremist group led by Adolf Hitler seized power just a year later, in 1933. The Nazis immediately used the firearm registration records to identify, disarm, and attack “enemies of the state,” a euphemism for Social Democrats and political opponents of all types, who were invariably castigated as “Communists.” Search and seizure operations were conducted for guns and “subversive” literature in Jewish communities and working class neighborhoods.

As time went by, Jews were deprived of more and more rights of citizenship. The Gestapo cautioned the police that it would endanger public safety to issue gun permits to Jews. Hitler faked a show of tolerance for the 1936 Olympics in Berlin, but Flatow refused to attend the reunion there of former champions -- he was Jewish and would not endorse the farce.

By fall of 1938, the Nazis were ratcheting up measures to expropriate the assets of Jews. To ensure that they had no means of resistance, the Jews were ordered to surrender their firearms.

Alfred Flatow walked into a Berlin police station to comply with the command and was arrested on the spot, as were other Jews standing in line. The arrest report confirmed that his pistols were duly registered, which was how the police knew he had them. While no law prohibited a Jew from owning guns, the report recited the Nazi mantra: “Jews in possession of weapons are a danger to the German people.” Despite his compliance, Flatow was turned over to the Gestapo.

This scenario took place all over Germany -- firearms were confiscated from all Jews registered as gun owners. As this was occurring, a wholly irrelevant event provided just the pretext needed to launch a violent attack on the Jewish community -- a Polish teenager who was Jewish shot a German diplomat in Paris. When he died, Hitler ordered Propaganda Minister Joseph Goebbels to launch Kristallnacht, a carefully orchestrated Nazi onslaught against the entire Jewish community in Germany that horrified the world and even the German public.

Under the pretense of searching for weapons, Nazi goon squads vandalized Jewish homes, ransacked businesses, and torched synagogues. Jews were terrorized, beaten, and murdered. Orders were sent to shoot anyone who resisted.

SS head Heinrich Himmler decreed that possession of a gun by a Jew was punishable by twenty years in a concentration camp. Some 20,000 Jewish men were thrown into such camps for this or for just being Jewish. The Jewish community was then held at ransom to pay for the damage done by the Nazis.

These horrific events were widely reported in American newspapers. After Hitler launched World War II, the United States took measures to prepare in case it was dragged into the conflict. Prompted by reports of Gestapo methods, Congress passed a law prohibiting registration of firearms and reaffirming that the Second Amendment right to keep and bear arms may not be infringed. The sneak attack on Pearl Harbor took place just days later.

Kristallnacht has been called “the day the Holocaust began.” Alfred Flatow’s footsteps can be followed to see why. He would be required to wear the Star of David. In 1942, he was deported to the Theresienstadt concentration camp, where he starved to death.

What thoughts may have occurred to Flatow in his last days? Memories of the Olympics and of a better Germany may have flashed before his eyes. Did he have second thoughts on whether he should have registered his handguns in 1932? Or whether he should have obediently surrendered the guns at a Berlin police station in 1938 as ordered by Nazi decree? Did he fantasize shooting Nazis? It is difficult to imagine that he had no regrets.

Today, as in Weimar Germany, gun registration and prohibition are depicted as benign and progressive. Government should keep strict track of gun owners and ban any guns it wishes, because it is inherently good and will take care of you. The experiences of Hitler’s Germany, or for that matter Stalin’s Russia or Pol Pot’s Cambodia, are beyond American exceptionalism. Perhaps that could have something to do with our Bill of Rights, which guarantees the rights to free speech and to keep and bear arms and which the American people understand and exercise.

There are reasons why history does not always repeat itself.