Jennifer Polk: "Recent PhDs Need to Have Their Confidence Boosted" 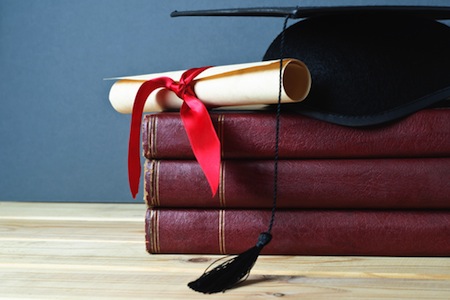 The academc job market remains in the doldrums. Recent PhDs continue to outstrip new positions, and the adjunctification of higher ed. in general -- and historians in particular -- continues unabated.

It's not surprising, then, that a growing contingent of recent PhDs are standing athwart academic history yelling 'stop!'

A robust conversation about alternatives to traditional academic (and even traditional non-academic) employment has developed online, on both the hallowed webpages of the Chronicle of Higher Eduation, in the trenches of the Twittersphere (under the hashtag #altac), here on HNN, and perhaps most significantly in the blogosphere.

There are now literally dozens of websites for recent PhDs looking to break out of the academy (not all of them in history): Beyond Academe, Versatile PhD, and now From PhD to Life, a resource put together by Jennifer Polk, who graduated with a PhD in American foreign policy history in June 2012 from the University of Toronto. She now works as a freelancer and a career coach.

I spoke with Ms. Polk over the phone about her unusual path in and out of the academy.

Tell us a little about your background. You were at the University of Toronto and received your PhD in 2012?

Yes, that's right. I went straight through, and finished at thirty-two, graduating from U of T in June 2012. I did American foreign relations history. At the end of the day, I'm glad I did it, and I'm proud of my dissertation and the work that went into it, but at the end of the day it was a slog. I'm not sure what's next in terms of being an historian or being a scholar, though. I was asked to write a piece for something called “The Rogue Scholar Salon,” and I had to ask myself, am I a scholar? Am I a rogue? What am I doing? So I think it's an open question. Identity can be trippy!

When you were twenty-two, twenty-three, or twenty-four, fresh out of college and just starting your grad program, where did you see yourself at thirty-two?

You know, I don't … I'm not sure I remember. I don't think I thought about it, really. I really enjoyed my undergrad, went straight to a two-year master's, really loved my master's, and I went into the archives for the first time. I got to read documents – diaries, newspapers, public records, and it was so fun! My master's thesis was the best, hardest thing I've ever done. And I had really good professors, full funding, and I was so excited about going into a PhD. Plus, my PhD supervisor was kinda famous and I really respected her. I also didn't know what else I'd do if I weren't going into a PhD program, so that was also a part of it. I thought, well, I'm good at this, I'm getting paid to do this, I like doing it, and I don't know what else I'd do.

So I really didn't think about it. Plus, and this is kind of a depressing thought, I figured no one was going to hire me to do anything else!

So when did things change for you?

I think it happened when I was doing my dissertation, because I didn't really enjoy that process. I was real active in the department, and I remember going to meetings and hearing that half of all the PhDs in the department go on to get tenure-track jobs. I know now that, comparatively speaking, that's a really good statistic, but as a graduate student it was intimidating. But as I lost my enthusiasm for graduate education, I said to myself, “I'm not sure about this.” I never wanted to actively be a professor; it was more, “I like doing this, and I get paid to do this.” It was only after I graduated, not all that long ago, that I decided “No, I'm not going to be a professor.”

I never actually applied for any academic jobs after graduating. I still had money in the bank, and I know that if you don't have money in the bank, there's pressure to be employed right away, but since I did, I was under less pressure and could take some time to decide what I really wanted.

And so what made you decide to start blogging about your experience?

Well, I'd done a blog before, but not with this particular scope. So I knew how to do the medium. But when I realized what I was doing post-PhD wasn't really working out for me, and I needed help, I knew statistically (from the AHA) that there were a lot of other people in the same place I was, but I didn't actually know any of the people who were doing this. And as I started to read more about alternative career tracks – by talking to people, reading books, etc. – and by working with a career coach, who I hired privately, I realized I'd been learning a lot, and that maybe I could help other people by making the process a little faster and a little easier than it was for me. And it's taken on its own life from there!

Seems like there's a real hunger for these kinds of blogs out there, from what you're doing to the Versatile PhD to Beyond Academe.

Yes, the conversation is really active. And for me, that was really important as I started blogging, discovering this whole world, reminded again of #altac and the community on Twitter around these issues. It's been amazing for me, personally. And professionally!

What do you think the value of your PhD was? Do you have any regrets about getting it?

Kind of? I really value the fact I have high-level critical thinking skills, though I don't use it all the time (nor would I want to!). I've got paid something – enough to live what I consider to be a pretty good life. I got to go to archives, conferences, and sometimes I could sleep in 'til noon! I think it'd be awesome if more people could have that experience if they wanted it, but I know that's kind of a vague answer.

As for where I'm heading now, I'm so excited to be getting to know other PhDs who've had the same experience, and who are smart, motivated, and very creative people. There's some much we can do – and are doing in the world!

Do you think that with the more robust social safety net in Canada, is there more of an opportunity to tread that kind of path, where you can get a PhD and not worry as much about being an adjunct without health insurance for the rest of your life?

Well, I don't have to worry about health insurance. My roommate actually got hit by a car a month ago, and she's in the hospital, and that's covered. But I do have to pay my own dental, and eyeglasses, etc. In a lot of ways, I've been lucky, though, because I've had money saved up. A lot of people I've spoken with don't have that luxury. I think that's why some people end up adjuncting for longer than they'd like.

What made you decide to become a career coach?

Well, I'd hired a career coach back in October, and we started working together back in November (this actually came out of my reading of Versatile PhD, and a thread on informational interviews, which I decided I needed to get busy on!) It was really important for me to talk to a third party. So many of my grad school friends kept going on about how I'd never be happy outside of academia, because people wouldn't be smart and I'd never be happy in the corporate world. I needed to talk to a neutral person. And since that was valuable, and since I like brainstorming and problem-solving, it seemed like a good move. There wasn't a lightbulb moment, though.

You obviously work with a lot of recent PhDs, helping them to orientate themselves. What challenges do recent PhDs face on the #altac job market and what do they bring to the table to help overcome those challenges?

Well, we don't get jobs by applying for jobs. That's not how it works either inside or outside academia. People get jobs by networking. That's something foreign to a lot of academics. I think that's difficult when you first encounter it. And since we're coming out of academia, we don't necessarily know a lot of people to network with. And there's a confident issue, and a language problem. A lot of people feel they can only get entry-level jobs because they have no experience, and a lot feel they're also paradoxically never going to get an entry-level job because they are overqualified!

Recent PhDs need to have their confidence boosted. Grad school is very good at grinding people down and making them think they suck, and that's just not true. You do have experience coming out of grad school. I was a higher education professional for ten years in grad school, and so now I'm changing careers – or more accurately changing jobs within the higher education field. That language may not be obvious, but it is true. I'm a mid-career professional.

What are some of the success stories you've seen in your (brief) time as a career coach?

I have a Q & A series on my blog where I profile people who mostly have PhDs who now work in various fields that are – or are not – easily realted to what they studied. There tends to be a period of uncertainty after a person finishes a PhD program, but afterwards people really take off. One of the first people I talked, I reached out to him because he's a vice-president at a consulting firm in Toronto, and he had a PhD in history. He talked about how for nine months after he finished his PhD, he was doing blue-collar labor with his brother-in-law. But he needed the break from academia and he didn't mind it, and it gave him the opportunity to zone in on a particular firm he wanted to work at, and he kept at it, and he's there today! If you had talked to him six months after graduation, you'd think things weren't working out with him, but if you talked to him six years later, you'd think, hey, this guy's really successful!