Why Doesn't D.C. Have a Military Parade on the Fourth of July?

On Bastille Day in Paris, the trees lining the Champs-Élysées are covered in the French tricolor. Battalion after battalion of French troops march down the avenue, gleaming bayonets attached to their Space Age rifles. Tanks, armored cars, and nuclear missiles roll past a viewing stand where the French president and his generals look on as martial music plays.

It's one of the largest military parades in the world, and it's been going on nearly every year since 1880 (except from 1940-1944, for obvious reasons). Here's what it looks like:

Here's what the Fourth of July parade down Constitution Ave. in Washington, D.C. looks like: 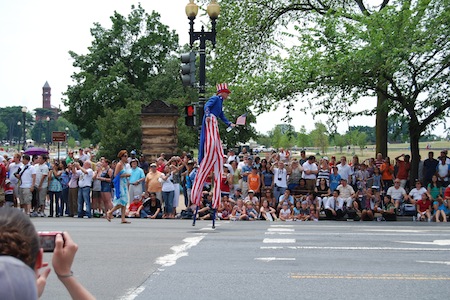 Though the United States is the world's sole superpower with the most powerful military in the world, the Fourth of July parade in Washington, D.C. features not one single military vehicle (to be fair, there usually are small detachments on parade from the Army and the Marines, but they're vastly outnumbered by high school marching bands, Revolutionary War re-enactors, baton twirlers, roller derby girls, giant inflatable Uncle Sams, unicycles, organ grinders, Hare Krishnas, cheerleaders, and of course cowboys.)

It's not as if there have never been Fourth of July military parades before – President John Adams reviewed a handful of military companies in Philadelphia on Independence Day in 1798, and Thomas Jefferson attended a military parade in Washington D.C. In 1803 and 1804. The most important military parade ever held in the capital occurred on July 4, 1861, when Abraham Lincoln reviewed some 30,000 federal troops assembled for the defense of Washington, a show of force meant to deter a potential Confederate attack on the city. Parades celebrating victory in the Spanish-American War and World War I were also held, says James R. Heintze, a professor of history at American University who has compiled a Fourth of July celebrations database.

But these have generally been the exceptions – in 1918, at the height of World War I, President Wilson reviewed not a military parade, but a pageant featuring 5,000 immigrants on the steps of the Capitol; in 1943, the highlight of celebrations in D.C. was an observance by the Oldest Inhabitants of the District of Columbia Society.

So why don't we have a military parade in Washington, D.C. on the Fourth of July?

David Waldstreicher, a professor of history at Temple University, speculates that a major reason is that the American Revolution was itself a revolt against a standing army occupying a major city. Military demonstrations in small towns were common in the early Republic (and remain so), but “American national liberty, at home at least, is associated with freedom from men in arms marching through the streets.”

More importantly, he added, “because popular sovereignty [has] to be demonstrated through the local and the participatory,” it makes sense for the Fourth of July parade in the capital to have more of a small-town, carnival-like atmosphere.

Even at the height of the Cold War in the 1950s, when hyperpatriotic displays were commonplace, the Fourth of July remained a more festive day of recreation; Harry Truman spent most of the holiday in 1952 watching a baseball game, and Dwight Eisenhower spent most of his Fourth of July holidays during his presidency playing golf. Displays of military power were reserved for Armed Forces Day, the third Saturday in May (itself a more-or-less nonevent in Washington, D.C. these days).

So if you find yourself in Washington on this Fourth of July, relax, take in the scenery, and be sure to wave at stilt-walking Uncle Sams.

And prepare yourself for fireworks. LOTS of fireworks.