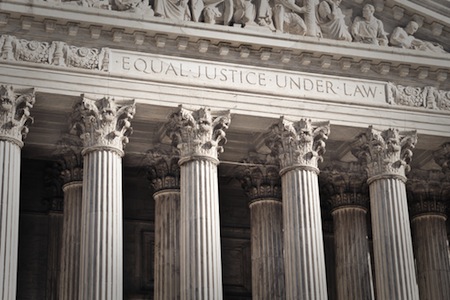 The Supreme Court's decision released Wednesday morning to strike down the Defense of Marriage Act in Windsor v. United States upheld upon arguments made by historians in an amicus brief filed by the American Historical Association.

The majority opinion acknowledges that “[b]y history and tradition, the definition and regulation of marriage has been treated as being within the authority and realm of the separate States.”

This mirrors language in the brief filed by twenty-three historians of marriage, sexuality, and constitutional law, which stated in its introduction that “[c]ontrol of marital status is reserved to the states in our federal system. Marriage has always been understood as a civil contract embodying a couple’s free consent to join in long-lasting intimate and economic union.”

George Chauncey, a professor of history and American studies at Yale, was an expert witness in both the Windsor and the related Hollingsworth v. Perry decision on California's Proposition 8 same-sex marriage ban (it was dismissed by the Court). Prof. Chauncey published an op-ed in the New York Times that will appear in print tomorrow. In it, he lauds the Court's decision, but cautions that between "endemic bullying of queer students, discrimination in housing and employment, and the surge in new H.I.V. infections," same-sex marriage will not be the final word in "the struggle for equality and dignity."

On Wednesday morning, HNN staff contacted each of the twenty-three historians for comment on the decision. The responses have been positive (“I'm thrilled!” wrote Harvard professor Nancy Cott), but almost all deferred further comment until after they had fully read the Windsor and Hollingsworth decisions, and t

Justice Samuel Alito was the only member of the Court to refer explicitly to the judgment of historians. He wrote in the main body of dissent that the majority opinion in Windsor "[arrogates] to the Court the power to decide" whether the "consent-based view of marriage" or the "traditional view" of marriage is the valid one, "a question that philosophers, historians, social scientists, and theologians are better qualified to explore."

However, the historians' amicus brief stated in its second sentence that "[m]arriage has always been understood as a civil contract embodying a couple’s free consent to join in long-lasting intimate and economic union."

Alito also wrote in a footnote that the expert testimony of Nancy Cott in the Hollingsworth case was inappropriately used by the presiding judge as "findings of fact."

Professor Cott, for her part, thinks Alito was being sarcastic. "The peculiarities of legal procedure meant that everything [presiding judge Vaughn Walker] put in his opinion had to be called 'fact' since that is what district courts do -- rule on the facts."

Elizabeth Pleck, professor emerita of history and professor of African American studies at the University of Chicago and a co-signer of the amicus brief, said that  "reflects an understanding of how he sees a culture war between traditional and modern, in which the term modern is used less often as 'popular.' ...  He thinks 'popular culture' and 'popular understanding' are bad and ... at war with tradition."