On Non-Academic Job Market, Your PhD is a Visa, Not a Passport 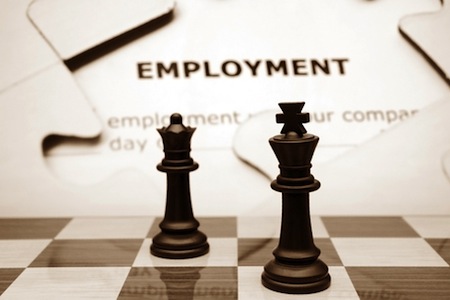 If being a professor will indeed no longer a viable career due to downward pressure from administrations and the disruptive potential of massive online open courses, as Cary Nelson darkly suggested at the American Association of Universty Professors conference in Washington, what are enterprising young graduate students and recent PhDs to do?

It's not as if the state of the academic history job market right now is particularly encouraging. Despite an uptick of 18 percent in the number of jobs advertised with the American Historical Association in 2012, the number of PhD receipts for that year alone exceeded the number of job opening by nearly one-third.

With those grim numbers in mind, I spoke to Alexandra Lord, an historian with the National Parks Service who runs the website “Beyond Academe,” a resource for historians to help make the transition to non-academic employment (she's has also written a lot on this subject for the Chronicle of Higher Education) about what grad students can do to help their chances of landing good jobs, and whether or not it's even a good idea to enroll in a history PhD program in the first place.

Lord has a PhD herself from the University of Wisconsin-Madison, and spent nearly four years working as a professor at Montana State University, Bozeman and SUNY New Paltz. She's been working for federal government since 2001, and from 2006 to 2008 sat on the board of directors of the National Council on Public History. She published Condom Nation: The U.S. Government's Sex Education Campaign from World War I to the Internet with Johns Hopkins Press in 2009.

Alexandra Lord: It's wonderful for folks to think about public history careers -- just to take one aspect of non-academic careers -- and it's the one that most people look at first when they think of leaving the academy, but the problem is there are even fewer public history jobs than there are academic jobs. I think what's going to happen is that you're going to see more and more pressure in public history, and getting a job there is going to get more competitive and more difficult.

What are these transferable skills?

Well, I'll tell you a bunch of concerns I've had on the other end of the hiring table. I've seen many PhDs believe their program has given them fantastic writing skills, but they're coming to me with ten years of grad school, and the only thing they've done is write a dissertation (and maybe a book review or an article). They demonstrate only one type of writing skill on their resume: writing for an academic audience. I have no idea of whether they can write for other types of audiences. That's a real concern.

Additionally, they may be competing with someone who has a B.A. who may have started out in a very lowly position at a very small museum, but that person may have gained incredible experience over that ten-year period writing museum texts and contributing to museum catalogs. That person is coming out with more publications -- I know, this is kind of shocking -- and with evidence that they can write for a range of audiences. They may just have a B.A. or an M.A., but they're often seen as better qualified for positions because they demonstrate a wider range of skills.

Employers are looking for the track record. In an era of tightening budgets, you don't want to -- you cannot -- make a mistake with your hire, so you want to have someone with a track record [of success]. Also, the competition in a poor economy has just increased dramatically. You're up against a hundred applicants as opposed to fifty, which means that what you need to bring to the table needs to be more diverse, address the concerns of the employer, and show the employer that you have the skills.

Say you've got a B.A. on history and you want to work in the field. Even though the non-academic job market will be undergoing degree inflation, is it really worthwhile to pursue a PhD in history when you're facing a contracting job market in all areas?

If you're pursuing a PhD with the goal of a certain specific career goal, I don't think it's an especially smart move, though it can vary from person to person (I don't like making blanket statements).

If you're going to get a PhD in history because you think this it's going to help you in your career, and that this is going to push you in to a certain type of position, I'm not sure the path is that straightforward. I think there's value in getting a PhD in history, absolutely, but the value is an intellectual value. That's what it always has been all along, to be honest. We've started complaining and seeing the PhD in some bizarre way as a vocational degree, and I think that's actually been problematic. But increasingly, for people who go into this because they think it's going to get me this type of job, that's not quite how it works anymore, if it ever so easily and clearly worked that way.

Say you've just completed your PhD from a mid-ranked state institution. You're already at a disadvantage on the academic job market, and even if you do land an academic job, it'll probably be a tenuous adjunct position which could potentially be phased out by technology. How does someone in that position be competitive on the non-academic job market?

Many people think of the PhD as the passport. It's not. It's the visa. You need to have the passport before you can use the visa. And the passport are the skills and the skillsets. That's what non-academic employers -- whether we're talking about public history positions or non-public history positions -- are looking for. They want certain types of skills and experiences. Not every PhD program is really geared toward encouraging their students to acquire this diverse range of experiences and skills. So, for those students who come out after having done a very traditional [educational] path, they're not going to have the passport. They'll have the visa, but you can't use a visa without a passport.

That's the icing, but if you don't have the cake, the icing is pointless. The cake is the skillset.

There are always grad students who see the writing on the wall, go out on their own initative and acquire all of these great experiences and wind up with an incredible resume at the end of the day. And those people -- regardless of where they went -- are going to be the most competitive on the job market.

But the person who just goes straight through the program, whether it's prestigious, second-tier, third-tier, or what ever --- they're going to have a very difficult time.