How Did Rob Ford Get Elected Mayor of Toronto, Anyway?

Bert S. Hall is professor emeritus at the Institute for History & Philosophy of Science & Technology at the University of Toronto, where he has taught since 1977. 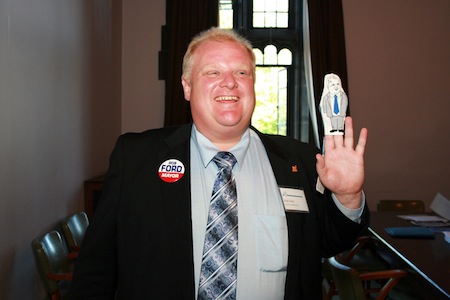 Now that allegations that Toronto mayor Rob Ford was videoed smoked crack in his drug dealer’s apartment have propelled him into headlines around the globe (though sadly the video, which was being offered to the highest bidder by his dealer, has for the moment disappeared), it seems an apropos moment to take a look back at Ford's storied career.

To begin with, Rob Ford was always the swivel-eyed loon on city council. He was elected from Etobicoke, a former suburb that was unwillingly “amalgamated” into Toronto in 1998 at the mandate of a neo-con provincial government that claimed to be pursuing “cost efficiencies” in local governments. Amalgamation meant that Toronto’s New York style of governance, with individual municipalities or boroughs represented in what was called Metro Council was replaced with a unitary one-size-fits-all city council. Ford was the revenge of the suburbanites against what they saw as domination by “downtown elites” who didn’t understand their lifestyle. They didn’t want to be identified with downtown Toronto, and Ford was the expression of their discontent.

His major point, and the subject of many of his rants, was that Toronto was waging a “war on the car,” pursuing policies favouring bicycles and streetcars. It was an interesting example of the politics of auto ownership as a wedge issue, because in Toronto, downtown dwellers, like Manhattanites, tend to use taxis, subways, bicycles, and car-sharing and to have fewer cars per household as a result -- significantly less than one, meaning many households do not own cars at all. Suburbanites, including those in what we now call the “inner suburbs” like Etobicoke, tend to own multiple vehicles, averaging around three per household. Ford came to be seen as "the car guy," the man on the side of drivers, not bicyclists. What was good for the car was good for Etobicoke.

Apart from cars, Ford was something of a one-trick pony, “I’m for the little guy. No new taxes!” Toronto’s property taxes are in fact lower on average than those of surrounding municipalities, but as you might expect, downtown dwellers tend to live in apartments, row houses, and condominiums, while the suburbanites have larger detached homes with lawns and pools. Thus they pay more in property taxes than core city folk even if the rates are the same. Once again, Ford had his wedge issue.

When he ran for mayor in 2010, everyone thought he was a joke, remembering his bizarre rants. Big mistake. There is no limit to the number of candidates who can run for mayor, and no political parties -- who would winnow the field -- are allowed in a municipal election. This means there are usually many fringe and nutbar candidates, and Ford looked like one of them. The mainstream candidates split the non-Ford vote, and by the time it looked like he was a serious contender, it was too late to stop him. He was elected in 2010 with 47 percent of the vote, which is a respectable total in any multi-party Canadian contest.

Unlike his/her counterparts in most American cities, the mayor of Toronto does not control city council or even command a majority of votes, as a prime minister might. The mayor has only one vote among fourty-four councilors. Nor can he veto an act of council. Any mayor must build a coalition for whatever he proposes, or against what he opposes, practicing the time-honoured tactics of horse-trading and favour-swapping. At the outset of his term, Ford was able to get a majority of council to repeal, for example, a $60 per annum tax on cars that car-owning suburban types found odious, and to remove some bicycle lanes he claimed slowed traffic -- a largely symbolic gesture, as other bike lanes were installed on nearby streets.

But he soon ran out of steam, first on the subject of mass transit. Ford has consistently said he favours mass transit, but only in the form of subways. Why? Because a subway does not disrupt automobile traffic. But subways are by far the most expensive form of transit to build, and Ford’s anti-tax persona meant he could find no way to fund them. This self-contradiction provoked a council revolt that revealed how inept Ford actually was at building support for his program. But on this issue too, auto ownership becomes a wedge issue.

While he is good at creating wedge issues, Ford is by far the most incompetent politician I have ever seen at building a coalition of supporters. One example among many: his long-time supporter and another hard-right councilor, Mike del Grande, was the man whom Ford chose to chair the budget committee, a critical position. Del Grande busted his hump bringing in a budget of more than $9 billion that was balanced and made only moderate cuts to programs, but it included a modest property tax increase. The day it was introduced, Ford voted against it (that tax increase, you know)! The budget passed, but del Grande, stung by Ford’s betrayal, resigned as the budget committee chair, and he remains cool to Ford even now. This is typical; Ford has alienated most of his potential supporters on council, even his natural allies, and he shows no sign of winning them back.

The drug accusations against him come as a shock, but not as a real surprise. The Ford siblings, three brothers and a sister, have a long-standing reputation on the street as either drug-users or drug dealers. The Fords are millionaires, children of a self-made businessman turned politician. They grew up in luxury. Despite Ford’s self-proclaimed Joe Lunchbucket political persona, he has never worked anywhere other than his family’s business. Now that the “respectable” newspapers have begun printing what was once only street-corner gossip, Ford’s supporters accuse them of gutter journalism, and they have a point, in that the gossip can rarely be attributed to a reputable source. (Full disclosure: I volunteer in a program to feed hot meals to street people. In addition to cooking, I sometimes talk with those who eat in the program, and I even listen to what they say.)

Polls show Torontonians are evenly split over whether the video of Ford smoking crack exists or is real. The alleged drug dealers are Somali immigrants, and they have not produced the video, in part because Ford is quite popular amongst the Somali community and the dealers are seen as having brought it unwanted attention. Three reporters claim to have seen the video, but Ford supporters accuse them of lying as part of a newspaper campaign to get rid of Ford. The result is a stand-off in the court of public opinion. Recent polls show that Ford’s electoral support is holding consistently at around 35 percent of potential voters, although there is a major strain of tribalism at work here. His support is much higher in those “inner suburbs” than in downtown Toronto.

It is important to note that there is no mechanism to remove him from office. Council cannot impeach him, and the Province of Ontario has no real power to remove him. (It could, for example, if the city were bankrupt, but in fact the city has a $248 million budget surplus from 2012.) Canada politely stepped aside when America went through its progressive phase a century ago, and there is no legal provision for recalling elected officials through the ballot box. Readers familiar with the parliamentary system might think that the city government could fall over such a scandal, but municipalities in Canada do not follow parliamentary rules. There are fixed terms for city council and pre-scheduled elections; Toronto’s comes in October, 2014.

Moreover, even if ten videos showing Ford smoking crack were to surface, strictly speaking he would not be guilty of any crime. In Canada, ingesting cocaine is not illegal per se, although possessing, buying or selling it is a felony. Crown prosecutors would have to prove he bought it. Ford acts like a guilty felon, not out of fear of the law, but because of what being seen on video smoking crack would do to his reputation among potential supporters.

Parenthetically, there is one faint possibility Ford could be removed. In late 2012, he was convicted of a conflict-of-interest charge, one of the few offenses that can get a mayor turned out of office in Ontario. He appealed, and the conviction was overturned on appeal. The overturning was itself appealed to the Supreme Court of Canada, which just might hear the case and reinstate the original conviction. But all that would take months, if it happens at all, and it would in any case be completely unrelated to the cocaine allegations.

The upshot: Ford won’t resign no matter what, even if the alleged video surfaces and is authenticated. The only methods to get rid of him are straight from an episode of The Borgias. Second, he wants to run again in 2014. He seems to think if he stonewalls the allegations, he can repeat the victory that brought him into office in 2010. But his “solid” support of 35 percent is not enough to win the next election unless the opposition splits again (which is possible, but unlikely). The Conservative Party of Ontario (the official opposition at the moment) is backpedalling away at high speed, because Ford is costing the conservative brand almost all its credibility, and that means his big money backers from 2010 are jumping ship. The anti-Ford opposition is quietly happy to let him sputter on, gathering more and more negative headlines, until the whole sorry show runs its course.

So, strange as it may sound to outsiders, Ford cannot be impeached, recalled or removed from office. He could not be convicted of a crime even if videos showing him smoking crack were to appear in vast numbers. The mayor is stonewalling all attempts to dig any deeper, and he shows no inclination to resign. He has lost any apparent influence over city council, and he is too politically radioactive to interest the major parties. The police are effectively helpless to do anything at all. Toronto is divided into hostile tribes on the subject of the mayor’s behaviour, and the next election is sixteen months away. Stay tuned for further developments...