Women and the Language of Peace Protest

Ruth Rosen, a former columnist for the Los Angeles Times, is a Professor Emeriti of History at U.C. Davis and a Scholar in Residence at the Center for the Study of Right-Wing Movements at U.C. Berkeley. Her most recent book is "The World Split Open: How the Modern Women’s Movement Changed America." 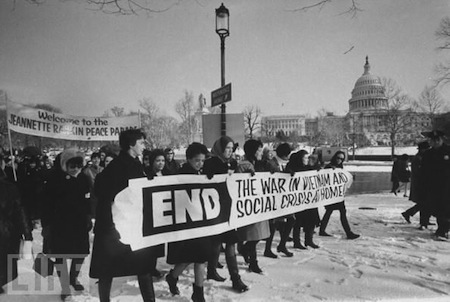 Throughout history, women have often leveraged their legitimacy and status as mothers -- or even as grandmothers -- to protest war and violence. In the United States, for example, Carrie Chapman Catt and Jane Addams founded the Woman’s Peace Party in 1915, which eventually became the Women’s International League for Peace and Freedom. Like so many other women of their generation,  they argued that women’s special life-giving and preserving role as mothers gave them a unique right to seek universal disarmament in the 1920s.

Between the early years of the twentieth century and the 1960s, union activists and socialists often based their opposition to war on their view of themselves as workers or revolutionaries. Still, the tradition of women protesting as mothers persisted.

That tradition was dramatically challenged on January 15, 1968 by American young feminists. On that day, about 5,000 women peace activists from two generations gathered in Washington D.C. to demand the immediate withdrawal of troops from Vietnam. They called themselves the Jeanette Rankin Brigade, in honor of the first woman elected to the U.S.Congress, a pacifist, who had voted against both world wars.

Interspersed among the crowd were approximately 500 young feminists, who, in a controversial act of defiance, decided to symbolically bury “Traditional Womanhood” at the protest. The ritual was hardly spontaneous. After months of consciousness raising, they had decided that “the Brigade was playing upon the traditional female role in the classic manner. They came as wives, mothers and mourners; that is, tearful and passive reactors to the actions of men rather than organizing as women to change that definition of femininity to something other than a synonym for weakness, political impotence, and tears.”  They demanded to be heard as citizens, not as mothers.

After the coalition of women had protested and delivered their petition to the U.S. Senate, about 500 young feminists issued black-bordered invitations to the rest of the Brigade, “joyfully” inviting them to join the torchlight burial of Traditional Womanhood, “who passed with a sigh to her Great Reward this year of the Lord, 1968, after 3,000 years of bolstering the ego of Warmakers and aiding the cause of war.”

They carried a dummy of “Traditional Womanhood” and symbolically buried her at the military’s Arlington National Cemetery. Larger than life, the dummy rode on a bier “complete with feminine getup, blank face, blonde curls and candles. Hanging from the bier were disposable items such as curlers, garters and hairspray. Streamers floated off of it and banners screamed “DON’T CRY, Resist!” The funeral entourage sang songs specially written for the occasion, lamenting “women’s traditional role which encourages men to develop aggression and militarism to prove their masculinity.”

The rest of the Jeanette Ranking Brigade snubbed their invitation. Many of the older women failed to understand why these young women needed to attack activists like the Women Strike for Peace, a group that had successfully fought above-ground atomic bomb testing in the early 1960s and The International League for Peace and Freedom, which had protested the Vietnam War. What was their problem?  Why did they need to engage in such adolescent theatrics and make women’s liberation an issue at an all-women’s antiwar demonstration in the nation’s capital? The war, in their view, was more important.

The generation gap could not be bridged. For the young women, the burial of Traditional Womanhood was a critique of the Feminine Mystique of the 1950s, the pervasive cultural imperative that women should live exclusively through their husbands and children.  Many of these young feminists were not yet mothers and they insisted that “Our children will not become victims of our unconscious resentments and our displaced ambitions.” Determined to avoid the plight of their mothers’ generation, the young women decided to protest as citizens. The ghost that haunted them wore an apron, lived submissively, and protested as a mother.

But the Burial of Traditional Womanhood also expressed the rage of young civil rights and antiwar activists who had gradually come to realize the power that their men in the movement and elsewhere held over their lives.  As they buried Traditional Womanhood, they declared their right to resist war as autonomous beings, not merely as contingent appendages of men and their families. Rejecting the biological determinism of the 1950s, they stressed the similarity between the sexes, rather than the differences. Though they failed to gain many recruits, their counter protest helped consolidate and publicize the rapidly expanding women’s liberation movement all across the nation. Sadly, the legacy of that demonstration is rarely included in histories of the 1960s or antiwar protests against the Vietnam War.

Nor did the attack against protesting as mothers last very long. As women peace activists aged, the terror of the 1950s retreated and their respect for women’s experience and motherhood grew. By the 1980s many of these women peace activists were no longer distressed by the “motherist” rhetoric they had rejected in 1968.

Some used the language of motherhood tactically, believing that as mothers, rather than as feminists, they had greater legitimacy. Women’s Action for Nuclear Disarment (WAND), founded by Helen Caldicott, happily exploited Mother’s Day and other symbols of motherhood to promote women’s organizations against militarism. Aware of how effective women, as mothers, had fought for an end to violence in Argentina, Ireland and South Africa, many peace activists no longer worried about “traditional womanhood".

Still others used a new eco-feminist discourse that viewed women as preservers of the planet and men as plunderers of the earth. The women who participated in the Women’s Pentagon Action in 1980, for example, valorized everything female. Emotionality---excessive displays of weeping, raging, chanting and mourning--- were honored and favorably compared to men’s sublimation of feeling into violence. Traditions inherited—or newly invented-- from women’s past were used to glorify women’s magical healing powers. At a variety of peace encampments in the United States and England, thousands of women in effect said that they had a moral responsibility to wrest control of the earth from men. “For many,” explained two participants at the Greenham Common Women’s Peace Encampment, “The issue is about reclaiming power for ourselves, and not remaining victims of a male-defined world characterized by violence.”

Although they employed a discourse that presumed women morally superior—much as mothers had done—they also succeeded in drawing the world’s attention to the danger of nuclear war.

So does it matter which language women use when they fight against war and violence?  There is no correct answer. Women should use the discourse that best reflects their own sensibilities and one that resonates in their own society. Every discourse, however, creates its own limitations. Protesting as mothers is often more effective than organizing as feminists, though it may limit women’s rights as citizens.  Organizing as feminist peace protesters may offend so many people that women’s demands for peace may be ignored.

The truth is, no matter what discourse they employ, the very act of fighting against war and violence turns women into political actors, which inevitably expands their traditional role in their families and society.

Since 2000, however, women peace activists have successfully employed the language of human rights on the global stage, declaring women’s rights as human rights, challenging violence against women, and ensuring that women be engaged in fighting militarism before, during and after war.

Human rights activists are certainly not the first to argue that women should fight militarism as citizens. Betty Friedan once said, “My own revulsion toward the war in Vietnam does not flow from my breast, nor even from the fact of my draft-age sons, but from my moral conscience as a human being and as an American.  A few years before her death, Simone de Beauvoir expressed her firm conviction that “women should desire peace as human beings, not as women.”

The historical significance of the Burial of Traditional Womanhood is that it set the stage for a moment in the future when women peace activists could, without apology,  use the language of human rights to protest war and militarism—not just as mothers or morally superior protectors of the earth—but as citizens of the world.

Quotes in this article are taken from an article by the author in the journal Vietnam Generation ( out of print) , Summer-Fall Vol 1, no. 4. 1989, entitled 'Gender and the War: Men, Women and Vietnam'.

This article is published under a Creative Commons licence.
comments powered by Disqus