Van Gosse is associate professor of history at Franklin and Marshall College. He is the author of "Rethinking the New Left: An Interpretative History" and the forthcoming "We Are Americans: Black Politics and the Origins of Black Power in Antebellum America." 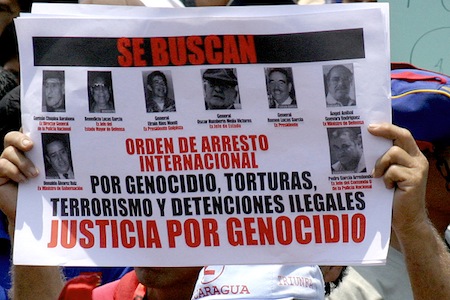 Despite the May 20 ruling by Guatemala’s Constitutional Court, which overturned the original verdict on procedural grounds, the May 10 conviction of that country’s former head of state, General Efrain Rios Montt, for the genocide of Guatemala’s Mayan people, could be a defining event in modern history.

For now, the original trial will pick up where it stood on April 19, when the court had heard all of the prosecution’s evidence, and most of the defense’s. Guatemala’s unrepentant oligarchy, and the lawyers (and judges) who represent them, will do everything they can to derail final resolution and sentencing. But regardless of what happens next, and whether the eighty-year-old genocidaire ever goes to jail, the case reverberates: Guatemala’s steely Attorney General, Claudia Paz y Paz, is likely to move forward with more prosecutions, and next door in El Salvador, bells are beginning to toll for the generals who ran death squads and ordered massacres. Here at home, too, the case sends signals to both current and former U.S. policymakers, if we step back and look at our own history.

Many commentators have stressed that for the first time a living head of state has been convicted of genocide in his or her own country, yet another precedent in establishing the international rule of law regarding human rights and war crimes: first, that a crime against humanity can be prosecuted anywhere, regardless of national sovereignty or executive prerogative; second, that it is the degree of political responsibility for the crime which determines guilt, beyond the question of an individual’s proximity to, or actual participation in, its execution.

Rios Montt’s conviction builds upon the indictment of General Augusto Pinochet by the Spanish judge Baltasar Garzon in 1998, and prosecutions at the International Court of Justice (ICJ) of Rwandan and Bosnian leaders, as well as the launch and increasing strength of the International Criminal Court. Even if endless appeals keep Rios Montt out of jail, his being forced to face his accusers as they described the extermination of entire villages is a new fact which no leader considering “scorched earth” tactics against a domestic insurgency, or even that leader’s foreign backers, can ignore. Indeed, putting the Pinochet and Rios Montt cases together as precedents suggests the potential for indictments not just in small countries like Guatemala or Chile, but perhaps Moscow, Paris, Beijing, or Washington, D.C.

Rios Montt’s conviction therefore has significant implications for the rest of the world including, most assuredly, us Americans. He was not convicted of personally rounding up Mayan children to be killed, or firing a weapon. His signature was not found on any document authorizing the extermination of the Ixil, the particular indigenous people whose genocide was charged. Rather, he was the intellectual author, the head of state approving military plans naming the Ixil as the internal enemy to be eliminated, in the same way that high-ranking German generals were found responsible for crimes against humanity at Nuremberg, although they personally avoided the killing fields in Byelorussia, and never signed orders specifying that three million Soviet POWs be starved to death. Like Rios Montt, they had authority and were therefore responsible.

Given the verdict in Guatemala, and the findings of the ICJ in a range of cases, why should the legal responsibility for mass murder stop at the water’s edge? That is the question we should be asking, as a people committed to human rights. If we don’t question ourselves, most assuredly others will, and an ill-timed event right on our own Hudson River puts this question front-and-center. On May 23, the Intrepid Museum here in New York City will give former secretary of state Henry Kissinger its annual Freedom Award “for his distinguished career defending the values of freedom and democracy.” Yet, if significant political responsibility for the mass murder of civilians is a crime under international law, Mr. Kissinger should face trial. Consider the following short list of countries in which he might be indicted, like General Pinochet, and perhaps convicted, like General Rios Montt:

In Laos and Cambodia, Mr. Kissinger, as national security adviser to President Nixon, was personally responsible for the systematic, high-altitude bombing of both those countries in 1969-1973, illegal under both U.S. and international law, which resulted in the deaths of hundreds of thousands of civilians.

In Vietnam, he oversaw the “Christmas bombing” of Hanoi and Haiphong in December 1972, aimed explicitly at the destruction of civilian facilities, with massive loss of life.

In Chile, he supervised the CIA in trying to block Salvador Allende’s election as president in 1970, and then undermining his government, employing assassination, terrorism, and sabotage, followed by all-out support for General Pinochet’s junta after the U.S.-backed coup on September 11, 1973, as it engaged in large-scale torture and extrajudicial murders of its opponents.

In East Timor, he and President Gerald Ford met with the Indonesian president, General Suharto, in December 1975 and sanctioned an invasion of the island, a former Portuguese colony, which resulted in the killing of an estimated 200,000 East Timorese, a third of the population;

Finally, in 1976, Secretary Kissinger met with the foreign minister for Argentina’s military junta six months after it began its “dirty war,” which led to the disappearance of an estimated 30,000 people, and told him “Look, our basic attitude is that we would like you to succeed. I have an old-fashioned view that friends ought to be supported. What is not understood in the United States is that you have a civil war. We read about human rights problems but not the context. The quicker you succeed the better. If there are things that have to be done, you should do them quickly." He also censured the U.S. ambassador, Robert Hill, for chiding the generals about their human rights abuses.

None of these allegations, or the evidence for them, largely from official U.S. records, is new. What is new is how the international community holds national leaders accountable for what was done under their watch. Given the United States’ overwhelming authority in international affairs, our support or the lack thereof has had decisive political weight, and it would be exceedingly naïve to pretend otherwise. No one has ever suggested that Secretary Kissinger, the famous practitioner of realpolitik, was in any way unworldly; he knew exactly what he was doing in the above instances. But history and the law have caught up with him (and with us); the moral or legal claim for leaders as being somehow above the law is in tatters. At the very least, it’s high time that we stop honoring Henry Kissinger.