Pete Daniel is an agricultural historian, receiving his PhD from the University of Maryland. His latest book is "Dispossession: Discrimination against African American Farmers in the Age of Civil Rights." 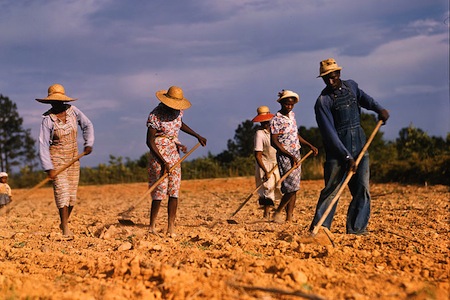 The New York Times recently published a report that focused on fraud in disbursing settlements for U.S. Department of Agriculture (USDA) discrimination among African American, Indian, Hispanic, and women farmers. Reporter Sharon LaFraniere wrote of “career lawyers and agency officials who had argued that there was no credible evidence of widespread discrimination.”

But there is a long train of evidence of discrimination, much of it from the USDA records at the National Archives, as well as from records of the U.S. Commission on Civil Rights, National Sharecroppers Fund, NAACP, SNCC, and land grant universities, among other sources. Since the mid-1960s, USDA officials have continually denied discrimination, but the record indicates otherwise.

In February 1997, Secretary of Agriculture Dan Glickman’s Civil Rights Action Team, after twelve listening sessions, issued a damning report on USDA discrimination, citing “bias, hostility, greed, ruthlessness, rudeness, and indifference” aimed at women and minority farmers. At the time there were 495 pending discrimination complaints at USDA, half of them two years old or older. Judge Paul L. Friedman cited some of the most egregious cases in his landmark Pigford v. Glickman decision in April 1999. The consent decree flowing from Friedman’s decision was extremely complex, for few records existed of discrimination, in part because the Reagan administration’s USDA civil rights office trashed discrimination complaints and also because county agricultural committees discarded records involving acreage allotments and loans after several years.

LaFraniere seems unaware of how agribusiness and agrigovernment have cooperated to transform the rural countryside, how USDA programs, many of them contradictory, serve a vast constituency, how impervious the Department has been to criticism and reform, and she largely ignores the mountain of documented discrimination in haste to blame women and minority farmers for seeking restitution. The fraud charges seem more important than the discrimination that set the cases in motion. The Pigford case should be read not as a spigot of easy money but rather as a blueprint on how to obtain retribution for discrimination. That lawyers and politicians complicated the equation of payments and shysters held out their greedy hands does not diminish Judge Friedman’s finding of discrimination. Had employees impartially executed USDA policy, there would have been no discrimination suits or attorneys and shysters rushing to file claims.

When SNCC in the mid-1960s organized African American farmers to vote in ASCS elections, county offices issued inaccurate maps, neglected to send black women ballots, manipulated ballots to confuse black farmers, all with the complicity of the Washington USDA office. There was also violence, intimidation, and economic retaliation. Some black farmers were eventually elected to community committees and a few alternates elected to powerful county committees, but the system remained tightly controlled by whites. Millions of dollars flowed through these committees that in many ways shaped rural life. As the civil rights movement wound down, USDA administrators belittled SNCC’s contribution to organizing black farmers in ASCS elections, outrageously claiming that it was the USDA that encouraged black participation.

The Pigford case allows claims going back to 1981 when the USDA civil rights office, such as it was, ignored discrimination complaints. My recent book, Dispossession: Discrimination Against African American Farmers in the Age of Civil Rights, deals primarily with the years before 1981. Beginning with its 1965 study, Equal Opportunity in Farm Programs, the U.S. Commission on Civil Rights issued a series of reports on continuing USDA discrimination. My book focused on three USDA agencies: the Agricultural Stabilization and Conservation Service (ASCS), the Federal Extension Service (FES), and the Farmers Home Administration (FHA, later FmHA, still later FSA). These agencies ruled on acreage allotments, provided information from experiment stations and land grant universities, and shaped rural credit.

The book includes numerous instances of discrimination by these three agencies, and it took a major court case to challenge the way white land grant universities manipulated the integration of the Extension Service in southern states. When Willie Strain was moved from Tuskegee University to Auburn University in the summer of 1965, for example, it was the end not only of The Negro Farmer, the newspaper he edited, but also of any productive work. When he approached his integrated Auburn office each day, the white employees turned their backs, and, given no duties, he spent most of the day in the library. After attending graduate school for another advanced degree, he returned but despite his qualifications was passed over for an opening to head the department. He sued. Judge Frank M. Johnson’s order in the class action Strain v. Philpott case not only illuminated the degree of discrimination throughout the Alabama Cooperative Extension Service but also prescribed remedies to correct it. Similar cases challenged extension service discrimination in most southern states.

The FHA was notorious in its shameful treatment of black farmers. “It has always been my dream to own and farm my own land,” Timothy Pigford testified before a Congressional Committee in 1984. He traced his treatment by FHA officials in eastern North Carolina who had denied him a loan to buy a farm, given him poor advice, and suggested that he give up renting the land he tilled. The poor advice, mock concern, and refusal to loan money for a farm resonated with the experiences of many African American farmers over the years. Southern FHA officials ruthlessly eliminated black farmers, denying loans outright, loaning enough to start the crop year but not finish it, or loaning more than the farmer could repay and foreclosing.

It is customary to explain the black exodus from the land as the consequence of science and technology, and, of course, tractors, picking machines, and pesticides did revolutionize farming. New Deal agricultural subsidies supported primarily landed farmers who could adopt the latest tools, and sharecroppers, tenants, and small farmers faded away. In the quarter century after 1950, over a half million African American farms went under, leaving only 45,000. When Judge Friedman handed down the Pigford decision in 1999, he observed there were but 18,000 left. Many white farmers also went under, but if black farmers had left agriculture at the same rate as whites, a USDA official calculated, there would have been 300,000 left in 1990. In these figures, we can glimpse the extent but not the wages of discrimination. The significant history of African American farmers deserves more serious study by historians and less sensationalism by reporters.