David Austin Walsh is editor of the History News Network. 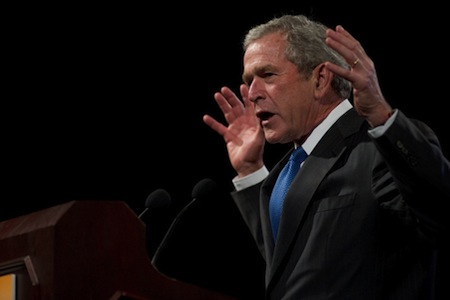 Former president George W. Bush has had his best week in years. His public approval ratings have hit a seven-year high, publications around the country have published articles reassessing his legacy, and he was warmly joined by all of the living former presidents at the dedication of his new presidential library at Southern Methodist University in Dallas, Texas.

President Bush received harsh criticism from some of the nation's leading scholars. even while still in office -- Sean Wilentz famously penned a Rolling Stone cover story in which he named George W. Bush as one of the worst presidents in history in 2006 -- and the 2010 Siena College Research Institute presidential rankings survey ranked the Bush administration 31st out of 43, within the lowest quartile of all the presidencies.

The past week, however, saw Julian Zelizer pen an article for CNN entitled "History's still out on George W. Bush," while Stephen Knott, writing for the Washington Post, claimed that the former president has been the victim of a "rush to judgment" by historians.

So will historians revise their collective opinion of George W. Bush?

The History News Network conducted an informal poll on Thursday asking American historians from the nation’s top research universities and liberal arts colleges to grade the presidency of George W. Bush on an A-F scale, based on fourteen different metrics, ranging from foreign policy to the economy to transparency and accountability.

Sixty-four historians responded. Thirty-five -- over half -- rated his presidency an outright failure.

“Thank you, God, for this opportunity,” one professor, a faculty member at one of the service academies, wrote in a comment. “He was not qualified to be president and it showed for eight long years.”

President Bush received his lowest marks for his handling of the economy (his tax cuts were “absolutely irresponsible,” wrote one historian), foreign policy (“followed the neo-conservative utopian dream of enforcing democracy from above, which was a devastating failure for the United States”), and transparency (“the most opaque administration since [Richard] Nixon.”)

There was also some begruding praise. "He was generally effective at getting most things through Congress," wrote one otherwise fierce critic. Others commended him for the bailouts in response to the financial crisis, though at the same time he was criticized for the "lack of robust oversight and regulation of [the] financial sector."

President Bush's communication ability, long the subject of mockery during his time in office, was also complimented: "Definitely better than Coolidge."

Respondents were asked to grade President Bush on the following metrics (the average letter grade accompanies each metric) and provide justifications for their marks:

"Pre-emptive war has no place in the American historical tradition. He justified it with false evidence and lied to the American people. He accepted the use of torture, thumbed his nose at international treaties like the Geneva Conventions, and relied on faulty interpretations of the U.S. Constitution to get his way. A president is supposed to protect and defend the Constitution, which he clearly did not do."

"The least articulate president of the twentieth century."

"Bush's tax cuts were absolutely irresponsible, did nothing to improved the condition of middle- or working-class Americans and only enriched an elite few. This coupled with the billions of dollars we spent on two wars was disastrous for the nation."

"The selection of Dick Cheney as his vice presidential running mate was perhaps not an 'executive appointment' in the strict sense, but it was the functional equivalent, and it was the worst choice in American history."

"[Executive appointments] a mixed bag; both secretaries of state were good, chiefs of staff were solid. Bob Gates was an excellent appointment."

--professor at a university in New York City

"We did reinvent the national security state under his leadership but not in a good way; he allowed the looting of Tehran, declared premature victory and oversaw a civil war while ideological transforming a socialist state into an ultra free market laboratory. He never caught Bin Laden who walked from Afghanistan to Pakistan under his nose."

--professor at a small liberal arts college on the East Coast

"Bush was far more concerned with striking and maintaining a posture of leadership than demonstrating real leadership by summoning the nation to step up and solve its most important problems."

--professor at one of the service academies

"He had a vision -- stronger and weaker at different points in the presidency -- but it proved to be a generally disastrous one."