Remembering "Letter from a Birmingham Jail"

Randal Maurice Jelks is associate professor of American Studies and African American Studies at the University of Kansas. Visit his website randalmauricejelks.com and follow him on Twitter @drjelks. Learn more and keep up with events at the book’s Facebook page. 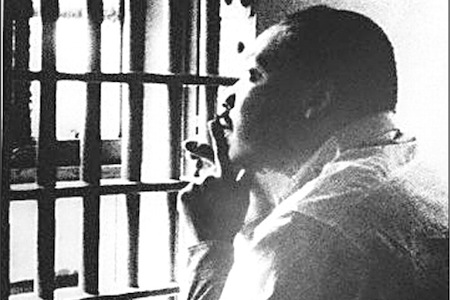 When the Southern Christian Leadership Council (SCLC) staff received the handwritten “Letter from a Birmingham Jail” and publicized it, the letter became almost instantly canonical. Long before the advent of social media, SCLC’s marketers swiftly put the letter before the wider public through the auspices of the Friends Service Committee, which initially wanted to title Martin Luther King Jr.’s missive “Tears of Love.” But the Reverend Wyatt T. Walker, SCLC’s chief strategist, insisted that it be titled in New Testament epistle fashion “Letter from a Birmingham Jail.”

Like the Bible itself, the letter was editorially redacted and smoothed out. It made its way in full-page advertisements in Ebony and the New York Times, into solicitation letters to SCLC donors, and produced on vinyl by Motown Records. In addition, the accompanying photograph of Martin Luther King Jr. looking meditatively through his Birmingham Jefferson County Courthouse cell added yet another layer of emotional poignancy to the letter. And the moment it reached the public, it gave the protest in Birmingham an ethical and moral significance both at home and abroad.

The Birmingham protest was the turning point in the southern struggle of the national movement. The nation’s -- and the world’s -- eyes were riveted upon Birmingham, with teenagers and school-age children going to jail gleefully singing, forcing middle-class black school teachers and the steadily employed working class to join the mass movement. Birmingham was the theater that determined whether the civil rights movement could out-maneuver Southern politicians by appealing to a broader American public through isolating the “Southern way of life.”

We can easily look back and think that most reasonable Americans should have understood what this struggle concerned, but the truth was -- as the television show Mad Men so elegantly depicts about this era -- they didn’t. Most Americans’ thinking defaulted to bromides found in the 1954 changes to the “Pledge of Allegiance,” which were more in response to the Brown v. Board of Education disruption of Plessy v. Ferguson’s enshrinement of Jim Crow. Cold War religiosity used the fear of communism to pronounce we were “one nation under God, indivisible.” The Birmingham protest demonstrated that the United States was far from being “indivisible.”

When King responded to the eight Birmingham clerics, he was looking beyond them. He understood how deeply Americans held claim to worship of the state. This peculiar American faith -- thanks to Will Herberg’s 1955 Protestant, Catholic, Jew -- got boiled down to a sweeping civil-religious consensus, the Judeo-Christian tradition.

However, King’s letter undermined those sweeping generalizations. He knew that religious expression had sacralized militarism and violence, from the southern “Lost Cause” and Ku Klux Klan to the northern conservative movement of the John Birch Society. These varying forms of civil religiosity made most Americans more fearful of the “godless communist” than outraged by the daily racial injustices that took place on buses, on the job, in the courts, and at local schools.

Where was the moral indignation regarding those who lived in a tiered society that gave privilege to a male and white elite while limiting the life chances of blacks and browns, women and children, and the working poor? The disinherited were citizens too; they deserved constitutional protections no matter how one felt about their individual status -- noble or reprehensible. The Birmingham clergy who critiqued the movement’s tactics had gone along with the normalcy of an American civil religion and King objected to this kind of faith.

“Letter from a Birmingham Jail” is a prophetic reminder that faith alone does not confer innocence or good intent. To people of faith, whatever those faiths are, the epistle points out that even transcendent belief can be easily distorted to hide the dynamics of state power, status, hierarchy, economic exploitation, and discriminatory bigotry.

King’s letter scribbled on the edges of a newspaper is a democratic critique and draws attention to public aspect of faith traditions. In a democracy, faiths must always be self-critical and publicly criticized. It doesn’t matter the faith, either. One can believe in apostolic succession, the salvific power of the capitalist marketplace, Marxist economic determinism, Sharia law, the efficacy of the Bible, the Koran, or strict adherence to Talmudic tradition.

None of these observant rituals can be an excuse for unjust daily practices. There was no equivocation in King’s mind: “Injustice anywhere is a threat to justice everywhere.”