The Pope and the Nuns

Margaret McGuinness is professor of religion and executive director of mission integration at La Salle University in Philadelphia, Pennsylvania. She is the author of "Called to Serve: A History of Nuns in America." 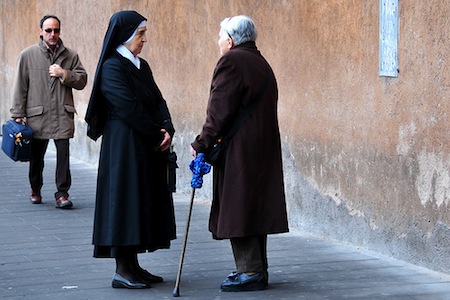 As soon as it was determined that the smoke was indeed white, thousands of Facebook posts, tweets, and texts began to document reactions to the election of Pope Francis. Initial cryptic comments included: “This is a surprise”; “Jesuit pope”; “Love him already”; and some cautious remarks about his aversion to liberation theology, especially as practiced by Latin American priests and nuns. Since that day, the election and recent installation of Pope Francis to the throne of Peter has continued to generate articles, commentaries, and conversations on social media sites expressing opinions about the first Latin American pontiff, and suggesting an agenda that would, in their opinion, revitalize an ancient church that is struggling to remain vibrant in the twenty-first century.

It will be interesting to see what sort of relationship -- if any -- will develop between Pope Francis and U.S. communities of women religious, many of whom have had their differences with Catholic clerical leaders over the years. Most American women religious, the prevailing institutional hierarchical argument claims, have deviated from traditional Catholic teachings, especially those related to abortion, same-sex marriage, and an all-male priesthood. In addition, sisters have moved too far from their convents and are now engaged in advocacy work—or ministry, depending on your point of view—that focuses too much on the poor and underserved and not enough on the promulgation of Catholic doctrine.

When examining the history of women religious, it is hard to ignore the role the papacy played in leading sisters and nuns to embrace the world and its problems. Although Boniface VIII’s 1298 bull, or proclamation, Periculoso,ordered nuns to live a cloistered life, not all Catholic women were called to serve the church in this way. When Angela Merici formed a “company of virgina in 1532, they were to “give charity where charity was needed,” and not remain isolated from people and their needs. By the time the community was approved by Pope Paul III in1544, about 150 women were affiliated with the Ursulines, as they came to be called.

Despite the concerns of both Boniface VIII and some contemporary church leaders, several twentieth-century popes have supported active ministries for sisters and nuns. In 1929, Pius XI encouraged sisters to receive the education necessary for staffing parochial schools. His successor, Pius XII, echoed his predecessor’s views, and even went a step further, calling for the spiritual renewal of women’s religious communities in light of the foundress, as well as adaptation [of the community] to contemporary needs. Almost thirty years later, in 1958, Pius XII urged religious communities to abandon those practices that kept them from being in touch with the modern world. By this time, sisters had taken Pius XI’s earlier admonition to heart. Focused on the education of nuns, the Sister Formation Conference (SFC), organized in response to the concerns of Pius XI and Pius XII, developed the Everett curriculum, which focused on the liberal arts, Catholic social teaching, and ways to effect “structural change in society.”

Sister Annette Walters, CSJ, who was appointed executive director of the SFC in 1960, firmly believed that the education of sisters and nuns was of utmost importance to the American Catholic Church in the latter half of the twentieth century. She described sisters as “first line fighters in the political, social, and cultural struggles of our time,” and believed they could best meet the needs of the contemporary world by becoming involved in new ministries of social justice on both national and international levels.

As a result of the work of the SFC, the number of sister-teachers who completed three years of college before embarking on a ministry of education increased from 16 percent to 80 percent between 1955 and 1964. When Pope John XXIII opened the first session of the Second Vatican Council in 1962, women religious were clearly ready to “read the signs of the times” and enter into new areas of ministry.  Women were excluded from the first two sessions of the council, but twenty-three women were invited to attend the final two sessions. Ten of the invitees were women religious, and one, Sister Mary Luke Tobin, SL, was an American. U.S. sisters were especially interested in several documents produced by the bishops at the Council—notably Lumen Gentium (1964), Gaudium et Spes (1965), and the Decree on the Renewal of Religious Life (Perfectae Caritatis, 1965)—because they believed that they called sisters to work with the poor in cooperation with clergy and laity; no longer placed clergy above the laity; and mandated them to return to the original reasons behind the founding of their communities. In other words, they were to read the “signs of the times” and meet the needs of twentieth-century Americans.

The changing role of sisters and nuns, combined with a decrease in numbers, led some church leaders to conclude that women religious were becoming more militant in their critique of church teaching. In January 2009, the Vatican announced that it planned to conduct an apostolic visitation, or investigation, of U.S. sisters. The focus was on active religious communities; contemplative congregations were exempted from the study because their ministry of prayer was not seen as antithetical to church doctrine. Overall, American Catholics supported women religious, believing that were leading the way in demonstrating how to live the Gospel. In the end, the Leadership Conference of Women Religious (LCWR) received high marks for their humanitarian work, but criticism for promoting issues that were described as incompatible with Catholicism.

It is too soon to know how Pope Francis will respond to American women religious. Most sisters seem to taking an attitude of “wait and see.” Sister Simone Campbell, SSS, executive director of the social justice lobby Network, notes that church leaders will never admit that the investigation was a bad idea, but the whole issue could be tabled and eventually forgotten. Others point out that the new pontiff has been critical of Latin American religious communities sympathetic to Marxism. Whatever course of action the new pope chooses—and he may choose none at all—American women religious of the twenty-first century will engage in their traditional ministries of education, health care, and social service. At the same time, they will not abandon the work they have undertaken since the 1960s—work that involves serving the undocumented, the poor, and those living on death rows throughout our nation’s prisons. As they have since Angela Merici and her small band of sisters began to serve wherever they were needed, American sisters and nuns will continue to read the signs of the times and minister in ways that reflect the societal needs of the contemporary world.

Correction: an earlier version of this article misidentified the author as professor of history and chair of the department at La Salle University. She is actually professor of religion and executive director of mission integration.