D. M. Giangreco is the author of The United States Army: The Definitive Illustrated History, from which this article is excerpted.  Mr. Giangreco served as an editor at Military Review, U.S. Army Command and General Staff College, Fort Leavenworth, Kansas, for 20 years. He is the author of twelve books including the forthcoming Hell to Pay: Operation Downfall and the Invasion of Japan, 1945-1947. 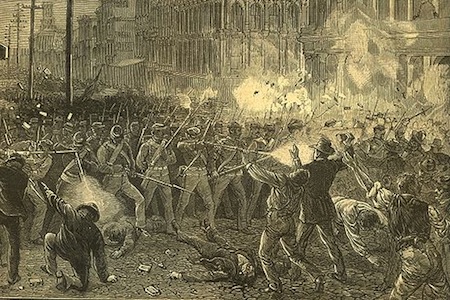 6th Regiment of the Maryland National Guard opening fire on an armed mob of railroad strikers during the Great Railway Strike of 1877. The Regular Army was often called upon to quell labor unrest during that year.

A compromise between the political parties in the angrily disputed presidential election of 1876 placed Republican Rutherford B. Hayes in office and ended the last vestiges of Reconstruction in the South. In short order, the already-depleted U.S. Army units attempting to counter an ascendant Ku Klux Klan were transferred to duties elsewhere as the Service braced itself for a round of personnel cuts now that the mission in the South was at an end. What happened next caught even some of the most pessimist soldiers by surprise.

The winding down of Reconstruction had seen corresponding reductions in the Army to roughly 39,000 men in 1869, 30,000 the following year, and 25,000 in 1874. In 1877, the House of Representatives, now under the control of Southern Democrats, moved to cut the Army -- “the unholy instrument of repression” during Reconstruction -- to 17,000, then 15,000, lest the federal government be tempted to use it again domestically.  Proposed amendments and legislative maneuvering also resulted in the 54th Congress adjourning in March before they had passed an appropriations bill for the coming fiscal year and, for the sake of political expediency, the president did not call Congress back into session to rectify the matter. Thus, as of June 30, 1877, neither officers nor enlisted men, be they soldier, sailor, or marine, was able to draw even a dime of pay. The delegation from Texas, however, broke ranks with the Southern Democrats and made it clear that they wanted even more troops because of the ongoing problems with the Apaches along the Mexican border and continued raiding by the Cheyenne.

Texans weren’t the only citizens alarmed by situation. Ironically, the shenanigans on Capitol Hill occurred at the same time that the Army was experiencing its most active period since the Civil War. The death of Colonel George Armstrong Custer and destruction of much of his 7th Cavalry had occurred just the previous year.  Large forces stayed on the alert in the central Plains in case the still-dangerous Sioux, Cheyenne, or Kiowa left their reservations in significant numbers. Warfare also continued with the elusive Apache, and a sizable chunk of the US Army -- elements of the 1st, 2nd, 5th, and 7th Cavalry; the 5th Infantry; and the 4th Artillery -- spent four months chasing the Nez Perce across rugged terrain of Oregon, Idaho, and Montana until they were finally cornered by Colonel Nelson A. Miles.  But while the Indian Wars became the stuff of legends, the domestic unrest that accompanied the growing pains of an increasingly industrial society are now largely forgotten.

Until passage of the Posse Comitatus Act 1878 restricting the use of Federal forces without authorization by either “the Constitution or ... Congress,” they had frequently been called to action by governors, federal marshals, and even local authorities (the most famous example of this being Lieutenant Colonel Robert E. Lee and a marine detachment during the seizure of the Harpers Ferry Arsenal in 1859). This become so widely abused, with individual soldiers and units being dragooned onto assisting in the serving of such things as county revenue collections, that Secretary of War Edwin M. Stanton issued an 1868 directive that such requests “must be held subordinate to [the soldiers’] paramount duty as members of the permanent military body.”

Secretary Stanton ordered that “troops can act only in their proper organized capacity, under their own officers, and in obedience to the immediate orders of those officers.” Commanders could decide for themselves if a request was proper and of a sufficiently imperative nature to justify the immediate use of their men, but were told that if time allowed, they were to request guidance from the president (really, however, their next higher Army headquarters) first, “whether it be for the execution of civil process or to suppress insurrection.”

During the Great Railway Strike of 1877, which began the month after soldiers’ pay was cut off, the threat of national anarchy and disruption of mail service prompted the Army to rush soldiers from three states and two territories to occupy rail yards in Chicago and St. Louis. Troops from seventeen other states were directed to move immediately to riot-torn areas of West Virginia, Kentucky, Maryland, and Pennsylvania, virtually emptying every post in Major General Winfield Scott Hancock’s Military Division of the Atlantic in the process. Some 60,000 Regulars and militia were ultimately called out and the Army found that simply providing a restrained but strong show of force -- with bayonets glistening -- was enough to bring order to the chaos, as Hancock reported, “by their presence alone.”

Congressman and future president James A. Garfield of Ohio became the Army’s fiercest advocate on Capitol Hill. Garfield, who had fought as a brigade commander at Shiloh, rose to major general, and helped negotiate the compromise that brought Hayes to the presidency, was incensed at the treatment of the soldiers and told the House that they “might as well take command of the pickets; [and] say where the guards are to be posted.” Coming close on the heels of the Little Big Horn disaster and winter campaign against the Sioux, Garfield spoke for most Americans when he berated his colleagues:

It is not enough that our poor, unpaid, starving army shall, by the delay of the House, be doomed to many days of starvations while their numbers are reduced by sickness and Indian warfare only to learn that a merciful Congress proposes still further to reduce them? That at last the commander-in-chief shall be shackled and the army itself shackled and finally that the House of Representatives shall itself take command of the army and post its Cavalry regiments where they choose?

Enlisted men received a degree of protection as the Army could continue to contract for food, clothing and other basic needs, but the lack of funding prevented them from having money for other “essentials” such as beer and female companionship. Officers had it even worse. Whether unmarried or at the head of a household, they had been responsible for covering the cost of all personal necessities, including their uniforms, out of their own meager salaries since 1870. Many, unable to live on their savings, were forced to borrow money at usurious rates against their future pay or live off the charity of relatives and friends. A lucky few received assistance the Louisiana National Bank which offered loans without interest to Army officers, and Americans pitched in to help in whatever way they could. For example, some hotels like the Occidental in San Francisco let it be known that they would present no bills to officers in transit.

The situation was finally rectified in November 1877 when House members, under mounting pressure from constituents, including those from the South, produced an appropriations bill and authorized a force of 25,000 men -- a troop strength that would remain largely unchanged for the next two decades.