The Iraq War: A Failure of Presidential Leadership 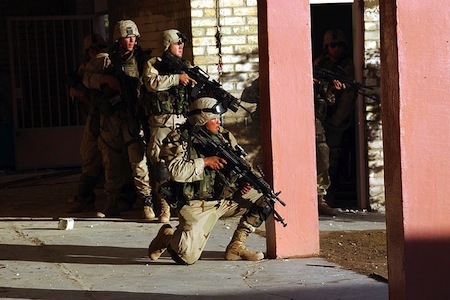 In Supreme Command: Soldiers, Statesmen, and Leadership in Wartime, Eliot Cohen argues that civilian leaders need to be deeply involved in the creation and execution of military strategy. His examination of Abraham Lincoln, Georges Clemenceau, Winston Churchill, and David Ben-Gurion shows that civilian leaders who immerse themselves in politico-military decision-making fare better than those who leave the most important decisions to their generals. Cohen published his book in 2002, just in time for President George W. Bush to read it during a vacation in Texas, about six months before U.S. forces invaded Iraq.

Regrettably, the president failed to heed the advice. During the run-up to the war, President Bush acted more as visionary and cheerleader than supreme commander, ignoring the difficult realities of securing Iraq in the wake of an invasion and leaving the most important details of invasion planning to Secretary of Defense Donald Rumsfeld and U.S. military leaders. This delegation of authority might have worked, except that Secretary Rumsfeld was intent on proving that he could transform the U.S. military into a lighter, faster, more technologically savvy force. He would use the wars in Iraq as a laboratory to prove his theory.

Rumsfeld browbeat his commanders into accepting a much lighter invasion force than they desired. When the Chief of Staff of the U.S. Army, General Eric Shinseki, told the Senate Armed Services Committee that stabilizing Iraq in the wake of the invasion would take several hundred thousand troops, he was immediately castigated by Rumsfeld, who called his estimate “wildly off the mark.” Officers who disagreed with the light footprint approach were ostracized. Suggestions that the administration was ignoring the political, economic, and cultural realities of reconstructing Iraq in the wake of an invasion were rebuffed. Through it all, President Bush remained blissfully unaware of the pending catastrophe.

When the three-week invasion succeeded in toppling Saddam Hussein’s regime, President Bush basked in the glow of triumph under a "mission accomplished" banner. Then the wheels came off the enterprise. The president’s hand-picked plenipotentiary in Iraq, Ambassador Jerry Bremer, de-Ba’athified Iraqi society and disbanded the Iraqi Army, decrees that marginalized Sunni Arabs and fed a growing insurgency. Bush allowed both decisions to occur without debate in the National Security Council. With the war won, after all, he could afford to continue to delegate the details of strategy to his subordinates while doing, in the words of his father, the “vision thing.”

The unpleasant facts on the ground in Iraq, however, refused to go away. Presented with evidence of a growing insurgency, President Bush decided that one simply did not exist. “I don’t want to read in the New York Times that we are facing an insurgency,” he announced in a meeting of the National Security Council on November 11, 2003. “I don’t want anyone in the cabinet to say it is an insurgency. I don’t think we are there yet.” This statement was uttered in the midst of the first insurgent Ramadan offensive. But if the opposition in Iraq were merely composed of “dead enders,” then no uncomfortable strategic questions needed to be asked -- or answered.

President Bush remained committed to victory in Iraq, but was disconnected with the creation of a strategy to achieve it. The creation of Iraqi security forces (“As they stand up, we will stand down”) gave way to “Clear-Hold-Build,” but these were concepts developed by others and merely adopted by the president. Throughout it all he held steadfast to the belief that the generals in Baghdad and Tampa knew best, and deferred to their advice.

Then, in February 2006, terrorists destroyed the al-Askari shrine in Samarra, sparking a full-scale sectarian civil war in Iraq. Bodies piled up in the streets as Shi’a militias and Sunni insurgents and terrorists terrorized the population. U.S. and Iraqi military commanders could not ignore the increasing violence, but their prescription was merely a continuation of the strategy that over the past three years had failed to stem the insurgency. U.S. and Iraqi forces continued to hunt down, kill, and capture terrorist and insurgent operatives. At the same time, coalition forces accelerated the transition of security responsibilities to Iraqi security forces that were fundamentally unprepared to accept them, and in some cases were themselves complicit in the sectarian bloodletting.

President Bush belatedly came to the conclusion that the United States and its allies were losing the Iraq War. During the fall of 2006 he directed a review that developed a new strategy, based on the concepts of a counterinsurgency manual developed jointly by U.S. Army General David Petraeus and Marine General James Mattis. The president authorized more than twenty thousand reinforcements, but more importantly, the first priority would now be the protection of the Iraqi people. Space does not allow full consideration of the surge strategy here, but suffice it to say that it acted as a catalyst to enable other factors -- such as the tribal revolt against al-Qaeda in Iraq -- to succeed. By the end of the surge in the summer of 2008, violence in Iraq had returned to the level of early 2004, and politics once again became the operative mechanism through which Iraqis looked to determine the distribution of power and resources in their country.

Iraq was a war begun badly for vague strategic reasons and nearly lost. Not until President Bush delved into the details of the strategy to prosecute the war were coalition and Iraqi forces able to arrest the downward spiral into civil war. The outcome of the war may not be as U.S. and Iraqi leaders had hoped, but Iraq today at least has a chance to recover. The example of the Iraq War, as with so many others, argues for more involvement by political leaders in the development and execution of strategy. To leave such matters to the military begs the adoption of operational and tactical solutions to problems that are fundamentally strategic in nature. And as we have learned over the past ten years, such an outcome is usually a strategy for defeat.