Juan Cole is the Richard P. Mitchell Professor of History and the director of the Center for South Asian Studies at the University of Michigan.  His latest book, "Engaging the Muslim World," is just out in a revised paperback edition from Palgrave Macmillan. 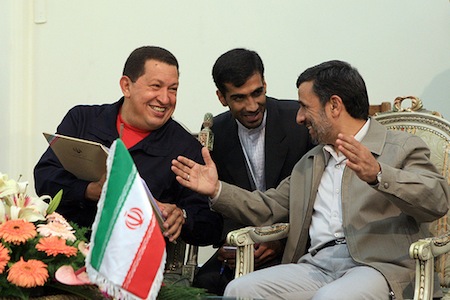 The foreign policy of late Venezuelan leader Hugo Chavez imagined that socialism and anti-imperialism are the same thing, and that he could lead a new sort of socialist international. (He also seems not to have distinguished between anti-Americanism and anti-imperialism.) These considerations shaped his Middle East policy in ways that were contradictory and hypocritical. Chavez, supposedly a man of the people, stood against Iran’s 2009 Green Movement, against the Libyan Revolution to overthrow the erratic Muammar Qaddafi, against the Syrian Revolution.

Iran, while it is a profound critic of the United States, is not a socialist country. Its gini coefficient or measurement of social inequality now is probably worse than in the days of Mohammad Reza Pahlavi, the monarch overthrown in 1979. As with all oil states, its public sector is large, but it also has a lively private sector, which is dominated by wealthy oligarchs, including some of the ayatollahs and institutions like the Revolutionary Guards. Iran is a right-wing theocracy, not a left-wing socialist state. If Chavez could embrace a repressive theocracy run for the benefit of wealthy oligarchs, merely because it is anti-American, then of what logical acrobatics was he incapable?

Likewise, Chavez’s support for the Qaddafis in Libya was based on an extremely superficial reading of Libyan political, economic and social system. The Qaddafi family looted the country of its wealth, wasting it on ruinous African adventures or squirreling it away in Western banks and real estate. Libya was not a socialist country but a post-Soviet, Russian-style oligarchy. Ordinary Libyans, especially in the east of the country, were increasingly cut out of any share in the country’s oil bonanza. I was shocked last year on my visit there how dowdy and relatively undeveloped Benghazi is; Qaddafi had clearly punished the country’s second largest city by declining to spend much money on it. Nor was Qaddafi of 2010 even particularly anti-imperialist. He had welcomed European investment in his oil and gas industries and had much improved relations with the Bush administration. Far from being anti-American, Qaddafi had a thing for Condi Rice and called Barack Obama his African son. Chavez’s own ally, Iran, largely supported the struggle of the Libyan people against what one ayatollah called "this shell-shocked individual," though of course Iran condemned the NATO air intervention.

Syria is also no longer a socialist country. The relatives and hangers-on of the ruling al-Assad family transformed themselves into billionaires, using their government contacts to gain lucrative contracts and establishing monopolies. Working Syrians were facing declining real wages in the past decade and very high youth unemployment. Poverty was increasing. Nor was Syria particularly anti-imperialist. In the 1970s and 1980s in Lebanon, Ba'athist Syria had gladly helped defeat the Palestine Liberation Organization and its Druze and Muslim allies on behalf of the pro-American, right wing Phalangist Party supported by some Christians. After 9/11, the Syrian government tortured al-Qaeda suspects for the Bush administration. It was the U.S. Congress that cut Syria off in 2003, not the other way around. And when Obama reopened the U.S. embassy and sought better ties in 2009, al-Assad was perfectly happy to accept.

Whatever one thought of Chavez, he did genuinely improve the lot of the Venezuelan working classes. He won elections and was genuinely popular for this reason. He appears not to have been able to imagine that Khamenei, Qaddafi and al-Assad are rather less interested in an ideal like the public welfare.

Unable to perform a basic political-economy analysis that would demonstrate that Iran, Libya and Syria had abandoned whatever socialist commitments they once had (Iran of the ayatollahs had never been progressive), Chavez in his own mind appears to have thought that they were analogous to the Bolivia of Eva Morales or the Ecuador of Rafael Correa. Emphatically not so.

He also imagined these countries as anti-American (only Iran really is), and appears to have believed that such a stance covers a multitude of sins on the part of their elites -- looting the country, feathering their own nests, and authoritarian dictatorship and police states that deploy arbitrary arrest and torture. In the case of Libya and Syria, the regimes showed a willingness to massacre thousands of their own citizens with bombings from the air and heavy artillery and tank barrages fired into civilian neighborhoods. U.S. imperialism has been guilty of great crimes in Central America and often backed right-wing dictators in Latin America generally. You understand how it made a bad impression on Chavez. But the U.S. supported Algeria and many other decolonizing countries in the 1960s and "imperialism" is a thin reed as an all-encompassing analytical tool. There is a sense in which capitalist Russia is seeking a superpower supremacy in parts of the Middle East. Chavez was happy to align with that development.

Venezuela’s stances on the Middle East under Chavez were not usually important in any practical sense. Despite a lot of verbiage, its economic cooperation with Iran has been minor for both countries, and Chavez did no more than make angry speeches about Libya and Syria. Good Iranian-Venezuelan relations provoked a great deal of hysteria in the U.S., but they don’t actually appear to have been consequential, either in the sphere of economics or in that of security. Despite dark predictions by U.S. hawks, it is probably not very important whether Venezuela keeps its current foreign policy or alters it.

But Chavez did sully his legacy as a progressive with his superficial reading of what "anti-imperialism" entails and his inability to see the neo-liberal police states of the Middle East for what they had become.