Donald Ritchie: The Senate's Expert on the Senate

Mariana Villa was an HNN intern and a student at Buena Vista University. 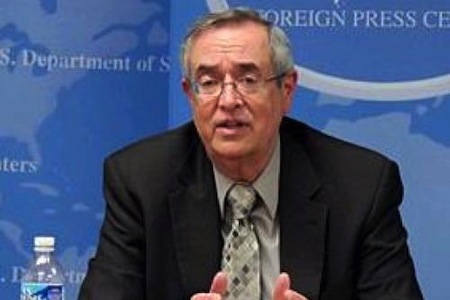 Part Two of a profile of the official historians of the U.S. House of Representatives and the U.S. Senate. To read Part One, a profile of House Historian Matthew Wasniewski, click here.

Shortly after the Watergate scandal that shook the nation between 1972 and 1974, a letter was written that reminded majority and minority leaders in Congress of the importance of preserving the records of the legislative branch.

The power behind Arthur M. Schlesinger’s words inspired the creation of a new office. Working together, Democratic and Republican leaders established the Senate Historical Office in 1975.  The Historical Office is currently headed by Dr. Donald Ritchie.

Ritchie, a native of Queens, N.Y., was educated at the City College of New York and the University of Maryland. While working towards his graduate degree at Maryland, the U.S. government dropped graduate education as a deferment to serve in Vietnam.  As a result, he was drafted and inducted into the Marine Corps in June 1969 and was stationed at Pearl Harbor.

While at Hawaii, Ritchie continued his education, taking courses at the University of Hawaii.  Two years later he was able to return to Maryland and finish his graduate studies.  He received his doctorate in 1975.

At this point in time, however, the U.S. market was in a bad shape following the stock market crash of 1973-1974.  Ritchie recalls, “For a year, I taught at any university I could drive to, and worked part-time for the American Historical Association.” Fortunately, the Senate’s creation of the Senate Historical Office in 1975 resulted in a career opportunity for him to serve as the associate historian under the chief historian at the time, Richard A. Baker.

He has been with the Senate Historical Office since 1976 and was appointed to Baker’s post following the latter’s retirement in 2009.

When asked about an individual that has had a lasting impact on his career, Ritchie goes back to his graduate school years at Maryland and credits his advisor, political historian Horace Samuel Merrill. “Sam and his wife Marion practically adopted their graduate students,” he reminisces. Under Merrill’s guidance which included his “Merrill Rules” for clear writing, Ritchie and his fellow graduate students were encouraged to push themselves to produce theses that would eventually be made into books.

Merrill’s and his wife’s activism and commitment to social justice and equality as well as their involvement in historical associations where they “seemed to know everyone,” are reflected in Ritchie’s own life. He has been an active member and leader within Congress committees as well as within organizations like the American Historical Association, International Oral History Association, and the National History Center, to name a few.

“They set the standards for many of their students to attain that continue to influence my personal and professional life.”

Watergate catalyzed the beginning of a new era for the Senate. Changes in the Senate’s membership and staff, ideological changes within the parties, and the integration of new technologies, like the computer, marked the beginning of change.  And as Ritchie claims, “We came along just in time to document these changes.”

Though this Office was established in 1975, it does not mean that the Senate has not been keeping records before that time. It has done so since 1789.

Until the creation of the National Archives in 1936, records were stored in the Capitol’s attic and basement. However, since its establishment, the Historical Office has taken these records and made them better organized and more accessible than ever before.

With its mission to “promote the history of the Senate,” the Historical Office oversees a variety of duties. It’s expansive collection of statistics and data allows it to answer questions posed by anyone from senators and staff to scholars and the media, as well as the general public.  As a nonpartisan entity, it seeks only to provide accurate and reliable information.  It achieves this duty by conducting oral history interviews, editing previously closed records for publication, drafting occasional speeches for senators on historic occasions, planning exhibits, conferences and other commemorations. Its archivists work with the Senate committees to transfer their past records to the National Archives and help senators get their papers into libraries, archives, and historical societies.  The Office also employs a photographic historian; their job is to collect and preserve historical photographs for use in exhibits and publications and makes them available to authors, documentary makers, and the news media.

The Historical Office is an invaluable resource to the Senate. “As a very traditional institution that changes slowly over time, the Senate bases a great deal of its legislative activities on precedents and is eager to know when and why those precedents were established.” Within the office, Ritchie and the associate historian, Betty K. Koed, attend weekly party conference luncheons and open the proceedings with “historical minutes,” placing their proceedings into historical context.  When freshmen senators are elected, the historian participates in their orientation program and takes them and their staffs on tours of the Capitol.

Aside from the administrative responsibilities that his post demands, Ritchie’s responsibilities within the Historical Office vary on whether or not the Senate is in session.  When the Senate is not meeting, the historians are freer to do their regular assignments, which can include research and writing on long-term projects.  When the Senate is meeting, the Office is much busier as phones ring more frequently and more e-mail pours in.  Called “straight shooters,” the Senate Historical Office is also utilized by journalists because it does not slant the information in favor of one party or another. Ritchie states that the Office is especially busy “when the Senate is involved in something everyone regards as historical: a controversial nomination, a major treaty, the impeachment trial of a federal official.”

“Consistently,” he claims, “the single best part of my job has been sitting down face-to-face with fascinating individuals and recording their reminiscences in oral history interviews.”  These interviews provide a wealth of information for current and future researchers.

Back when he was an undergrad student at CCNY, before embarking on his 36-year journey at the United States Senate Historical Office, Ritchie had at one point envisioned himself teaching high school students.  Though he set off on a different path, Ritchie has been able to educate students as well as the general public.  Amongst his works -- some of which are award-winning books on subjects including Franklin Roosevelt, the Constitution, the Senate, and the government -- are several high school history books.  He also taught for ten years in the Cornell in Washington program during the evenings from 1990-2000.

When it comes to his job as chief historian for the U.S. Senate, he says, “I have a front row seat for the best show in town.”