Kelsey McKernie is a staff writer for the History News Network. She is a graduate of Berry College in Floyd, Georgia, where she majored in history.

Part One of a profile of the official historians of the U.S. House of Representatives and the U.S. Senate. To read Part Two, a profile of Senate Historian Donald Richie, click here.

Most historians, if asked to describe their dream job, would list among its main perks plenty of time for research, the ability to work closely with other historians in the field, and, depending on their level of extroversion, the chance to interact directly with the public. Fortunately for any historians with an interest in American political history, that job does exist, under the title of Historian for the United States House of Representatives. Unfortunately, it has already been filled by Dr. Matthew Wasniewski, and he has no plans of leaving it any time soon. 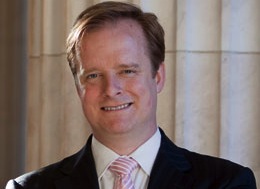 Wasniewski was appointed to the position in 2010, in a rare show of cooperation between then-Speaker of the House Nancy Pelosi and Republican Leader John Boehner. Previously, he had served as the historian for the Office of History and Preservation, which fell under the domain of the House Clerk, and these two positions were combined upon his appointment to House Historian.

Cheerfully optimistic (a rare trait among historians) and full of enthusiasm for his work, Wasniewski is well aware of his good fortune. He is also quick to confess that, until his sophomore year of college, House Historian was not at all the sort of job he had imagined for himself.

Growing up around the battlefields of northern Virginia, Wasniewski early on developed an interest in military history, reinforced by frequent trips to historic sites and the “visceral experience” of digging up Civil War bullets with his father. “There’s nothing like a physical object to draw you into history,” he recalled in a recent interview with HNN.

By the time he got to James Madison University as an undergraduate, however, his interests had turned from history to journalism. He wrote for the school newspaper, covering sports, for all four years of college. It was only thanks to the persuasion of his two history-major roommates that he enrolled in a history methodology class, and found himself hooked. He decided to double major, but journalism was still his goal.

Upon graduating in 1991 he found a job as a sports editor with the now-extinct Fauquier County newspaper, The Fauquier Citizen. Despite the enjoyable work and interesting assignments, however, he soon realized that it did not involve the kind of in-depth research and writing style he wanted. And so, after little over a year in journalism, he returned to James Madison to pursue a master’s in American history.

Two years later, he had completed his master’s and begun his doctorate at the University of Maryland, focusing his dissertation on the life and career of Walter Lippman, the Cold War columnist and critic of American policy during the 1940s-60s. During his final year of study, he took a part-time job at the Capitol Historical Society, a private non-profit organization founded in 1962 to study and promote the history of the US Capital and Congress—the first organization to do so, as the Senate and House history offices themselves were not created until 1975 and 1983, respectively. He quickly moved up to full-time, and for the next four years he did both communications work and historical research, even helping to edit several books published by the Society.

Then, in 2002, a job in the House Clerk’s office opened up, and Wasniewski put in his application. He was hired, and became the Clerk historian. In this position he was responsible for the major print publications of the House, and of Congress as a whole. He helped maintain the biographical directory of Congress and other reference materials, and worked closely with the Senate Historical Office on a series of books on women and minorities in Congress (the next book in the series, on Hispanic-Americans, is due to be released later this year). He also got to know Dr. Robert Remini, the House Historian at the time, whose office had recently begun an oral history program.

When Dr. Remini retired in 2010 and Wasniewski was appointed as his replacement, the two offices merged. He was now responsible for both the major print publications of the House, and the oral history program. “A lot of the day to day work is the same,” he said of the new role. “Our primary job is being here for members and staff, and being able to answer any institutional question they’ve got.”

In addition to answering questions for current members, Wasniewski receives frequent calls from the press and the general public, ranging from curiosity about distant relatives who served in Congress to questions about political “firsts” and precedents.

In order to both encourage and satisfy such public interest, Wasniewski’s office developed a new webpage, which went online in late December of last year. Entitled History, Art & Archives, Wasniewski described it as bringing together “all three fundamental pieces of House heritage.” Visitors can learn about past and current members through biographical profiles, read records from past Congresses dating back to the very first in 1789, and view artifacts and artwork, many of which are not on public display.

Wasniewski’s favorite part of the new webpage, however, is its showcase of the House’s expanded oral history program. “Increasingly over the last four to five years a lot of our work [has been] doing oral history interviews with longtime staff, former members, and even sitting members,” he explained. “Folks who’ve been around for decades, who have great institutional perspectives… and know the stories that don’t necessarily end up in the official record.”

The House oral history program is a point of great pride for Wasniewski, though he gives most of the credit to the Senate Historical Office for first pioneering the idea. “We might not like to always admit it,” he said, “but in this case we followed the example set by the Senate. [Senate historian] Don Ritchie has been doing oral history since the 70s.”

Late to the oral history game they may be, but the House has more than caught up, and Wasniewski hopes that their program will help the general public develop a better understanding of the institution. “The House is such a big institution that it’s hard for people to connect with,” he admitted. “It becomes this monolithic entity. Part of [our] job is to make it more accessible, by giving them a little toehold to begin to scale it through biography or interesting anecdotes and stories… Stories are what hook people.”

Fortunately, the House is rife with stories. “I learn new things every day,” Wasniewski said. He recalled researching the history of the House page program, which dates back to 1800, for an upcoming book. In the process he discovered an oral history interview with Frank Mitchell, who was appointed page on April 14, 1965 and was widely heralded as the first African-American page to serve the House. After a little more research, however, Wasniewski and his team were shocked to discover that Mitchell was, in fact, the second African-American page—and that the first had actually been appointed all the way back in 1871 by a member from Virginia.

Such discoveries are only part of what Wasniewski says he learns through his work. Working in the House has also given him an up-close view of the current political divisions that have received so much commentary in recent years, and he finds the situation less alarming than some. “Things that are presented in the media as unprecedented often have a longer heritage to them,” he observed. “[O]ne of these is the whole notion of partisanship.”

In truth, “the House has always been a partisan institution. During the 1850s the House was bitterly divided over slavery: one floor fight in 1858 involved over 30 members… and that was not an isolated incident.” Knowing some of that history, he said, gives him a sense of perspective on current politics.

This historical perspective is also part of the reason Wasniewski is so passionate about his work. He recognizes that he is not the only one who stands to learn from it.  “The House is such an old and populous institution,” he said. “[T]here are stories everywhere and history that’s still to be written.”

Even more exciting, he added, is the opportunity for his office to fill the void he sees within the academic community, and between the academic community and the general public. “By providing the stories and information that we do, and acting as a reference point for the public, the press, and people here on the Hill, we fill a need.”

Wasniewski is dedicated to filling that need, and he hopes that in doing so his office will inspire more young historians to study the institutional history of the United States, rather than ceding it over to the political scientists as has been done over the last few decades. He would also like to see more acceptance of public historians within the academic community, and more encouragement of students to consider it as a career path.

“I think the market and the economy are driving students to be more creative in what [they] can do with a degree,” he noted, and added that he hopes it will cause more students to see the value of public history. “There’s a living wage, [and] it combines scholarly work and dealing with the public, to make history that may have only been talked about in smaller academic circles accessible to people in the general public.”

At the same time, “public historians also inform the academic side of things” by offering academic historians important data, information, and research strategies to help them complete their scholarly works.

“There ought to be a synergy between the two,” he concluded. “When it works properly, there is.”

There are probably few historians better qualified, and better placed, to encourage that synergy. Wasniewski considers it rewarding work, so much so that he has not even considered what he might like to do further down the road. At some point, he said, he would like to turn his dissertation on Walter Lippmann into a book, but he is in no rush. There is plenty of work to be done before then, and he could not be happier to do it.

“I’ve got one of the best public history jobs out there,” he said. “I have a front row seat for the history that happens here, but I also get to dig into some of the deep past… I can’t think of anything better for anyone who is interested in political history.”