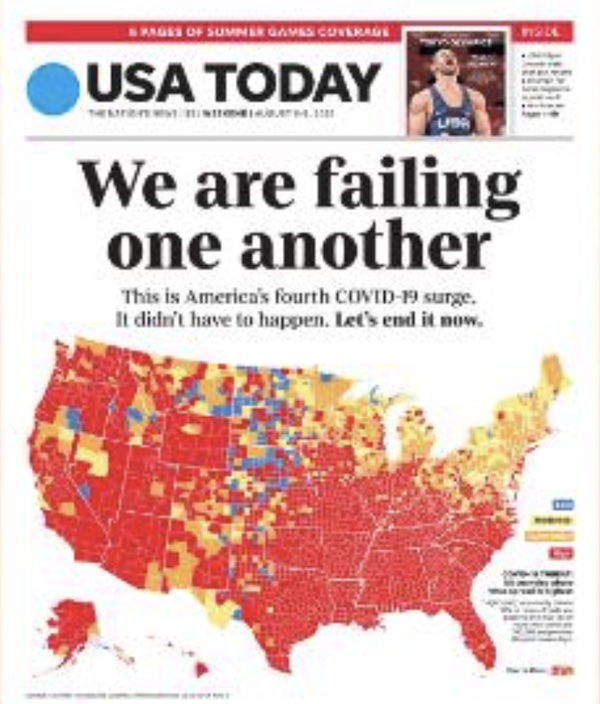 I spent the last 45 years studying the history of this country.  But after the last 4 years I can truly say I didn't understand it, cynical though I often was about the ugly disfiguring patches that no Band-Aid could hide.

But a mass cult built around an old man known for lying and grifting who bronzes his face each day?  Didn't see that happening.  Nor did I anticipate that tens of millions would refuse a free vaccine that could save others' lives  –  and their own.

And cynical as I was I never thought that the politicians these millions elected would be so cowed by their chosen leader that almost every one of them would go along with his wild schemes and lies.

It's said that the past is a foreign country.  But with each passing day I can't escape the feeling that it's the present I don't understand.  Knowing our history hasn't made it easier to come to terms with the present.  If anything, it's been a hindrance.

It's gotten in the way of me seeing what is in front of my own eyes.  It's made me want to excuse what's happening or to downplay it.

Realizing that this country is not what I thought it was is disillusioning.  Which is strange.  I spent my whole career trying to see things clearly as they are and not as I'd wish them to be.

I wrote three books bursting the myths of American history. Then I wrote a book showing the unsavory lengths to which presidents went to gain power and keep it.

After George W. Bush, in order to justify the invasion of Iraq, convinced Americans that the leader of Iraq was connected somehow to 9-11,  I wrote a book calling out Americans for their gullibility:  Just How Stupid Are We?

Because I wanted to understand the underlying forces shaping Americans' support for Bush's war I spent the next seven years searching for answers in the scientific literature concerning human behavior.

In the course of my study I read books and papers on Evolutionary Psychology, social psychology, and even neuroscience.  In the book I wrote summarizing my research  –  Political Animals:  How Our Stone-Age Brain Gets in the Way of Smart Politics  –  I devoted the bulk of the pages to a discussion of our susceptibility to lies.

The literature shows that human beings are capable, productive -- and often plain wrong.  They think they are good at detecting lies but aren't.  They believe they have empathy for others but often don't. They are confident they can read other people but often can't.  This is true of human beings around the world living in vastly different environments.

And still nothing I learned prepared me for the country I find myself living in today.  History had convinced me that Americans wouldn't elect a wild demagogue as president and wouldn't stand by him after it was proven (over and over again) that he lies to them.  History was wrong.

I haven't felt the urge to write lately, but this piece needed to be written and so I wrote it.  It concerns, at bottom, the debate historians have been having about Donald Trump:  Is he sui generis or inevitable?  As a historian I have always believed that everything has a history and that events don't just happen.  Through careful analysis of the past we can demonstrate how the events that capture the headlines emerge from changes over time in a particular place.

But even taking into account the serendipity of events it always seemed clear to me that history seldom conjures up a  genuine surprise. Things happen for a reason that can be fully accounted for after a careful review.  Thus, even 9-11, though a shock, was not a surprise.  Terrorists had been blowing up buildings and killing people for decades in the Middle East.  On numerous occasions they had hijacked airplanes.  That no one until Osama bin Laden had been brazen or daring enough to think of crashing a hijacked plane into a building until 9-11 hardly changed the calculus of history. So shocked as I was by 9-11 it didn't force me to rethink my views about the way history happens.

While I can reassure myself that in his racist demagoguery Trump is like George Wallace, and in his prevaricating he's like Joe McCarthy, and that the GOP's exploitation of race runs like a strong thread through the history of the past half century (since the passage of the Voting Rights Act), and that on numerous occasions Americans have demonized outsiders from the Irish in the 1840s to Chinese in the 1880s to Japanese-Americans in the 1940s, nothing prepared me for the embrace and continuing adoration of Donald Trump by a major political party.

That still stumps me.  So, for that matter, does the ongoing resistance to the Covid-19 vaccines.

Some historians, such as Heather Cox Richardson in How the South Won the Civil War: Oligarchy, Democracy and the Continuing Fight for the Soul of America, see strong parallels between the forces of oligarchy  in the 19th century and those today in the 21st, noting the parallels between the ideology of southern slaveholders, western silver mine owners and Trumpie Republicans.  These parallels are striking, no doubt.  In the old South and the Wild West oligarchs celebrated rule by the rich.  Who does that sound like?  But it seems too simple to me to draw a straight line through American history from oligarchs in the past to those of the present.  While I highly respect Richardson's work and am in awe of her research and broad knowledge I'm more impressed by the differences between then and now than the similarities.  Something has changed.

Still, history is not irrelevant.  It is helpful to know that our history is replete with instances of racism, xenophobia, and other signs of moral depravity.  We'd really feel lost if we weren't aware of Jim Crow, Juan Crow, and McCarthyism.  (Which is why it's vital that school children are exposed to the truth about American history, at least in the higher grades.) And while white people by and large haven't faced the assaults on democracy we are seeing now and can anticipate in the future, black Americans have, and familiarizing ourselves with their experience can teach us lessons about resistance and endurance. What history has taught white Americans is that the unfolding of history is the unfolding of human freedom, from the broadening of the suffrage to males without property to female suffrage and gay marriage.  What black Americans have learned is that rights can be taken away. That is the lesson they learned when whites put an end to Reconstruction.

To those who think a coup couldn't happen here in America there's the unpleasant fact that we've already had one.  In 1898 white Redeemers in Wilmington, North Carolina violently staged a coup against a coalition of blacks and white Populists who had managed to win an election to take control of city government. A knowledge of history is therefore not nothing.

But the present challenge requires us to look with fresh eyes on our country.  As Lincoln said, writing in a different time but in one which resonates today, “The dogmas of the quiet past are inadequate to the stormy present. The occasion is piled high with difficulty and we must rise with the occasion. As our case is new, we must think anew and act anew. We must disenthrall ourselves, and then we shall save our country.”

Rereading my own post several days after I wrote it I realized that I didn't fully address an obvious question. Did I really misread the past?  Maybe I understood American history correctly.  Maybe in the past a Donald Trump was impossible for a variety of reasons:  the elite's control over our politics and media, the strength of the party gatekeepers, the absence of paths to power by people existing outside the normal political structures, the enduring assumption that each new generation will do better than the preceding generation, the self-confidence of white people, the absence of a grievance-based culture, etc.

Once the circumstances that shaped our politics changed -- once the gatekeepers lost control, once social media empowered the extreme ranks of voters, once the white majority concluded they live in a zero sum society and that every step forward for minorities is a step backward for the majority -- our society changed and with it our politics and our history.  In other words, maybe I understood this country just fine but the country changed.

Our task is to learn to live in the country we actually live in.  This won't be easy.